This battle is between the AMP Suit, the Amplified Mobility Platform and the Tiger Tank, Tiger 1. They are metal war machines but, only one can come out on top.

Amplified Mobility Platform or ("AMP" Suit) is a distant descendant of the Earth's first exoskeleton in the mid 21st century. It was improved during military services in a myriad of combat theaters- from arctic to jungle to desert- over the decades. Sealed and pressured models for toxic environments were developed as well; the suit was used on the moon and Mars expeditions and for the colonies on those planets that have been listed. Its well-tested abilities have been proved invaluable on the planet, Pandora. The Na'vi name for it roughly translates to "shield that walks" or "not-demon walking". Glass thickness varies.

I showcase all of the AMP Suit's weapons. 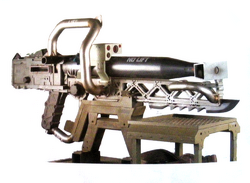 The GAU-90 is a massive 30mm hip-fired autocannon. It can fire up to 250 high explosive, armor piercing, and/or incendiary rounds per minute. It is required to have both hands on the weapon because of its savage recoil. It is primarily designed to be an anti-vehicle-anti-armor weapon. It also has a bayonet attached to it. 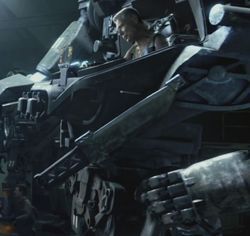 Used for clearing out underbrush, it is 1066 mm long and its weight is 34 kilos.

The creation of the tiger I heavy tank began in 1937, the tank was designed by the hencshel company, led by Erwin Aders. Production was handled by Henschel and Weggman factories, which made 450 tanks from July 1942 to August 1943. The Tiger 1 entered servixe with havy tank battalions. The tanks were first used in the fall of 1942, on leningrad front, in the 502nd heavy tank battalion. in December 1942, in North Africa, Tiger 1's entered service with 501st battalion

Thr main role of the Tiger Tank was to eliminate enemy tanks at a far range, similar to behaving like a sniper tank, or a Tank Destroy. Well on the haand the tiger tank can excel at brawling with other tanks at the medium.

It's box-like shape gives the ablility to some angling tactics

turret tracers is second slowest on the heavy tank side of Germany.

Low maneuverability, susceptible to being outflanked by mor quicker adversaries

unsloped armor on all sides

The battle between Metal War Machines

The scientist walks up to the general with a gleam in his eye.

“That battle was a success!” he exclaims.

“Now, we need get the video to show those savages our creatures!” the general acknowledges.

“Wait, what was the battle?” a soldier asks.

“Pvt. Construal, it was the Allosaurus vs Thanator battle, now, back to you post!” the general replies bitterly.

“Yes sir!” he retorts with a salute and leaves.

“Now, the rest of you, send that video to Pandora!” the general hollers at the group of soldiers.

“How would we send the video if there is no technology to send it to?” a soldier asks.

“There’s some technology left over.”

“The one that Jake Sully left at Pandora.”

Minutes pass by until…

“Good, now, dismissed!” the general says and salutes, with a smile and leaves the room.

“What do you want to do now?” a soldier asks.

“I dunno.” the soldier next to him replies.

They talk to each other for an hour…

“So, what do you want to talk about now, Jeff?” a soldier asks.

“What do you think the best war vehicle of all-time is, Joe?” Jeff asks.

“I’m going to have disagree with ya’ on that one.” Jeff responds.

“Eeehhhh, I think the Tiger Tank is better.”

“Okay, do you think it could beat it in a fight?”

“Yeah, of course it makes sense, you’re just not keeping up.”

“I am keeping up; he turns to another soldier, wouldn’t the AMP Suit beat the Tiger Tank?”

“Yeah, it can.” the soldier replies with confidence.

The debate gets more and more heated as every soldier joins in and takes a side. This stopped when soldier decides to settle it.

“Alright, alright, stop! We can settle this.” a soldier named Kozak bellows.

“We have an actual battle between these two vehicles!”

“We don’t have a time travel machine!”

“But, we do have blue prints and there will be time to train for sides.”

“Well, that was convenient.” a soldier mumbles.

"What was that, Cpl?" Kozack asks.

"Nothing." The Cpl replies.

"That's what I thought. Now, we got to create the Tiger Tank, we'll have both the best veteran tank and AMP Suit crews to go up against one another."

There is silence in the room. It is minutes which felt like hours, before somebody said something.

“So, how are we not going to do that?” a different soldier inquires.

A minute passes by before someone says something…

“Well, it’s simple, just we create a cockpit for each team and they will have goggles that will give them the ability to control the vehicle they’re in.”

“Well, how are they going to control each part of the vehicle?”

“Robots will be created and the pilots will have these cords that will control every movement that the robot will do. That way, no one with get injured.”

The soldiers ask the engineers to help them build the tiger tank and they agree because the debate seems pretty interesting. The soldiers give them the blueprints and leave them to their work. They then, try to find both the best tank crew and best AMP Suit pilot; they succeed in finding both of them in a matter of hours. The group then, give the tank crew a couple of hours to get used to the controls and train. Once, those hours were up, they get the battle arena ready and turns on the ever-changing environment. The robots are also finished and the crews get hooked up to the wires that control them. They both then, get into the cockpits and the robots get put into the real cockpits of each vehicle. Once the robots are booted up, they move the vehicles into elevators which lead to the arena. The AMP Suit pilot takes a deep breath and waits for the doors to open, the tank captain does the same. The doors then opens and the vehicles move forward, what they see is a forest and they both slow down the speed of each vehicle and move with caution; they don’t know when they are going to meet one another.

There is a beeping on the radar and the pilot looks down.

“Movement. Must be the Tiger 1.” the Pilot thinks to himself, he then moves to flank it. He equips the High-Explosive rounds and creeps slowly.

He continues to flank while the Tiger is scanning the area by moving the turret back and forth to look for it’s opponent; nothing and they continue their search. They hear some thumping on their right and like a hurricane, the tank is hit with a such a force, that all of the pilots are knocked off of their seats and just keeps happening, the tank is shaking, to the AMP Suit pilot, the armor is shaking, to the pilots, it’s an earthquake from Hell itself. It also looks as if some holes were made  in the side of the tank. For a minute, it all stops, and silence.

One of the tank crew look through one of the holes and says “It’s on the right, shoot i- AAHHH! AHHH! AHHH! AHHH!” He is then burned alive, the other crew members try to stop it with a fire extinguishers provided, to stop the fire from reaching the engines but, fail to stop the crew member from succumbing to the flames.

“Get back in your seats, and let’s beat this thing! C’MON! MOVE IT!” the tank commander bellows.

As the commander ordered, they get back in their seats.

“Where is he now?” the commander asks.

“Don’t know, sir, we are looking now.” one of the crew responds.

“Oh my god.” a crew member expresses with shock.

“What is it?” the commander demands.

They hear bullets firing and and see dents in the armor, they all stop because of the fear of getting killed. They wait and then, they hear thumping getting louder and louder.

“Someone mount that MG-34!” the commander orders.

One of the soldiers moves over to the dead soldier and starts to fire at the knife in the AMP suit’s hands, it is knocked out with bullets riddled in it.

“Don’t stop until it’s down!” the commander orders fiercely.

They continue to fire at the suit; it responds with trying to get away from the gunfire, manoeuvring as best as it can but, gets hit with multiple bullets shot in the leg and arms. The AMP suit responds with gunfire of its own hitting the tank as well. Given that, it has better mobility, it jumps in front of itself a few feet, seeing an opportunity, it fires the Armor Piercing rounds into the side.

“Sir, we are loaded up and ready to go. Let’s blow this mofo to kingdom come!”

“C’mon!” the commander says just before the bullets are fired into the side, killing all of the crew but, somehow sparing the commander.

The AMP suit moves slowly to the tank.

The environment changes to a wheat field.

“I have to do this myself, don’t I?” the commander asks in pain, with his injured ribs he straps on a pack of grenades on a crew member and opens the hatch and throws out the body. He then, grabs another round and prepares to load it. The AMP Suit looks down at the body and jumps away to give enough time for the Tiger to turn the turret and prepare to shoot at the leg of the AMP Suit. Just as the AMP suit looks up, the leg is blown off. He then reloads the round and prepares to fire.

“Mahalo motherf-” the commander was about to say when a High-Explosive round enters the barrel of the tank and destroys the commander inside.

Both crews steps out of the sim and groan in pain. They all find which also, includes the soldiers who started this whole thing, the general and scientist clapping.

“Sir, why are you clapping?”

“I’m clapping because you guys did a battle that had nothing to do with the RDA and you did it without my permission, normally you’d all be court martialed for this but, I liked the result. So, I want to show you all something, no, every soldier something. Wait here and I will call every soldier here. Every  ”

A couple of minutes later, all of the soldiers, engineers, pilots, etc. join the group.

“Men, I would like to reveal something about this Facility. It’s not a RDA facility that you have been working at, we have been secretly working on things before we showed off the Thanator vs Allosaurus battle and now, this.” the general addresses.

“Well, the soldiers and pilots, had a debate and used the engineers to make a vehicle to battle our AMP Suit and that vehicle was the Tiger 1 or the “Tiger Tank”. I can hear you discussing about this and I’m hear to reveal our true business here. Our business is a gladiatorial type of battle creator, we are called Deadliest Warrior. We are one of the small businesses in a huge corporation. We are now owned by an American with a French name; the previous owner was killed by an unknown man. We also lied to you about how we got the Allo and Thanator, we already have them in cages, what you saw was all a scam, we have every character, creature, monster, superhero, you can think of, in a cage. Men, welcome to Deadliest Warrior, a place where your fictional battles come true!” The general addresses with a huge smile and with a gesture, the door opens to reveal all of the characters, locked in cages.

“When do we start?” Kozack asks.