Where is My Rhine: Tyler Durden vs. Belisarius

Move on, nothing to see here, people. Seriously, though, this new editing system is funky, give it till tomorrow. 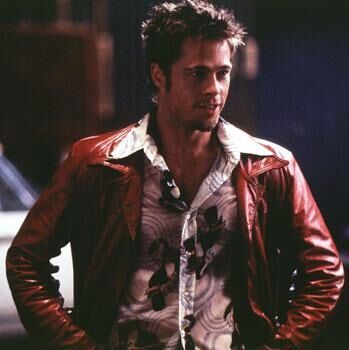 Tyler Durden is the split personality of the Narrator, the man who tells the story of the Fight Club. Tyler is a soap salesman who after going out for drinks with the Narrator and getting into a fight with him, decides to begin creating a club in which men can fight to relieve stress. However, Tyler begins to take control of the group and turn it into a terrorist cell against consumerism, believing this generation has sold itself out. His plans become deadlier and larger in scale until eventually, he plans to blow up several massive credit card buildings with nitro-glycerin bombs, wiping credit scores everywhere and sending the economy into anarchy. Ultimately, the Narrator takes advantage of Tyler just being a split personality and attempts suicide, blowing out his right cheek. Tyler, since what he is based on is dead, is killed and ceases to exist only for it to be revealed the Narrator survived. Regardless, the bombs go off before The Narrator can intervene, and Tyler is posthumously successful in his goals.

A typical American baseball bat measuring about several feet made of aluminum (or steel?). Combined with Tyler’s strength and his hatred for luxury vehicles, they make a deadly combination for property damage. Comes in a roughly two pounds with an intense amount of power behind the swing.

Tyler lacks any sort of professional training when it comes to his fighting style instead relying upon his raw strength and vicious beatdowns to give himself an edge over his competition. Although this may make him sound like an ordinary street brawler, he’s far stronger and more capable of the dozens of members in the club. As a result of his constant fights, he himself is more than capable of taking a hit and engaging in several fights against others before even taking a break. As well as using his raw strength to his advantage, Tyler is notably well equipped to use the surrounding environment to his advantage.

Nothing particularly special about this section other than Tyler wears clothing that is typical of the era and to up his cool guy appearance. A leather jacket, black t-shirt, and some pants, although there have been moments where he’ll take off the clothing in the Fight Club when facing his opponent. Really, this is just to serve as an area to compare his armor to that of Belisarius.

Flavius Belisarius (Greek: Φλάβιος Βελισάριος, c. 500[Note 1] – 565) was a military commander of the Byzantine Empire. He was instrumental in the reconquest of much of the Mediterranean territory belonging to the former Western Roman Empire, which had been lost less than a century prior.

One of the defining features of Belisarius' career was his success despite varying levels of available resources. His name is frequently given as one of the so-called "Last of the Romans".

He also won an important battle against the Persians at Dara but was defeated at Callinicum. He successfully repulsed a Hunnish incursion at Melantias. He was also known for military deception; he repulsed a Persian invasion by deceiving their commander and lifted the Siege of Ariminum without a fight. (Stolen from Wikipedia till I make something original)

The premier weapon for much of the early Eastern Roman Empire/Byzantine Empire, the Spatha measures several feet long, the blade typically being anywhere from 20-40in in length, along with a several inch long handle. The weapon was created from 6th century iron and was a double-edged straight sword in design prized for its long reach and mobility in the wars to come. As well as being used for slashing, the weapon was more than capable of running through enemies with the tip.

The 6th century military of the Eastern Roman Empire used a variety of shields to protect its soldiers from harm. The most consistent design being that of a circular or oval shaped shield made from wood with what appears to be a metal boss at the center to repel enemies along with offering another offensive option for the warrior. Combined with the Spatha, these two made an effective combo and allowed the Byzantine military to overwhelm and hold the line against their numerous enemies.

Byzantine Armor Much of the Byzantine military during the reign of Justinian adopted various armors from the Persians and made them their own. Steel helms and coats of mail became standard issue, protection for the legs was also commonplace to ensure that the soldiers of the Empire were protected in all forms of combat alongside their shields.

Belisarius had a long and colorful career over the course of decades, although this specific incarnation will be after the Byzantine Conquest of Rome, perhaps the height of his legendary status in the Empire. Up to this point, Belisarius had successfully fought in several wars and alongside his men. Fighting Persians, Goths (no, not those kind), Arabs and his fellow countrymen during the Nika Revolt. Even fighting on the frontlines when conquering Rome and capturing it for the Byzantines, successfully ensuring a temporary vestige of hope for the restoration of the Roman Empire. These wars took place over the course of years and as a result he has much experience against a variety of opponents to draw upon and the combat skill to back it up. It should be noted that, Belisarius himself often refused to commit to one-on-one duels, typically preferring to send out a champion in his stead.

Tyler Durden comparatively has a much shorter career as a warrior, only being what we can assume to be several months. During this brief window of his existence, Tyler regularly engages in fistfights with members of his cult, Project Mayhem, along with the typically expected vandalism of an anarchist. It should be noted however that he does these actions on a daily basis and as a result of these actions, has grown accustomed to the regularly dished out violence and mayhem that he brings to the table.

There’s a distinct lack of information on how physically fit Belisarius was, as the writers of the past failed to anticipate the internet and how people would evolve the concept of my Dad can beat up your Dad. Still, based on the present information that we can find, one can assume that Belisarius underwent the regular drilling and followed the doctrine of training that was expected of the Byzantine military at this time which still replicated much of the Western Roman Empire due to the window between its collapse and the arrival of Belisarius into the military. Considering his ability to fight on the frontlines during the Siege of Rome and helping to take the city, it can be assumed that Belisarius was fit in his condition and based on how he disciplined his soldiers was an example to them all. (Might remove this or try to provide more information)

Tyler Durden is played by 1990s Brad Pitt, the most masculine and powerful of all the Brad Pitts. Based on the shirtless scenes in the movie, we can assume that Tyler follows a strict doctrine of training and physical fitness. His abs are not just for show as well, due to his regular fights in the club where he seems to be undefeated and overwhelming smashes his opponents once he manages to get past their own offense. It should be noted at least in the earlier portions of the film before the cult is truly drilled that most of these men are just office workers or just regular people looking for a way to act out their aggressions through violence and find meaning in their otherwise empty monotonous lives. Still, the fact that he does this on a regular basis and shrugs off his injuries is nothing to scoff at.

Both men were exceptionally brutal in regard to how they acted, but in the chance of Belisarius it was only when absolutely needed to ensure the peace of his Patron and his Realm, notably during the Nika Riots. Following the narrow escape of Justinian and a stern talking from his wife, the Emperor ordered his greatest General to put down the rebellion in the city. Belisarius had his men stationed at the exits of the hippodrome and proceeded to methodically slaughter every single of the rioters located in the structure before turning his attention to the rest of the city resulting in 30,000 men and women. Although as mentioned this is only in situations where he was directly ordered to take part in crushing the resolve of enemies to his Patron’s throne, otherwise he was known to be fair and kind handed in his dealings unless absolutely necessary.

Tyler Durden to say the least is an exceptionally brutal man that believes in his cause with fanatical devotion and as a result is able to make himself and his soldiers into sworn brothers in his cause. He is able to convince himself and others through acts of violence, vandalism and terrorism that they can achieve a revolution and he has no issue in beating down any sort of dissent within his ranks. During the course of the film, he destroys the livelihoods of various individuals, radicalizes salarymen and leaves men bloodied and brutalized much to his own personal satisfaction and enjoyment. Although weirdly enough since I’m using the film version, Tyler never actually kills anyone.