Mercenaries... Bounty Hunters... Hitmen... . All terms to describe the not so noble profession of murder for hire. These type of men/women will do almost anything to get some dough in their pockets. Steal, lie, betray "allies", and obviously kill others. So today for my introduction to the Skulduggery Pleasant world, we're using two similar killers for hire.

Hol Horse, the gunslinging mercenary who always comes in 2nd with his trusty Stand, Emperor

J. Geil, the double right handed sexual assaulter who uses the power of mirrors with his Stand, Hanged Man

Dusk, the vengeful,sadistic, and cruel vampire who will track and kill anyone who dares to cross him 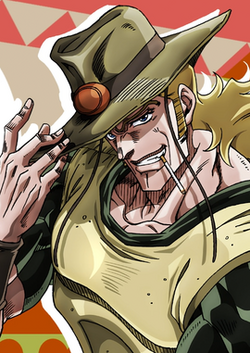 Hol Horse is a mercenary working for DIO. He first appears in Calcutta, working with J. Geil. They decide to go after Jean Pierre Polnareff after he was separated from the Joestar group, and almost kills Avdol when the latter comes to help his teammate. The group then goes to search for J. Geil, who has more of a connection with their pasts and defeats him. Hol Horse attempts to confront them after his death, but upon learning that his partner died he flees. Angered at Hol Horse's cowardliness and the fact that he let J. Geil die, Enya the Hag, J. Geil's mother, wounded and began to control him through her mist based Stand, Justice. While acting dead Hol Horse steals the Joestar Group's vehicle and once again escapes the Stand users.

Later, while reporting to DIO on Alessi's and Mariah's defeat, he tries to attack the vampire when questioned on why he is not fighting the Joestar group. He is cowed by DIO's power and, broken, swears eternal loyalty to DIO and decides to attack the Joestar group with a new partner. Shortly after, he kidnaps Boingo, the younger half of the Oingo Boingo brothers, to make a final attempt on the Joestar group's lives. He does not fill the predictions set forth by Biongo's Stand Tohth correctly and gets shot in the face with his own bullet. His wounds put him in a coma, an embarrassing end to his run. 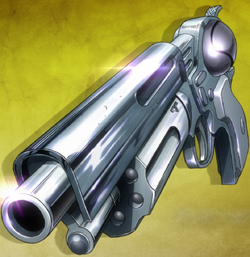 Hol Horse's stand takes on the form of a revolver. Emperor fires bullets like a normal gun but Hol Horse is able to freely control the trajectory of his bullets. This enables him to bend his bullets around corners, do a U turn if he misses his target, navigate them through a metal pipe without being able to physically see them and all with enough precision to avoid even incredibly fast stands such as Silver Chariot with no lag time. Hol Horse summons Emperor directly into his hands which makes it perfect for a quick or stealthy attack and he has an infinite number bullets. Emperor works in conjunction with Hanged Man by shattering windows or mirrors in order to give it more angles to attack from.

But Hol Horse is not without a friend, as is his nature... 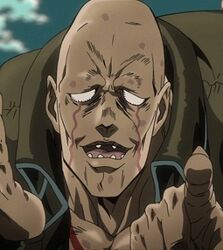 J. Geil is a minor antagonist of part three of JoJo's Bizzare Adventure, Stardust Crusaders, and is one of the many stand users sent by DIO to hunt down the Joestar Group who was enlisted through his affiliation with his mother, Enya the Hag.

He was a perverted serial sexual assaulter, and had previously attacked Jean Pierre Polnareff's sister among many other women, banking on his possession of two right hands to make testimonies sound ridiculous. However, the lack of justice for Sherry's murder sent Polnareff on a nearly lifelong mission to locate his sister's murderer.

During the events of part three, Geil is a minor antagonist and partner of the mercenary Hol Horse, possessing a stand that lives in reflections, and can attack and murder his enemies by harming their mirror-selves. While this initially posed an almost unbeatable combination for the Crusaders to defeat, even managing to seemingly kill Muhammed Avdol, he was killed after Polnareff, with the aid of Noriaki Kakyoin, found the secret to his stand and attacked it while it was moving from one mirror to another. Running away in terror, J. Geil fell and accidentally hung himself upside down on a gate, dead. 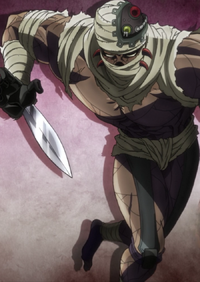 Hanged Man is J. Geil's Stand which resides within reflective surfaces. Rather than attacking a person directly, Hanged Man appears in reflective surfaces such as mirrors, windows, puddles of water and even the pupils of someone's eye. It then attacks it's victims reflections through the use of two wrist blades which are sharp enough to cut through flesh with ease and they will bear the wounds of this attack. Hanged Man can travel between reflective surfaces at the speed of light which makes it incredibly hard to actually damage. However it can only move between reflective objects in a linear faction and has to move it's location if it's current surface is covered or destroyed meaning it can be forced into following a particular path. 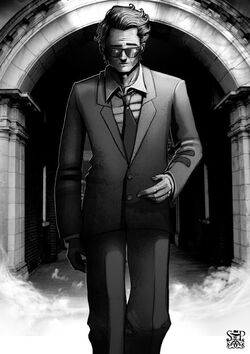 Billy-Ray Sanguine is a hit-man, he considers himself a hit man deluxe, who kills people for fun as well as for money. According to himself, Sanguine used to be a detective, giving up soon after as he kept killing his clients due to boredom. He also states that he has only solved one case, but considers it 'cheating', since he was the

Sanguine has very laid back, witty personality. Most of the time he is relatively polite to people when talking to them, though this mainly only to female characters. There are also some that warrant nicknames from Sanguine, such is the case of Skulduggery Pleasant whom Sanguine calls 'Mr. Funnybones' or sometimes just "Bones". He wears a brown suit and scuffed cowboy boots and also a pair of sunglasses to hide his eyes which are empty sockets; despite his lack of eyes he can in fact see better than people with eyes. He also has a tendency to hold vendettas against people, such as Valkyrie after she stole his beloved straight razor on two separate occasions and when she cut him with Tanith's sword, causing him to become unable to use his magic effectively.

But even the hitman deluxe needs allies... 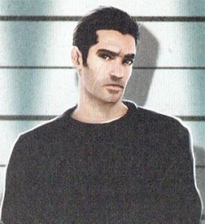 Dusk is an enigmatic and powerful Vampire. Loyalty is not one of his strong points, as Vengeous was not surprised when he did not attempt to free him from prison, thus he does not take it upon himself to punish Dusk. Like all vampires, Dusk is eerily elegant and graceful. Valkyrie Cain describes him as "beautiful but inhuman." He possesses immense physical strength, superhuman agility and speed. He curbs his Vampire nature through the use of a syringe containing a chemical mixture of hemlock and wolfsbane. He has a history of holding vendettas and never stops until he spills blood.

Hol Horse and J Geil are both experienced mercenaries who have likely had decades with their Stands, mastering their usage through their jobs. They acquired their Stands at an early age, so it's not a stretch to assume they've had a lot of time using them.

However, Billy Ray and Dusk are hundreds of years old. This means they in general have had more time fighting. Dusk has hunted many people in his time, and has fought many a sorcerer, while also taking those down whom he has/had a grudge with. Billy Ray used to be a detective, but became a well known hitman, who has also killed many people, and has shown his worth against sorcerers.

None of these men are particualrly well trained, and are mostly self taught. As these guys aren't main characters, we don't get much info on them, and none of them are soldiers or parts of any militant groups they aren't paid to be in, so there's not much to their training. The only thing that could be really interpreted as such is Billy Ray's supposed time as a detective, which would likely involve some type of police training.

As long as Hol Horse has a partner, he is A OK. Having J Geil with him, gives him confidence (sometimes overconfidence) in attacking an enemy, and gives him someone to focus him in battle. But the moment he realizes his partner's gone, the Entire Equine will immediately begin to retreat, hoofing it out of there. J Geil's personality really isn't explored much, but I would make the assumption that he's decently calm while fighting, especially considering how his Stand works. If that's overcome however, he will begin to retreat just like Hol Horse.

Billy Ray is almost always laid back and chill, as befitting of a Southerner hitman deluxe. He's able to keep his cool in battle the majority of the time, and is able to almost any job with a cool attitude as long as he's paid properly. Though he is prone to anger if his knife is lost or he is severely injured. Dusk is often fueled by his need to exact revenge upon those who have wronged him. His obsession with this often drives him to rage, and makes him fixate on the aforementioned people who have wronged him.

I feel it necessary to group Billy Ray/Hol Horse and Dusk/J Geil together, because they're rather simillar. The first group are two mercenaries who aren't esepcially cruel or brutal, they're mostly interested in completeing the job so they can get paid. Both Dusk and J Geil however are remorseless, sadistic killers, who love to kill, and torture their opponents.

These four are mostly bound by circumstance and the promise of cold hard cash. There's no real incentive to care for the other for either of them. If things go south for either group, I wouldn't expect them to go out of their way to help the other. An exception of course is if it directly affects them.

This battle takes place inside of a hotel in Calcutta

Both pairs are targeting the same person, and are aware of the other, but not of their powers/abilities.

Billy Ray and Dusk will be able to see Emperor and Hanged man given their magical characteristics.

I hold the final say as to whether a vote counts or not, guidelines not withstanding.Voting will end when I am satisfied the the quality and quantity of votes.