I will most likely embark upon a slew of fictional battles soon, but before that I wanted to return to my historical roots and right a wrong from the 2012 era of DF. A time where there was disorganization galore, lack of information, and just bad argumentation in general. So without further ado, I shall give two misrepresented commanders another shot at each other.

Pancho Villa, the caudillo turned revolutionary who took the fight to the wealthy establishment

Mikhail Tukhachevsky, the Soviet general who developed the theory of Deep Operation 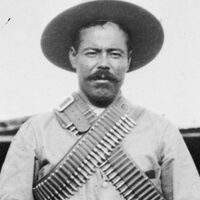 José Doroteo Arango Arámbula (5 June 1878 – 20 July 1923) – better known by his pseudonym Francisco Villa or its hypocorism Pancho Villa – was one of the most prominent Mexican Revolutionary generals. As commander of the División del Norte (Division of the North), he was the veritable caudillo of the Northern Mexican state of Chihuahua which, given its size, mineral wealth, and proximity to the United States of America, provided him with extensive resources. Villa was also provisional Governor of Chihuahua in 1913 and 1914. Although he was prevented from being accepted into the "panteón" of national heroes until some 20 years after his death, today his memory is honored by Mexicans, U.S. citizens, and many people around the world. In addition, numerous streets and neighborhoods in Mexico are named in his honor. Villa and his supporters seized hacienda land for distribution to peasants and soldiers. He robbed and commandeered trains, and, like the other revolutionary generals, printed fiat money to pay for his cause. Villa's men and supporters became known as Villistas during the revolution from 1910 to roughly 1920. Villa's dominance in northern Mexico was broken in 1915 through a series of defeats he suffered at Celaya and Agua Prieta at the hands of Álvaro Obregón and Plutarco Elías Calles. After Villa's famous raid on Columbus in 1916, US Army General John J. Pershing tried unsuccessfully to capture Villa in a nine-month pursuit that ended when Pershing was called back as the United States entry into World War I was assured. Villa retired in 1920 and was given a large estate which he turned into a "military colony" for his former soldiers. In 1923, he decided to re-involve himself in Mexican politics and as a result was assassinated, most likely on the orders of Obregón.

A machete is a broad blade used either as an implement like an axe, or in combat like a short sword.

The Colt Bisley is a variant of the legendary Colt Single Action Army revolver. The weapon was modified to be ideal for target shooting, with adjustable sights, and a wider trigger and hammer. The weapon was named for a famous shooting range in England. The weapon found another use in the American West, as a self-defense weapon, as wide trigger and hammer were useful for fast shooting. Villa's Bisley will be chambered for .44-40 rounds. Like all Colt Single Action Army revolvers, the weapon had a six-round cylinder.

The Mauser Model 1910 was based on the Mauser Model 1902 which was a Mauser bolt-action rifle, designed for Mexico. It was similar to the Mauser Model 1895 but used the Gewehr 98 action. It was created to lift the dependency of the locals to foreign suppliers. Like most other Mauser model rifle it has a 5 round stripper clip magazine chambered in the 7x57mm Mauser round.

The Mondragón Rifle is a Mexican battle rifle that holds the distinction of being the world's first automatic rifle, and the first fully automatic firearm that could be operated by a single man. The weapon was first deployed by the Mexican Army in 1887. The rifle was fed by an 8 or 20-round magazine (20 for the purposes of this match), and fired at a rate of fire of 750-1400 rpm (750 for the purposed of this match). The weapon fired a 7.5mm Mauser round at a range of up to 550 meters. The weapon was accurate in semi-automatic fire, but less so in full auto, proving effective only at closer ranges and for suppressive fire. The weapon could resist sand and dirt well, but would malfunction with moisture. 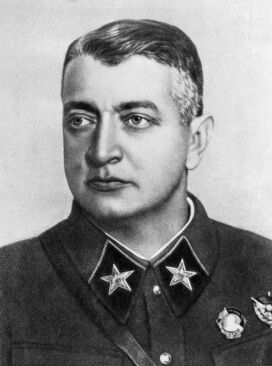 Mikhail Tukhachevesky was born into a family of a Russian nobles in 1893. In 1912, at age 19, the entered the Moscow Military School and graduated a second lieutenant in 1914, just in time to be sent to the Eastern Front of World War I. Tukhachevsky was captured by the Germans, attempting to escape four times before finally succeeding on his fifth attempt.

Tukhachevsky was later commanded Soviet Forces in the Polish-Soviet War in 1919. The Soviets met defeat at the Battle of Warsaw in 1920, and first came into conflict with Josef Stalin. Tukhachevsky and Stalin each blamed each other for the Soviet defeat.

Tukhachevsky would go on to play a leading role in the reformation of the Red Army starting in 1931, and at about the same time, wrote several books on modern warfare, noting the importance of tanks and aircraft. Tukhachevsky came up the the tactic of deep operations, the tactic of using fast strike, penetrating deep into enemy lines. In 1935, he was made a Marshall of the Soviet Union.

Tukhachevsky was viewed by Josef Stalin as a major rival, and this rivalry with Stalin brought about his downfall. Realizing the Tukhachevsky and the Soviet military were the only thing standing between him and absolute power, Stalin had Tukhachevsky demoted to merely the commander of the Army of the Volga, possibly to separate him from his men. Stalin then ordered Tukhachevsky and seven other senior army officers arrested. They were convicted of treason in a show trial, and, in 1937, Tukhachevsky was executed by a gunshot the back of the head mere hours after his conviction. 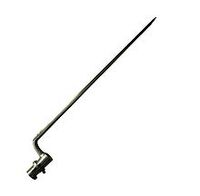 A spike bayonet, also known as a pigsticker in informal contexts, is a blade attachment for a firearm taking the form of a pointed spike rather than a knife.

The Nagant M1895 Revolver was a seven-shot, gas-seal revolver designed and produced by Belgian industrialist Léon Nagant for the Russian Empire.

The Nagant M1895 was chambered for a proprietary cartridge, 7.62×38mmR, and featured an unusual "gas-seal" system, in which the cylinder moved forward when the gun was cocked, to close the gap between the cylinder and the barrel, providing a boost to the muzzle velocity of the fired projectile and allowing the weapon to be suppressed (an unusual ability for a revolver)

The Mosin–Nagant is a bolt-action, internal magazine-fed, military rifle invented under the government commission by Russian and Belgian inventors, and used by the armed forces of the Russian Empire, the Soviet Union and various other nations. It is one of the longest serving bolt action rifles in history, being issued until the 1940s (and up to the 1960s in third world client nations of the USSR). It fired a 7.62 x 54 round with a five round magazine.

The Federov Avtomat was an early Russian automatic rifle first designed in 1915. The weapon fired a 6.5mm Arisaka round- a design originally designed for the Japanese Arisaka rifle, as the 7.62 Nagant produced too much recoil for effective full auto fire. The weapon had a 25-round magazine with a rate of fire of 300-450 rounds per minute.

Tukhachevsky joined WW1 in July 1914, serving until 1915 when he was captured by German soldiers. He then escaped after 5 attempts, and joined the Bolsheviks in 1917. He quickly became an officer due to his skill and was in command of two seperate armies, through Siberia, Crimea, and then assigned in the second to put down multiple rebellions/uprisings. He then finally was in charge of the Western Front in the Polish-Soviet War, until he was eventually defeated by Jozef Pilsudski (LB's boi).

Villa was originally in a bandit band, acting as a common criminal, until he was forcibly conscripted into the Federal Army after his capture. After he deserted, he eventually became a major leader within the ten year Mexican Revolution. He led through several battles such as the Battles of Zacatecas and Ciaduad Juarez. And he also fought multiple battles against the United States Army.

Tukhachevsky was the son of impoverished nobles, but yet he was still able to attend multiple military schools between 1912 and 1914. There isn't detailed information on any other training he received, but being an officer and then Marshal in the Red Army means, he likely recieved standard officer training of the time.

Like Tukhachevsky, it's difficult to get the specifics of Villa's training. We do know however that he was forcibly inducted into the Mexican Federal Army, and given their standard training. He also likely recieved training from the Constitutionalist Army formed during the Mexican Revolution.

Tukhachevsky is, as will be discussed further in the Brutality section, a highly aggressive commander with a hig amount of initiative. But beyond that he was also a theoretician, who was able to develop the theory of deep operation. Deep operation is essentially a doctrine which emphasizes disrupting/destroying an enemy force not only at the point of contact, but throughout the depth of the battlefield.

Villa preferred to use horses in conjunction with his infantrymen, giving them all their own horse to increase mobility. He also used them to directly charge into the enemy, striking them hard and fast with a mass cavalry charge. Thiugh this was notably ineffective against standard WW1 defensive tactics (barbed wire, trenches, machine gunsx etc.).

Tulhachevsky was a man who as described in the Tactics section, was a very aggresive commander. He was also known to be ruthless, particularly in relation to putting down uprisings. He was perfectly willing to execute peasants, and hit them with poison gas to defeat them. He also had an above average amount of initiative, to the point where his supply lines were disrupted, and his reinforcements left behind.

Villa is bandit turned caudillo, and has shown no trouble with killing, and taking the land of his enemies.It's what he had to do to both survive and what he's done to lead his faction of the revolution. But he never showed any overt excessive cruelty, and the closest thing to it is him tracking down his sister's rapist and killing him.

This X-factor easily goes in Pancho Villa's favor. The guy was able to take a Federal army dude's rather large hacienda, and then used it to help him take the town of San Andres. I can't find anything that could even remotely put Tukhachevsky on that level with train usage.

Battle will be 100 Soviet soldiers v 100 Villistas plus Tukhachevsky and Villa respectively on a neutral,flat landscape in Mexico.

Tukhachevsky is sent to Mexico to ally with Pancho Villa's revolution and therefore boost the strength of revolutions across the world. But when he gets there, Villa has no intention of working with the Soviets and through this eventually a fight breaks out.

Villa and his men will have access to horses, and Tukachevsky will start on the defensive.

The deaths of everyone on one side is not necessary to victory. If one side routs or surrenders, the other side will be victorious.

I hold the final say as to whether a vote counts or not, guidelines not withstanding.Voting will end when I am satisfied the the quality and quantity of votes.