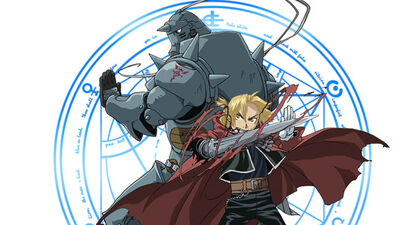 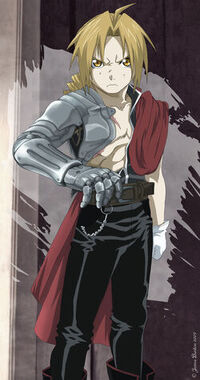 Edward Elric also known as Ed or the Fullmetal Alchemist , is the titular protagonist of the Fullmetal Alchemist series. After losing his right arm and left leg due to a failed Human Transmutation attempt, Ed became the youngest State Alchemist in history by achieving his certification at age twelve. Three years later, Ed has become fully engrossed in his search for the legendary Philosopher's Stone, an item with which he hopes to restore his younger brother Alphonse Elric, whose whole body had been lost in the aftermath of the human transmutation. 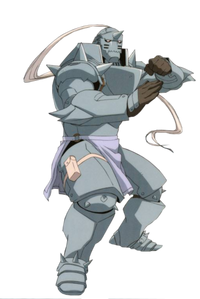 Alphonse Elric, also known as Al, is the deuteragonist of the Fullmetal Alchemist series. He is the younger brother of the Fullmetal Alchemist Edward Elric. Al is also a victim of the failed Human Transmutation experiment in which Ed lost his right arm and left leg. Having had his entire physical being taken away from him in the aftermath of the tragedy, Alphonse exists solely as a soul alchemically bound to a large suit of steel armor. Now, Al travels with his brother in search of a legendary Philosopher's Stone, an item with the power to restore their bodies to normal.

Alchemy is, as it is understood in the Fullmetal Alchemist series, the ancient metaphysical science/mystical art of manipulating and altering matter by using natural energy. This act is known as "Transmutation" and its sequence is usually described as:

1. Comprehension - Understanding the inherent structure and properties of the atomic or molecular makeup of a particular material to be transmuted, including the flow and balance of potential and kinetic energy within.

2. Deconstruction - Using energy to break down the physical structure of the identified material into a more malleable state so as to be easily reshaped into a new form.

3. Reconstruction - Continuing the flow of energy so as to reform the material into a new shape.

Alchemists also must follow what is known as the Law of Equivalent Exchange. Essentially, in order to transmute something, something of equal value must be given up. Alchemists also only make objects/materials made of a particular substance or element can only be transmuted into another object with the same basic makeup and properties of those initial materials. In essence, Alphonse and Edward turn stone to water, or make massive pillars without a large amount of material available.

Also alchemists usually require a special Transmutation circle to perform, but by this point in the series, both of the brothers do not require these circles However, they are still required to physically touch the material they wish to use in order to utilize alchemy. 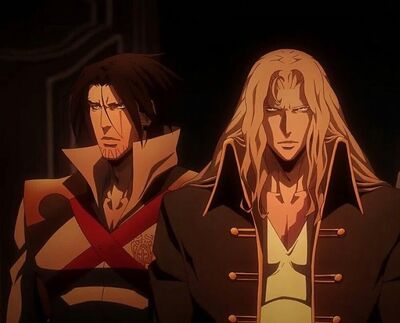 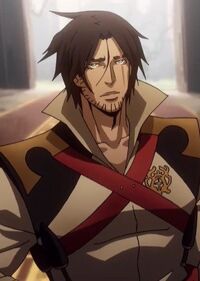 Trevor Belmont is the last remaining Belmont, the rest of his family having been driven to exile by the Church. He, a shambling drunk, eventually stumbles into the city of Gresit as it is under siege by Dracula's forces. There, he has a chance encounter with a wandering tribe known as the Speakers, who sought to provide aid and succor to those trapped within the city. He takes a request from their elder to rescue Sypha Belnades, in exchange for them leaving the town for their safety. He succeeds, and he and Sypha reluctantly work together to defend the city.

The town safe, the pair then found a coffin deep under the city, the source of the "Sleeping Soldier" myth. The coffin contained Alucard, Dracula's son, who joined them on their new quest to kill his father. The trio then journeyed to the ruined Belmont estate, seeking a way to anchor Dracula's moving castle. They succeed, and Trevor holds off an attack by Dracula's forces while Alucard and Sypha finish the spell to do so. Once it is finished, the trio then enters the castle to fight Dracula and his commanders. They emerge wounded but victorious, and Trevor sets out with Sypha to hunt down the remnants of Dracula's forces.

While traveling with Sypha, the couple fight several groups of demons and eventually come upon the town of Lindenfield, where they stay for a few days. During this time, they get roped in by the Judge and Saint-Germaine to investigate a priory of insane monks. The leader of the monks, Sala, was communicating with a Night Creature in preparation to sacrifice the entire town to open the Infinite Corridor. While the monks succeed in doing so, with the sacrifice of the entire town of Lindenfield, Saint-Germaine manages to redirect and close the portal, while the invading Night Creatures are killed by Trevor and Sypha. 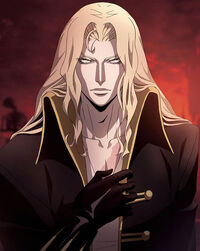 Alucard is the son of the infamous vampire Dracula and his human wife Lisa Tepes. While he was away, Lisa was killed by several priests who had accused her of witchcraft. A year after this occurred Dracula sought revenge, slaughtering the humans who had killed his beloved and planning a human genocide. Alucard tried to stop his father, believing that the loss of innocent life wasn't worth vengeance, but was seriously wounded and retreated. He laid himself in a coffin beneath the town of Gresit to recover his strength.

A year later, Alucard was awoken by Trevor Belmont and Sypha Belnades, who were seeking the fabled "sleeping soldier" who could help them slay Dracula. Initially hostile, Alucard agreed to help the duo and confront his father. The trio venture to Castle Belmont, where Sypha uses an ancient spell to bring Dracula's castle to them. Alucard, Trevor, and Sypha fight through several of Dracula's minions before finding him. The three struggle to defeat him until Alucard appeals to his mother's memory, convincing Dracula he would rather die and staking him. With no purpose left, Alucard decides to stay at the castle to guard and learn its many magical secrets.

At a young age, the Elric Brothers went under the tutelage of Izumi Curtis , a master alchemist and talented martial artist. The first part of their training was to leave them on an island with nothing but a knife for an entire month and learn the meaning behind the phrase " One is All, All is One". After they both suceeded in this task, they then went on to study under her for another six months, learning both alchemy and martial arts skils.

Alucard has magical and martial training from his father, along with being provided much knowledge form all parts of recorded history. Trevor on the other hand has been mostly self-taught as a result of his family's excommunication. This however doesn't seem to impede him in most situations, as the skills he taught himself allowed him to survive for many years.

It isn't clear how much experience Ed and Al have before the story begins, however they've gone against a variety of opponents. They've faced a horde of mindless zombies, other strong alchemists with their own specializations, superhuman chimeras,two beings similar to Alphonse, and powerful homonculi with potent healing factors.

Like the Elric brothers, we don't get a definite read on how much experience Trevor really has. But it's clear that he's had more action before his series.Considering the fact that he's basically been forced to live on his own for years on end, it's not a stretch to say he had to fight and scrounge for what he needs, especially with the mistrust of the Belmont family. As for Alucard, since his only actual fight before the events of the series was one with his father, which he lost and then stayed in a coffin for about a year. Both of these two have fought a variety of monsters, demons and vampires in their time together, even if it was relatively short.

The Elric brothers are very much opposed to taking a life the vast majority of the time, even when they're fighting against people they detest. This includes sparing the life of a man who made a chimera creature mixed with his daughter and their dog, and another person who bragged about their direct causation of a major civil war/genocide . However, this won't stop them from injuring opponents enough to beat them, acheive victory etc.

Trevor and Alucard on the other hand while not bloodthirsty monsters, are much more willing to kill. They show no qualms with killing all sorts of demons, vampires, human etc. They don't show nearly as much mercy for evildoers, even if it's Dracula, who is Alucard's father. This does cause Alucard considerable distress and pain to carry out, however he was still willing to carry it out to save the world.

Edward and Alphonse are generally intelligent and creative, showing their very high aptitude in alchemy in a variety of ways. They've also been shown to be particularly skilled in combat, working through their own weaknesses and enemies' strengths to win. But there are some issues with Edward himself that sometimes throw this out the window. He's quite quick-tempered and impatient at times, and absolutely loathes being called short or someone even alluding to it. Even when he's composed, it's caused him to lash out in a violent manner both physically and verbally.

Trevor has shown he's both a competent fighter, and a superb tactician who can improvise. He was able to cobble up an effective fighting force out of a bunch of random villagers, and an inexperienced Sypha with limted time and resources . As mentioned in training, Alucard is quite the scholarly being, having detailed knowledge from his parent's library on medicine, magic, and many other subjects.

Alphonse and Edward as brothers are incredibly close, they train together, fight together, and are work together frequently. They use their alchemy in tandem with each other. However, Edward's more headstrong and impulsive personality does tend to get in the way sometimes. Like the time he attempted to go toe to toe with a serial killer with powerful alchemy that Ed had no knowledge of.

Alucard and Trevor initally were enemies, especially since the Belmonts and vampires have been bitter enemies for generations. This carries on through a lot of their interactions even as a team. But through their time together, they clearly respected each other, even if they didn't admit it. And their antagonistic relationship turned into more of tough brotherly love, the type that involves them constantly giving each other shit for entertainment.

This battle will take place in Gresit, Wallachia. Ed and Al have been tracking Trevor and Alucard for a week and eventually find them there.

Trevor and Alucard are aware and are preparing for their arrival, but are not aware of their powers.

This battle can be won through Sissy KO, as kiling both opponents will be quite difficult for both sides.

The Elric brothers will not have access to a Philosopher's Stone, and Edward will not be outfitted with Northern Automail

Timeframe: Trevor and Alucard: During Season 4

Edward And Alphonse: Right before the limit on alchemy is lifted

I hold the final say as to whether a vote counts or not, guidelines not withstanding. Voting will end when I am satisfied the the quality and quantity of votes.