Today, two legendary hitmen enter the ring. Deadshot: The DC Universe's top marksman and assassin. VERSUS. Agent 47: The genetically enhanced clone hitman. Two warriors will enter the ring, blood will be shed, bullets will blaze; One will emerge victorious leaving the bloodied corpse of his foe in the ring. The lone victor will be crowned....THE DEADLIEST WARRIOR!

Mr. 47 is a genetically-enhanced clone, the culmination of decades of secret research into gene augmentation. His creation was funded by a cabal of criminal masterminds who donated their own DNA to the project.

In the 1950s, five men of various nationalities served in the same unit of the French Foreign Legion - Otto Ort-Meyer, Lee Hong, Pablo Ochoa, Franz Fuchs and Arkadij Jegorov. After their stint was finished, Ort-Meyer ran a mental institution in Romania as a cover for genetic experiments, while the other four all became major crime lords, terrorists or both.

Ort-Meyer's goal was to create "perfect" soldiers, in that they were as physically fit as possible and obeyed orders with intelligence yet loyalty. Ort-Meyer tried to make his discoveries public before 47 was created, but was discredited as a scientist because his radical theories were deemed insane by his peers.

Merely coincidental to his name, he has a 47th chromosome that gives him above-average fitness and intelligence. In real life, possessing an extra chromosome can lead to problems such as infertility, Downs syndrome and premature death. However artificial chromosomes are currently being pursued as a method of inserting new genetic material into genetically modified organisms.

As a child, Lawton idolized his brother. His mother convinced his brother to kill their father. His brother locked Floyd outside, but Floyd, wishing to save his brother from a grim future, took a rifle to shoot the gun out of his brother's hand. He was sitting in the tree branch when it broke and Floyd accidentally shot his brother in the head. Lawton inadvertently kills the brother he loves to save the father he hated.

Deadshot is a hired assassin, regularly boasting to "never miss." He is capable of using a large variety of weapons, but prefers using a pair of silenced, wrist-mounted guns. He initially appeared in Gotham City as a new crimefighter, but was revealed to be an enemy of Batman when he attempted to replace the Dark Knight. When this plan failed, he attempted to become king of Gotham's Underworld. Batman and Commissioner Gordon publicly exposed his plot, and he went to jail.

After serving his jail time, he went out in the world and hired out services as an assassin and joined the Suicide Squad. He strived to die in a spectacular way, the main reason he joined the Squad. He feels he has no reason to continue living, and, while he does not want to commit suicide, he simply does not care if he dies. Various reasons have been cited for this, but the most common thread in them is his parents' peculiar hatred for one another, so much so that Lawton's mother tried to hire both her sons to kill their father. During a hiatus from the Squad, his son was murdered by a pedophile, upon whom Deadshot later took revenge. Western DeadshotDeadshot's death wish has been curtailed somewhat in recent years by the discovery that he has a daughter, Zoe, who lives with her mother in Star City. His personality has also been influenced by his involvement with the mercenary group known as the Secret Six. Founded in protest of the massive villain group known as the Society, the Secret Six were originally gathered by Lex Luthor (under the alias of Mockingbird). Since then, they have gone into business for themselves. Deadshot has formed a reluctant bond with his fellow members of the Six, particularly Catman (who he shares a friendly rivalry with) and the banshee Jeannette (with whom he has been romantically involved). Deadshot is still primarily out for himself however and is not above betraying his teammates if it suits him. 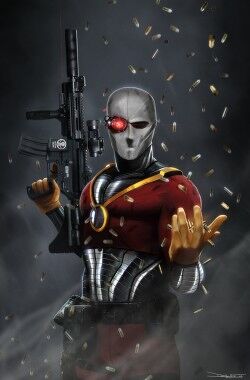 Same weapon, same function. But with the extra addition of the Garrote to Agent 47's lineup, it gives him the edge.

The AMT and M1911 are essentially the same weapon. The AMT Hardballers however have greater range.

The AKS-74U may be a smaller rifle and have a larger caliber, however; The M4 is far more accurate and grabs rate of fire. This means the rifle can him from a range and put greater volume down range and hit the target. With the additions of Deadshot's modifications to the rifle, it clinches the win for Deadshot.

While Agent 47 is surely a brilliant marksman, he's no Deadshot. The WA 2000 has been known to be slightly more accurate and has the advantage of capacity, range and rate of fire. BUT, Deadshot's superior marksmanship bring them up to the same level.

The Crossbow is arguably more accurate, but again, we see Deadshot's marksmanship bring the wrist guns past the level of the Crossbow. The wrist rifles are also far more concealable, faster firing and have an arguably more damaging.

The fight will be in the Boston Harbor shipping yard

Voting must include weapons edges or a detailed paragraph.

"Funny thing about fate, you can't out run it. My cloned friend here will learn this in a rather tragic way. Fate lines up diferently for different people. Like Johnny Wilbur's grandmonther, who spoiled him rotten. The fatass was later employed to help build the Saint Marie barge. The largest barge ever built. When our firend Johnny was working on the main bridge window, he dropped the final screw that secrued the window in place. He dropped that last screw bahind a control unit. But chubby little Johnny's hand was too fat to reach that screw. Nobody ever noticed it for the three years it was active.

Like the woodpecker that incessintly pecked at the Boston Harbor shipping yard's main building wall. A crack emerged, and was never repaired.

Finally, we see Wilma Burdston's forgetuful mind to shut the vents on that same building that night, leving a clean and open air duct vent for someone to look through. Someone like me, to look through the crosshairs of his rifle, through that vent, into the next room over where the woodpecker's crack in the wall was just wide enough for a bullet. Then eight-hundred-and-fifty meters away lies the Saint Marie Barge. In the bridge of that barge, lay an unsuspecting Agent 47, just beyond the screw hole, a screw hole that was made three millimeters too big by a sleepy worker who happened to have a little too much to drink the night prior. A screw hole just wide enough for...a bullet."

Looking around at the bleak harbor shipping yard, Deadshot searched for his target. He knew the Agent would be here by now. He had after all been hunting him for weeks. He knew what the Agent's heart rate was. He knew his favorite weapon. He knew the amount of red blood cells he had running through his veins. Now, he would kill him. It would be no small feat. Killing a highly trained assassin who was made for combat. Seems unlikely, but Lawton had no time to waste on killing pesky little assassins who thought they ruled the world with their garrotes and fancy sniper rifles. None of them would ever match Deadshot's skill. None would dare come close, none would hit their mark. As Deadshot looked upon the shipping yard, he realized something: He was being hunted.

Deadshot turned and ducked behind a shipping container just as a shot flew where he was standing only moments before. "Amateur," Deadshot muttered, setting his M24 down behind the container and arming his wristguns. Semi automatic, armor piercing, wristguns. A personal favorite of Deadshot's. He knew not where the shot had come from, nor who had fired it. He stared at the bullet, now lodged in the concrete. "Seven point six-two caliber. Semi automatic sniper rifle. Seven-hundred meters. Pathetic," He said, rounding the corner and firing a wristgun shot directly through his attacker's scope. The round cut cleanly through the scope and lodged itself in the shooter's frontal lobe.

From atop a shipping container several hundred meters away, the sniper slumped over. The shot he received to the brain killed him instantly. His rifle; left in a bloody mess, showered in broken glass from the broken scope. He was yet another sniper hired to kill the greatest assassin of all time. Deadshot saw no challenge in killing his attackers. They never put up a fight.

Agent 47 watched as his partner bled out on the container. The man was a good shot. Better than any he had met before. This of course, would not prevent him from defeating him. He can hit at a range. A remarkable range, but everyone has a weakness. Go closer, He thought to himself. He set his WA 2000 down and leapt from his position on the loading crane and onto a nearby container. Picking up his hidden AKS 74U assault rifle from the crack between two crates, he leapt off the container and ran towards the direction of his target.

Deadshot knew he wasn't done with his foes. He knew there would be one more, a cheap and desperate trick to try and kill him. They were desperate. But who could blame them? Killing the world's best sniper was no easy task. He's moving closer, Deadshot thought to himself. He wouldn't simply let him get that close. He picked up his custom M4. Suppressor, ACOG scope, custom stock, laser finder, forward grip. It was built for the job, and the job wasn't very pleasant.

He heard footsteps. Light and quick steps. Getting faster. Getting closer. He turned and fired off a round towards his attacker. Missed, Tricky one, He thought. Suddenly, a burst of gunfire erupted from around the corner. Non-suppressed, from the AK line. Fool, he thought. But he was truly no fool. The bullet struck Deadhot's soldier. His armor held up, but he formed a welt the size of a walnut. Deadshot sighed and charged forward, firing semi auto bursts. Agent 47 runs behind the container after firing off a burst at Deadshot.

47 unloads and reloads his AK and reloads it before turning around the corner of the container and firing off a shot at his attacker. Deadshot sidesteps and fires a shot into 47's shoulder, knocking him on his back. As 47 falls, he drops his rifle. Deadshot walks up to him, rifle aimed from his hip at 47. 47 quickly draws the first of his two AMT Hardballers and shoots it into Deadshot's targeting eye. Deadshot falls back as his targeting piece on his helmet shatters. The bullet smashes through his eye and into his skull. Deadshot drops to his knees in pain, gripping his bloody eye.

47, still lying on his back, fires two more shots at Deadshot's chest. The bullets bounce harmlessly off Deadshot's armor and plink to the ground. Still holding his eye, Deadshot blindly fires one of his wrist rifles through 47's thumb, causing him to drop the gun. 47 stands and picks up his pistol, he swings a kick at Deadshot and clips him along the jaw. Deadshot drops to his chest and unsheathes his knife. 47 goes for another kick and Deadshot ducks and thrusts his knife into the assassin's thigh.