Amy predicted from her tarot cards that she would have a "destined" encounter with Sonic on the small satellite known as Little Planet. Amy thus traveled to Little Planet as it made its annual appearance. There, Amy found Sonic and instantly fell in love with, prompting her to grab him in excitement. However, Sonic did not reciprocate her advances.

At Collision Chaos however, Amy was kidnapped by Metal Sonic, Dr. Ivo Robotnik's latest creation and taken into Robotnik's captivity. Fortunately, after Amy got tied up in Stardust Speedway, she was saved by Sonic after he defeated Metal Sonic. After Sonic then defeated Robotnik and the doctor's base began to fall apart around them, Amy was safely carried back to earth by Sonic, where she only caught a glimpse of him running away and setting Little Planet free.

Ever sincee then, Amy has been chasing after Sonic non-stop, always trying to get him to fall in love with her. Despite Sonic constantly rejecting her and literally running for the hills if she's even in his general vacinity, she continues to stalk him, confident that one day, they'll get together. 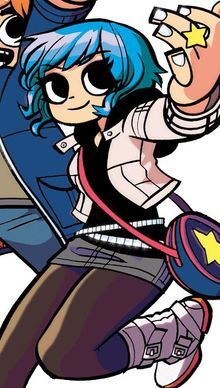 Little is known about the early life of Ramona Flowers until middle school, where her life was changed upon meeting Matthew Patel, a young man who used his magic powers to impress her, leading to a short relationship that ended when Matthew proved too impulsive and grating for her tastes. Following the end of the relationship with Matthew, Ramona would go on to date Lucas Lee, a skater who stalked her until she finally relented, before leaving him for telekinetic bad boy Todd Ingram, who used his powers to blast a crater in the moon in an attempt to impress her.

After Todd was accepted into Vegan College, Ramona broke up with him, attending the University of Carolina in the Sky, where she dated her roommate, Roxy Ritcher, before breaking it off and dating the Katanyagi Twins behind each other's backs, with the two breaking up with her upon discovering her duplicity. Ramona's life would change forever upon meeting Gideon Gordon Graves, a music mogul who abused her genuine love for him at every opportunity, leading to her breaking up with him and leaving the country, moving to Canada in an attempt for a fresh start, where she met Scott Pilgrim, who won her over with a mixture of persistence and charm. Unfortunately, Ramona's past catches up with her when the "League of Evil Exes", assembled by Gideon, declares war on Scott, forcing him to defeat each and every one of them in order to continuing dating her in peace.

Scott proves successful, defeating each ex until Roxy, when he finally confronts Ramona on her troubled past while she discovers that he had been in a relationship with Knives Chau when they started dating. The strain on their relationship causes her to cut ties with Scott and leave Canada, hiding out at her parent's home until Scott is killed by Gideon. The two reunite in Subspace and repair their relationship before confronting Gideon together, beating him after a vicious fight. Now free of her exes, Ramona resolves to stay with Scott and grow as a person.