The last time the match ended, Spinosaurus had defeated Tyrannosaurus, and Spinosaurus was the king of the Dinosaurs. However, the Tyrannosaurus Rex has returned to reclaim its title, by getting it's revenge on Spinosaurus! How will this rematch decide the outcome of this battle?

Who is the deadliest top preadator? 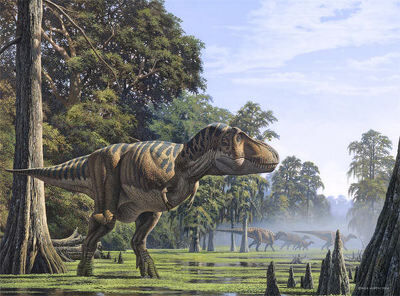 It was the one of most famous Dinosaurs of its time, having been in many movies such as Jurassic Park. However, there are sill many things we don't know about Tyrannosaurus Rex. It was the top preadator in the last age of the Dinosaurs, and it was successful in its time. It would steal dead animals that were killed by other animals, and was also a hunter as well. Tyrannosaurus Rex would most likely had feathers when they were babies. 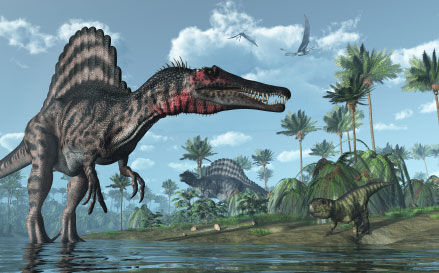 Biting Power:  While Spinosaurus' jaws were able to subdued a preadator, its jaws were designed to hold, not tearing meat. Tyrannosaurus on the other hand, has a bite that could crush bone.

Speed: Being big would put Spinosaurus would put him at a disadvantage due to Tyrannosaurus being a little more faster than it's opponent.

Experience: While Tyrannosaurus Rex was a hunter, Spinosaurus actually hunted most of the time due to its prey being mostly fish.

Arm Power: Not only is Spinosaurus has longer arms than Tyrannosaurus Rex's tiny arms, it was also equipped with claws.

Intelligent: While Spinosaurus was smart, T-Rex was much more smarter due to having to been very careful when trying to kill a Triceratops for dinner.

You may vote for Tyrannosaurus or Spinosaurus, but there has to be lease three sentence. If you made at lease ten mistakes, your vote will only count as half of a vote. If you made more than ten mistake or you only put one word in your sentence, you vote will not count at all. The voting will end on July 22.

Tyrannosaurus Rex had been searching for food for three hours, and he never had found prey yet. However, Tyrannosaurus had not only smelled food up ahead, but he also smelled a predator as well. Tyrannosaurus decided to walk forward to confronted a predator, and steal its food when he had the chance. He keeps walking forward, until he finally stops when he spotted a dead Triceratops.

Tyrannosaurus knew that he had to be careful since Spinosaurus was equipped with claws. It tried to attack T-Rex with its claws, but he dodged it, and sink his teeth into one of Spinosaurus' legs. As Tyrannosaurus Rex quickly let go of his rival's leg, Spinosaurus roared in pain due to its leg being broken. This give Tyrannosaurus Rex the chance to tackle Spinosaurus hard, knocking it off its feet. As Spinosaurus fell down, its throat had been impaled by the horns of the dead Triceratops, killing it quickly.