Asuna and Kazuto vs Cecily and Luke

Asuna: A former SATO player who earned the nickname, "Flash.

Luke Ainsworth: A blacksmith who is a very skilled swordsman.

Who is the deadliest team?

She was one of the manys players trapped in the game, and she tried to take matters into her own hands. She killed many monsters in a fast rate, even though Asuna risked her life to do so. Because of her actions, she has earned the nickname "Flash". Before Asuna would find the boss of the 1st floor, she met Kazuto after witnessing her killing many monsters. From then on, the bond between the two is strong.

Weapon: Lambent Light is a one-hand rapier, and the last rapier she ever wielded in Sword Art Online. 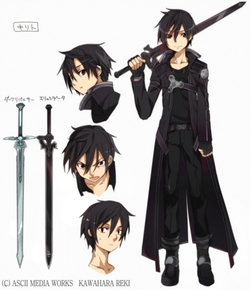 Before he met Asuna, he doesn't have much friends due to combination of not talking much, and closing off others because of his love for computers. But everything changes after he is trapped in the game along with other players. Then Kazuto would later met Asuna while he was witnessing her killing many monsters. He later saved her shortly after meeting her due to Asuna fainting from battling many monsters.

Weapon: Elucidator is a weapon that Kazuto was able to claim after the boss from 50th floor was defeated.

She was the member of the Campbell family, who tooked the role as a head of the house after her father passed away. This causes her to became a knight, like her family members before her. She was also caring knight, who would protect the citizens of the Independent Trade City as much as she could. In fact, she had wielded a demon sword named Aria.

Weapon: The demon sword was no normal weapon, she was a living being named Aria. This is the main weapon of Cecily Campbell, who cared about her. 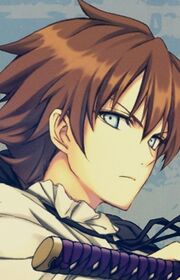 Luke Ainsworth wasn't just a blacksmith, he was also a skilled swordsman as well. He was a son of Basil Ainsworth, who was killed by Valbanill. Then after his father's death, he named his shop Lisa Oakwood after his late childhood friend. He was able to be friends with Cecily, although it would took time for him to accept her.

Weapon: The katana is the first weapon he ever made as a blacksmith, so it's not surprised that it is Luke's main weapon.

Sword Skills: While Luke and Cecily were skilled with swords, Asuna and Kazuto were able to mastered their swords much better than them.

Armor: Since Asuna and Cecily both wear some armor, it's a tie.

Intellect: While Asuna and Kazuto were smart, Cecily was smarter due to her leadership in the manga.

Experience: Asuna and Kazuto had both been though about 75 floors in the game, and have even defeat some of the bosses.

Brutal: While Asuna and Kazuto are not very aggressive, Cecily is not the person who would attack a possessed citizen attacking the city.

You can vote for either team, but it must have at least 3 sentence, as well as having a good reason why you vote for them. If you vote for them for the bad reason, or made up to 10 mistakes, you vote only counts as half of a vote. If you has only one word or have more than ten mistakes, then your vote doesn't count at all. The voting will be closed at June 19

Asuna and Kazuto were walking in the grassland in the search of finding the boss floor. However, they also heard that there were two new players joining in the game, and one of them also had a weapon not known in the game. They were both curious about the weapon, and tried to find the person who had that weapon.

"Asuna, we need to be careful when we did find someone with an unknown weapon," Kazuto warned.

As they continued to walked around the grassland, they find Cecily, and Luke approaching them. Then Asuna notice the sword that Cecily was carrying; it was the weapon unknown in the game.

"We had come to challenge you two to a battle?" Asuna asked.

Agreeing with the challenge, Luke drawed his sword, and Kazuto drawed his  sword as well. They were both blocking each others swords, hoping to see an opening. With Luke being focused on Kazuto, Cecily knew she could attack him, but she also knew it would be dishonorable to attack someone unguarded. Cecily turned her attention on Asuna, who draws her two rapiers in order to defend her self.

"I hope you better prepared yourself," Cecily warned as she began to swing her sword at Asuna, but she blocked it with her rapiers.

They kept clashing each other with their swords and neither opponent would landed a blow on the other. However, Asuna eventually stabbed Cecily in the stomach, causing her to disappear from the game. Luke witnessed Cecily's defeat as her sword was left behind.

Despite this, Luke continued the fight Kazuto, trying swinged his sword at his opponent, but he dodged it. Then Kazuto stabbed Luke in the leg with his sword, causing him great pain. Knowing his opponent wouldn't be able to move due to his leg being stabbed,  Kazuto finished him off by stabbing him in the stomach as well.

This causes Luke to disappeared, but not before he smiled upon Kazuto after the battle. Then he headed towards Asuna, who wad happy that Kazuto survived. The two looked at the sword that Cecily left behind.

Then he looked at Asuna and asked her, "I wonder what kind of sword this is?"

"Maybe we should leave it behind," Asuna repiled as she and Kazuto continued their search to find the boss room. It would be a hard journey, but if they could survive the game, then they could finally returned to the real world.

While Luke and Cecily were great at sword combat, Kazuto and Asuna had mastered their swords better than their opponents. In Addition to that, Kazuto and Asuna both had superior speed in battle, and they also had battled up to the 75 floor in the long run.

Since this is an online game, Cecily and Luke didn't technically die, as with 300 other players who were trapped in this game.