The Muses Sing of the Gods' Champion: Jason vs. Odysseus

We're taking the fight to legendary proportions as two of the most durable and powerful Greek heroes clash! Odysseus, the Trojan War veteran that sailed for ten years trying to return to his wife with nothing but his wits and cunning! Jason, the mortal captain of the Argonauts who fought Talos, pirates, and countless more in the quest of the Golden Fleece! Which sailor gets to sail home and live their future? Only the favors of you and the gods will determine this, and he shall be... 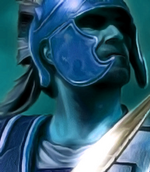 The king of the Greek island Ithaca, Odysseus was a cunning and brutal Greek warrior in the Trojan War. After devising the Trojan Horse, which would lead to victory for the Greeks, Odyseeus began a long journey back to his kingdom. Odysseus is trapped on the island of Calypso, having been thrown off course by Poseidon for murdering his Cyclops son Polyphemos, and remains there for several years. Arriving on the island of the Phaiakains, he retells his tale of battling Sirens' temptations, two sea monsters, travel the Underworld, and angering Helios.

Moved by his tale, the Phaiakains send Odyseeus home with treasure for his troubles. Arriving to see his wife Penelope under the assault of various suitors, Odyseeus proves himself her real husband by reciting their wedding vows and shooting an arrow through 12 axeheads. Satisfied that his wife still loves him, Odyseeus and his men slay the suitors with the favor of Athena. 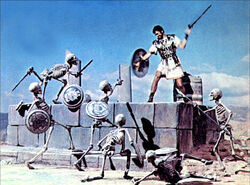 The son of the betrayed king of Thessaly, Jason was educated and trained by the centaur Chiron for fear that his treacherous uncle Pelias. Years later, Jason aided a disguised Hera cross the river Anauros, who blessed the hero and revealed the truth of his birth. Entering Iolcus where Pelias was holding games in honor of Poseidon, Jason claimed his rightful claim to the throne. Pelias challenged Jason to fulfill a quest for the throne; Take the Golden Fleece and he would give Jason the throne.

Assembling a group of sailors, adventurers, and pirates, Jason ventured to find this miraculous Fleece. With the wisdom of Hera, Jason sought the aid of Phineas. The blind seer tells the Argonauts to sail to Colchis, where he stole the Fleece with aid from Medea via seducing her. After abandoning her and marrying a woman to strengthen his political ties, Jason lost favor with Hera and was killed when the mast of his ship The Argo fell on him.

Both men have fought a variety of monsters and men alike. Jason's voyaged across the entire known world, against gigantic metal machines, vicious harpies, skeleton soldiers, pirates, and a dragon. However, Odysseus' feats are far more legendary, serving in the Trojan Wars and travelling the  Underworld alongside fighting a variety of his own monsters.

Odysseus was reknown for his ability to use dirty and unorthodox tactics against his opponents, such as the infamous Trojan Horse and his defeat of Polyphemus. He was the favored champion of Athena, his tactical ability was so great. Jason isn't a terrible tactician per say, but a majority of his sound decisions were with the aid of Hera.

Odysseus was a demigod, which means he has near godly strength in combat. Simply put, his strength is just superior to a mortal's like Jason.

Odysseus may be a genius, but he's also a sleazy leader and has a horrible temper. In fact, by the time he returns home he's lost entire crews of men due to his bolsterous nature and violent temper, such as the incident on Polyphemus' island. Jason, meanwhile, has united his crew of volunteers under the banner of Hera. On board the Argo, Jason is a very skilled leader of his crew.

"Praise to the gods, for my son's safe return!"

Odysseus raised a hearty glass to his father's toast, who remained at the other end of the table. With him was his beloved wife, Penelope, and his loyal son Telemachus. Most times, celebrations were preceded with grand parades and games to test a man's mettle and worth. This, however, was a private party; only close family and friends had known about this.

One such friend was Jason the Argonaut, who sat beside his old comrade Laertes. Despite his days adventuring the known world as an Argonaut had long since past, the man was still fit and could best any man half his age. Jason nodded in agreement.

"Aye- it was but the gods' grace and your son's own wit that let him survive the many tests that had been set before him." Jason remarked.

"Finally meeting the famous Penelope, though, I can see why he'd fought so hard to return!"

Penelope smiled at the compliment, but Odysseus raised his eyebrow suspiciously.

"And what exactly does that mean, Jason?" He asked, his voice dangerously low and threatening in tone.

Jason did not catch the subliminal message, however, and continued. "She is a vision of loveliness, Odysseus- I've rarely seen any woman in all of Greece to rival her beauty!"

Laertes sensed Odysseus' growing temper, and attempted to defuse the mounting tension. "Consider it nothing, son. Jason here was just complimenting your wife."

Odysseus, knowing he could not openly attack his father's old friend due to such a small offense, begrudgingly let out a half-hearted chuckle as he relaxed slightly.

Onboard the Argo, Jason awoke drowsily. It had been years since he'd heard her voice. He thought that his service to the gods was over now, and he could relax as a king would.

"Jason..." The voice of Hera whispered once more. As he slowly looked around his cabin, he saw the silhouette of a man.

Her sudden outburst within his head filled him with alertness and energy, and Jason sprang out of bed as the assailant's dagger fell where he once slept. Very much awake now, Jason quickly tackled the man and wrapped his arm around his neck.

After a brief struggle, Jason snapped the man's neck with a tight jerk.

"Awaken, crew of the Argo!"

Jason hastily put on his armor, before grabbing his shield and Hera's Brooch. Prepared for combat, Jason raised his shield and kicking down the cabin door. Outside, he saw two of his men suddenly awaken as well, but the rest of his crew was mercilessly slaughtered by three more men.

He quickly recognized their leader; Odysseus, his bow drawn and face a mask of rage. He released the arrow, and Jason reacted immediately by raising his shield for protection. By now, his men were armed as well, and the two heroes locked eyes for a split moment.

Above them, watching from Mount Olympus, Athena and Hera watched in nervous excitement as their chosen champions prepared to battle for glory and legacy.

Jason was the first to break the gaze, swiftly marching forward. One of his Argonauts joined him, Gladius in hand, while the other prepared his composite bow. Odysseus let loose several arrows, but all simply clanged against the bronze Aspis.

"You'll have to try better than that, boy!" Jason taunted, quickly jabbing at the nearest of Odysseus' soldiers with Hera's Brooch.

Odysseus snarled with disgust as he quickly hid behind the masthead of the Argo as a sailor let loose several arrows at him. Drawing his Xiphos, he quickly rolled out of his cover and behind several barrels that had held cargo. He nodded at his guard, who hefted a mighty Mycanean battle axe and charged toward the archer.

Jason and his comrade, meanwhile, had gained little ground. The Argonaut and a guard were locked in a deadly sword clash. Jason managed to parry another stab, before thrusting himself. The guard's scale shield easily twisted the weak spear, causing him to lose balance.

Before Odysseus' guard could land a finishing blow, he jerked suddenly as an arrow landed directly into his throat. Grasping it's shaft, he fell onto one knee for a brief moment, and slumped forward dead.

The sailor quickly helped him to his feet, before both were interrupted by a scream. Looking in it's direction, both looked in shock as Odysseus' soldier assaulted him. Chopping downward, Jason's crewman weakly blocked with his bow, the wood snapping. The flow of his chops continued, one cleaning chopping into his ribs. The axe sunk with a sickening crunch as it broke past the armor and into his side.

Jason, furious, hefted the Brooch in hand. "Aim slightly to your left, my champion."Hera whispered, and Jason made a slight adjustment to his aim. Just as the axemen unlodged his weapon from the deceased sailor, Hera's Brooch flew cleanly through his own chest. The godly weapon pierced him, and he fell forward with a thud.

Odysseus roared, sprinting forward and ramming into the last sailor. As he charged, he grabbed the surprised and stunned victim and slashed his short sword across their neck. Odysseus then flung the corpse to the side and over the boat, where it sunk deep into Poseidon's domain.

Jason hastily drew his Gladius as Odysseus grabbed a shield. "You honestly thought you could disrespect me?! In my own house, in front of my own wife?" Odysseus roared, furiously lashing out.

"You fool! You are racked with hubris, and your sound judgement is clouded by your pride and anger!" Jason said, blocking and countering with a slash. The two heroes continued their contest, neither giving in or slowing down.

"Be careful, Jason. Your foe is smart, and has the virgin goddess of wisdom aiding him."

Athena scoffed at the queen of the gods, who continued to give minor bits of advice. Within a second, Athena dashed to the deck of the Argo, and titled Jason a small bit with an act invisible to the mortal eye. She quickly returned to Olympus, a shocked and stunned Hera waiting for her.

The Argonaut stumbled, allowing Odysseus to make a devastating slice to his hamstring.

"Haha! You have fallen, and now are at my mercy!" Odysseus boldly bragged as Jason feebly attempted to stand. This attempt ended only in Jason falling to his face once more, left unable to stand.

"Unfortunately, there is none for you!"

As Odysseus aimed his Xiphos at Jason, the fallen hero muttered one last curse.

"Damn you, Odysseus! People will hear about this, and they will demand blood!"

The king, understanding, nodded sadistically. Athena summoned a gust of wind, carrying the Mycanean battle axe and having it land in front of Odysseus. As he chopped at the Argo's mast, he looked at his defeated foe. In a matter of minutes, Odysseus has chopped the mast almost completely.

He then dragged Jason in it's shadow, and moved to the other side. With a devastating kick, Odysseus toppled the mast, sending it downward and landing on Jason, crushing and killing the last Argonaut.

People thought that Jason, despite his own impressive feats, couldn't handle Odysseus. The king of Ithaca was able to outthink, outfight, and outmaneuver the Argonaut, making him an all-around better warrior. Add the fact that Athena was far more willing to directly intervene in the fight than Hera ever would, and Odysseus easily defeated Jason in this battle of classic heroes.