Today, two deadly and lethal shock troops of the Middle Ages collide in a battle of bows, blades, and cold hard steel! The Mongols, the horseback riding troops of Genghis Khan, who conquered the largest land mass ever established by any empire in history! The Varangian Guards, the Viking mercenaries under employement of the Byzantine Empire, who protected their emperor with a iron-willed determination! WHen the Mongol war machines march to the gates of Constantinople, these two will inevitably collide! Savagry will meet savagry, but once the war drumbs stop playing only one can be... 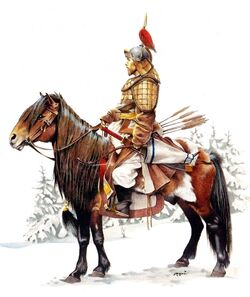 The Mongol Empire spanned from Eastern Europe across Asia, and is commonly referred to as the largest contiguous empire in the history of the world. It emerged from the unification of Mongol and Turkic tribes in modern day Mongolia under the leadership of Genghis Khan, who was proclaimed ruler of all Mongols in 1206. Under the Mongols, new technologies, various commodities and ideologies were disseminated and exchanged across Eurasia. The Empire began to split following a succession war in 1260-1264, as there was dispute as to which of Genghis's grandchildren should become the next Great Khan. The Mongols dissipated into a variety of lands, some settling in India, some basically creating Russia, and others moving to China. 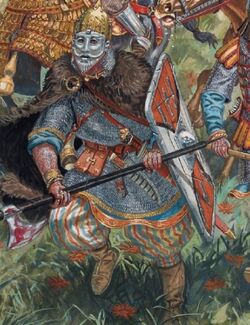 The Varangian Guards were personal bodyguards of Byzantine Emperors for the majority of the Dark Ages. Mostly hailing from Anglo-Saxon England and Scandinavia, these mercenaries served as both bodyguards and occasional shock troops used by the Byzantines. Originally formed in 988 by Emperor Basil II, these troops were chosen to be his personal bodyguards because of their nearly unwavering loyalty to him. It wasn't until after William the Conqueror's invasion of Anglo-Saxon England that the Varangians began recruiting from the men from those regions as well. The Varangians were very prominent in the defense of Constantinople during the Fourth Crusade, and were key in the Battle of Beroia for Byzantine victory. The last historical mention of these axe-wielding mercenaries was in 1400 in Constantinople. The primary role of the Varangians was as bodyguards, performing ceremonial duties and police work in affairs of treason and conspiracy.

Both warriors have received specialized training for combat, horseback archery and bodyguarding. However, I'd like to point out the fact that the Mongol's conquests brought in a variety of new ways of life, combat, and skills. This, coupled with the Mongol's traing in archery from childhood, gave them intensive variety of training. The Varangians were taught to raid and how to bodyguard, but often trained laxly and to keep skills sharp. They kept an autonomy to their actions, and as defensive warriors didn't need to train as hardly or strictly.

The Mongol's extensive conquests kept a warrior who lived through it with a variety of experiences. Whether it be Turkish invaders, Chinese rebels, Persian warriors, or early Russian-Kievan soldiers, the Mongols were always busy in combat. The Varangian's more homeland security-like role may have given them experience during times when Cosntantinople was under siege, but have only seen a few battles.

The Mongolians' diet consisted of fish and other protein-based food. While this does mean that the Mongol received great strength, their stamina was lacking. The Varangians could receive any food they wished, being in the capital of the Middle East during their peak of service. Foods from Asia, Europe, and Africa were all brought to them, giving the mercenaries a varied and healthy diet.

This is close, especially considering the military histories of these warriors. The Mongols' were an iron-willed war machine under the command of Genghis Khan, but after his death most immigrated to other territories. This shows that while they admired Genghis Khan's tactical ability, it shows that they weren't as loyal to his descendants as they were to him. The Varangian's may have been mercenaries, but their primary role was as bodyguards and had to keep a constant vigilance over their emperor.

And with a scream, another Byzantine legionnaire fell.

Two days earlier, the Mongol war machine crossed almost five thousand kilometers xto the gates of Constantinople- the very center of Western civilization at the time. The catapults did their fair share of damage to the walls, but the proud city stood strong and tall. That was why, despite the risk, it seemed they'd need men on the inside.

Five Mongolian scouts sprinted towards the palace, weapons in hand. The main Mongol attack force- let in by an opened trade tunnel- had already begun to engage the bulk of the Byzantine defense forces. The scouts, worth proven, now advanced on the palace, where local reports said the emperor himself hid during the siege.

As the Mongols approached the palace, one wielding a glaive launched backwards. He landed with a thud, an arrow in his leg, and a thrown boar spear in his chest.

The rest looked to see five Varangians- highly trained Viking mercenaries reassigned to bodyguarding the emperor. According to intelligence, they performed their jobs with a deadly efficiency.

The Mongols charged, with one standing behind to cover their advance. He aimed his composite bow, launching arrow after arrow as a Varangian attempted to return fire. Before he could land a successful hit, the Mongol archer finished him.

With the Varangian dispatched, he looked at the skirmish at hand.

One Mongol swung his mace, keeping two guards at bay. He swung horizontally, and happened to smash into one's shield. Letting out a primal grunt, the Varangian sagged backwards to avoid further damage. His companion, seeking vengeance, shield bashed the Mongol. He then whipped his short sword forward, precisely stabbing into his throat.

The Varangian looked at his fellow guard, and winced in disgust as he watched an arrow finish him off.

He then continued on to find another target. Two more guards were viciously engaging two more Mongols, axes and steel shortsworsds fighting sabres and maces. One took a mighty chop, missing only by inches.

The Mongol swiftly covered the space, and decapitated the guard before he could say a word- as well as before he could react to the other guard thrusting his sword into his spine.

The Varangian turned to swing around, but a mace blow to crumple him at the knee. With a final roar of agony, the Mongol finished with a devastating smash to his skull.

The Mongol and final Guard stood face to face, and started a vicious fight. The Mongol continued to swing his mace- the momentum and weight preventing the guard from closing the distance.

Distracted, the Varangian never noticed as the Mongol archer snuck up behind him. All he did notice was the tight sensation as the lasso closed around his throat. Dropping his sword, the Varangian gripped in vain as the Mongol choked the life out of him. His vision darkened, his breathing became strained, and grip on the lasso weakened.

And then, his vision went black...and the breathing stopped.

The Mongols' experience and training let them take this battle. While the Varangian Guards were disciplined and skilled combatants, their weapons and training weren't enough to protect the empereror from the Mongol war machine.