This is a DHRI, so whether or not this gets written is dependent on demand and - more importantly - my mood. 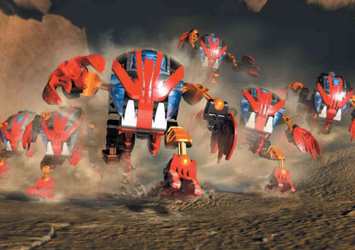 The Tahnok, like other Bohrok, were created when the Av-Matoran accomplished their destiny and are transformed into machines. They cleanse Mata Nui's island with fire, burning and melting everything in their path. During the Bionicle story, the Bohrok swarms were awakened by Makuta Teridax to get vengeance on the Toa Mata. The Tahnok attacked the village of Po-Koro and the surrounding Po-Wahi, laying siege to the village. The swarms were eventually driven away by the combined efforts of three Toa.

Another swarm was trapped by Gali, Pohatu, and Kopaka by a flood, but half of them were able to escape by boiling away the water. Kopaka later tracked a swarm of Tahnok while picking off stragglers to locate their nest. After the Toa Mata invaded the Bohrok's nest and imprisoned their queens, the Bahrag, the Bohrok became docile and were used as labor by the Matoran they once terrorized and as auxiliary forces if the Toa Nuva felt their numbers weren't enough. When the Bahrag were reawakened to prepare for Mata Nui's return, the Tahnok were finally able to carry out their task, save for the swarm that was sent into orbit. 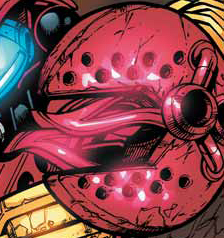 Each Bohrok type carries a pair of tools called "shields." Tahnok uses Fire Shields, which have the ability to produce heat or flame hot enough to burn or melt through any substance on Mata Nui, including metals. They create enough heat to flash-melt rock, allowing Tahnok to melt handholds into canyon walls as they climb. The shields could also function as melee weapons, or be used for defense. 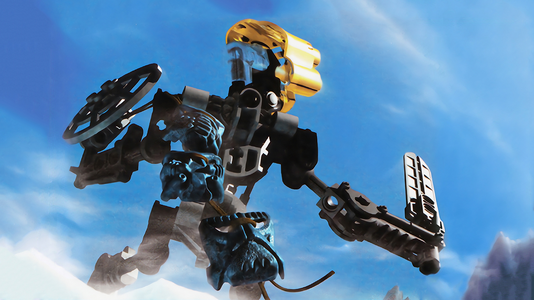 The Krana are the "true" form of the Bohrok, as the only living part of the being. Created from the waste made when creating Matoran, each Krana controls the entirely mechanical shell of a Bohrok. There are eight kinds of Krana, detailed in the next tab, and each swarm has its own style. This gives 48 unique Krana types, not counting their dormant state or the Krana-Kal.

The Krana themselves can be ejected from the Bohrok that house them, and can latch onto other biomechanical beings and assimilate them into the Swarm. Beings that are organic cannot be assimilated to the Swarm.

For a total of 400 active Bohrok 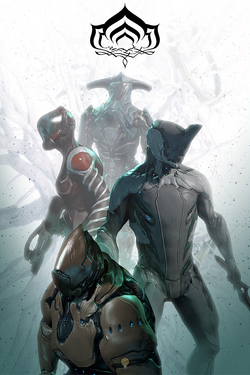 The Tenno are child soldiers, originating in the Orokin empire. The Tenno were initially normal children, aboard a military ship that malfunctioned and vanished into the Void, a chaotic space where physics works differently. When the ship returned, against all odds, the children were the only survivors, having gained powers beyond their control. The Orokin kept them for study, seeking to control their power. A researcher named Margulis had a breakthrough, having the Tenno control their abilities through dreams. Margulis was executed, and her research was used to create a process known as Transference.

Transference allowed a Tenno to remotely operate a Warframe that enhanced and focused their powers. Warframes were the still-living bodies of other humans, created through experimentation with a mutative virus known only as the Infestation and grafted with technological implants. These humans were wracked with pain and rage, and were only calmed and controlled by the Tenno's innate empathy. With the Transference perfected, the Orokin started to mass-produce Warframes, storing the bodies of the Tenno in specialized machinery, far from the lines of battle. They used Transference to pilot Warframes against the Sentients, another species of Orokin design that turned on them.

Their operations were the only success the Orokin had against their former servants, and the Tenno eventually turned the tide. With the Sentients vanquished, the Tenno turned on the Orokin themselves. Begrudging their masters the death of Margulis, who they thought of as a mother, they slew the Orokin leadership, sending the empire into chaos. A sentient named Natah collaborated with the Tenno, turning on the other Sentients and sealing their bodies within the Void rather than destroying them. The Warframes were placed in stasis pods across the system, and Natah rebuilt herself as the Lotus.

Thousands of years later, the Tenno would reenter the galaxy through their Warframes. They acted as a mercenary corps under the direction of the Lotus, attacking the various factions spread around the system for pay and resources. While some Tenno tended to work independently, they would also frequently operate in four-man squads, known as Cells.

Shielding
All Warframes, like many factions in Warframe, have an energy shield, which regenerates if they don't take damage for a while.
Parkour
All Warframes are also very agile, able top vault, run up walls, and jump dozens of feet into the air.
Combat Prowess
As space magic supersoldiers piloting genetically engineered combat suits via possession, the Tenno have a notably high combat experience and general ability. A single Tenno will routinely kill several hundred enemies per mission, who have similar weaponry (though no space magic) to their own. 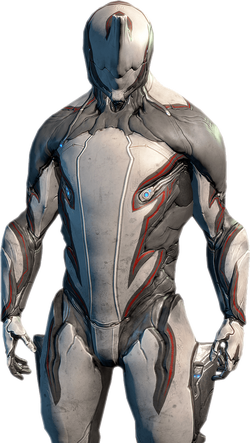 Slash Dash
Excalibur charges between enemies in a 12m cone in front of it, slashing them with the equipped melee weapon.
Radial Blind
Excalibur releases a bright light, blinding those within 25m
Radial Javelin
Excalibur summons 12 javelins, which are technically actually swords, to strike a single enemy each within 25m. The javelins position themselves to strike when summoned, bypassing terrain obstacles.
Exalted Blade
Summons a blade of light that replaces Excalibur's melee weapon. Shoots beams when swung.
Passive
Excalibur is a master of blades, and can use bladed weapons more effectively than other Warframes 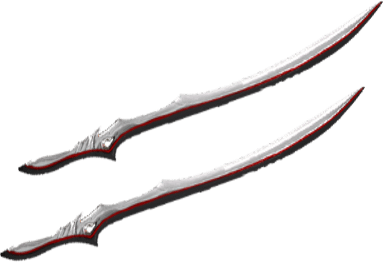 A pair of short swords of Tenno design. Each blade is 2.5m. 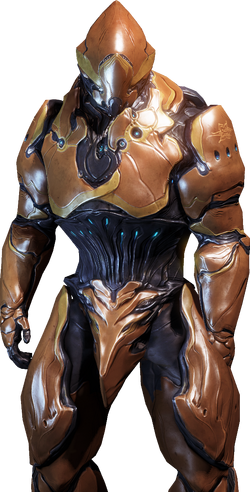 Rhino Charge
Rhino charges forward, ramming and damaging enemies in his 12m path. If Rhino charges again within a second of his first charge ending, he goes 1.5x further and does twice as much damage.
Iron Skin
Rhino becomes invincible for three seconds, gaining armor afterwards. The armor's health is proportional to the damage absorbed while invincible, added to a base health of 1,715. If Rhino Charge is used while under the effect of Iron Skin, those hit will take extra damage.
Roar
Increases all damage dealt by self and allies within 25m by 50%
Rhino Stomp
Rhino stomps, damaging and throwing foes in a 25m range into the air. Those in the air are in partial stasis, moving 97.5% slower than normal. Even while falling. Rhino Charge deals double damage against enemies under the stasis effect.
Passive
Falling more than 40m creates a shockwave upon landing, damaging enemies in a 6m radius and knocking them down.

An automatic shotgun of Tenno design, with a wide spread and low damage. 8 pellets per shell, 20 shells per mag, carries 6 additional magazines

Null Star
Nova generates six orbs of antimatter which orbit her, and will automatically launch themselves at enemies within 12m. Each active star reduces incoming damage to Nova by 5%, and Nova cannot replenish the stars until they have all been used up for attacks.
Antimatter Drop
Nova creates a guided, unstable orb of antimatter, which absorbs all damage directed at it. Upon contact with a solid object, it will detonate, adding 700% of damage absorbed to its power.
Worm Hole
Creates a wormhole, instantly teleporting any beings or projectiles crossing it 50m forward. Up to 4 beings may use a portal, after which it collapses. Momentum & velocity are maintained.
Molecular Prime
Nova sends out a 5m radius wave of antimatter, which will further travel at 5m/s for 6s. Enemies hit by the wave will be coated in antimatter ("Primed") for 30s, which doesn't immediately annihilate because space magic. Instead, it doubles the effectiveness of all incoming damage, slows them by 30%, and causes a 10m radius explosion upon death. Repeated casts will not extend or refresh an active Primed debuff, and can only be reapplied once it wears off. 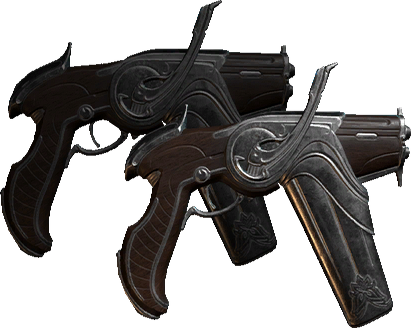 A pair of automatic pistols of Tenno design. Each pistol holds 35 rounds, and the pair holds 70 rounds between them. They appear to have some form of ammo linkage so that one pistol can use both magazines. Carries 6 additional magazines, allowing for three full reloads. 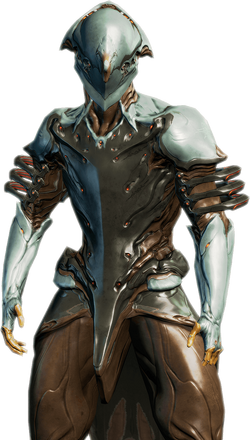 Shock
Discharges electricity, which arcs to enemies up to 15m from where it hits, and can arc up to 5 times. Enemies hit will be stunned. Will also give the Electricity status effect, dealing electric damage to the affected foe and other foes within 3m over the course of 6 seconds. Casting Shock against a target stunned by Discharge will cause an explosion.
Speed
Volt and allies within 25m will have their speed for all actions, from movement to reloading, increased for 10 seconds.
Electric Shield
Creates a 4.25x6m shield which blocks incoming fire for 25 seconds. Any weapons Volt or his allies fire through the shield does additional damage on hit. Volt may pick up the shield, shrinking it to 2x3m, and may place it back down, where it will return to its full size. The abilities of other Warframes do not gain the additional damage, with a few exceptions that do not apply. Casting Shock through the shield will electrify it, damaging enemies who pass through it.
Discharge
Volt emits a pulse over 20m. Enemies hit by this initial pulse or those who move within the 20m radius within 4 seconds will be stunned. Each enemy stunned will discharge electric bolts at enemies within 8m. After 4.5 seconds of being stunned, enemies will take heavy damage themselves.
The stun duration and damage has a falloff, starting at 6s at Volt's position & reducing to 3s at maximum range. Enemies stunned for under 4.5 seconds won't take damage from Discharge, though they will take damage from the bolts from other enemies.
Passive
Traveling between weapon shots or ability usage will add damage to the next weapon or ability use.

An automatic rifle of Tenno design, which fires bolts instead of bullets. The bolts can pin an enemy to a wall, as well as traveling slower & dropping faster than normal bullets.