The demons, devils, and fiends of fiction are many and vary wildly in appearance, power, disposition, and intention. They can be simple and mischievous spirits, honorable yet vile archfiends, or hellish gods fighting in cosmological battles for dominance. However, there is one thing that almost all demons have in common: an endless lust for power. Today, in another chapter of the DFederal Homelessness Relief Initiative, we'll be looking at two incredibly powerful demons who are utter slaves to that desire. They are Blackheart, the son of Mephisto who will stop at nothing to corrupt pure souls and overthrow his father, and the Demi-fiend, the teenager who attained the power of a true demon and became Lucifer's right-hand man! Let's find out which demon is DEADLIEST! 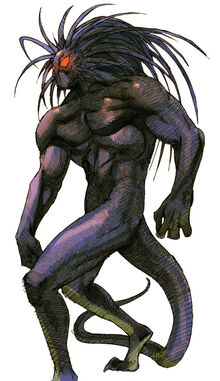 In the small town of Christ's Crown, New York, centuries of violence and sin drew the attention of Mephisto, the ruler of Hell. Mephisto used the accumulated evil energy to create a new demon, one he named Blackheart and referred to as his son. Possessing the same evil intentions as his father, Blackheart was mentored in the ways of evil by Mephisto before being turned loose on the world. He first revealed himself to Daredevil and Spider-Man, two superheroes that he sought to corrupt, but his most frequent enemy has been Johnny Blaze, the Ghost Rider, who he has tormented to no end. Blackheart also possessed a strong desire to replace his father, spending much of his time seeking ways to empower himself and become the new ruler of Hell. Despite being defeated or killed numerous times by the superheroes of Earth, Blackheart is eternal like his father and always returns to bring further torment. 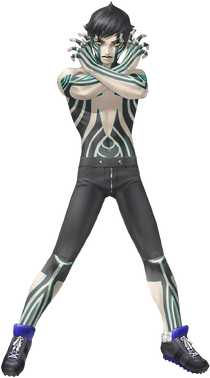 The Demi-fiend was once a high school student named Naoki Kashima. On the day that Naoki and his friends went to visit their teacher, the world was destroyed and reshaped by the Conception, an apocalyptic event intended to prepare the world for recreation. In the ruined, demon-infested world, Naoki encountered a mysterious figure who granted him the powers of a demon. The Demi-fiend traveled the ruined world, seeking a purpose. He encountered his friends and other surviving humans and learned of their desire to gain power and control the coming recreation in accordance with newfound ideologies. The Demi-fiend fell prey to his demonic instincts, killing his former friends and sacrificing any possibility of recreation to empower himself. He then encountered the mysterious figure, who revealed himself as Lucifer. After proving himself in a battle against Lucifer, the Demi-fiend was transformed into a true demon and appointed as Lucifer's general in the coming battle against God.

Compared to other demons, Blackheart is relatively young, having only been created by Mephisto after the start of the Heroic Era. However, he's been trained by Mephisto himself in the ways of evil, and his machinations have threatened Earth several times, and his mettle in scheming and battle has been tested against several superhero teams, including the Avengers, the Inhumans, the Champions, two Ghost Riders, and more than a few ragtag bands of mistfits.

Although the Demi-fiend's quest through the apocalyptic Vortex World was relatively brief, it was basically a non-stop battle. The Vortex World was filled to the brim with all kinds of violent demons, varying wildly in form and abilities. The Demi-fiend quickly became an expert at dealing with them, both through force and manipulating them into backing off or joining his side. Countless creatures and gods from numerous mythologies and religions have fallen before him, including archangels, princes of Hell, and the Four Horsemen of the Apocalypse. Even Lucifer himself was impressed by his power.

Blackheart is strong enough to contend with the Red Hulk, who can smash asteroids and create fissures with his blows, in a physical brawl. He's fast enough to fend off and defeat large groups of superheroes at once, even when they include notably quick heroes like Spider-Man, Falcon, and Jane Foster. Even without his regeneration, he's tough enough to laugh off bullets, lasers, and having houses dropped on him. He draws strength from pain, as shown when he was empowered by Ghost Rider's Penance Stare.

The Demi-fiend carries no weapons, being strong enough to tangle with and beat down demons much larger than him with his bare hands. He's significantly stronger than trolls, who can tear apart metal structures. It terms of speed, he can keep up with Dante from the Devil May Cry series, who's fast enough to effortlessly slice bullets out of the air with his sword, in battle. He's endured countless attacks throughout his journey, such as magical spells, holy explosions, and blows from massive and powerful demons. He's even tough enough to survive a fall from the top of a sixty-story building, albeit not without serious injury.

Blackheart is an egoist and sadist that sees physical combat as beneath him and doesn't seek it out, much preferring to mess with his enemies' minds or let his minions do the fighting for him while he smugly watches from the sidelines. With a little preparation, Blackheart can pull this off against entire teams of superheroes, letting them waste time with figurative and literal demons as he works on a master plan. When pushed to his limits, however, Blackheart is a force to be reckoned with, unleashing his full power to brutally overwhelm his enemies.

Even with all his demonic power, the Demi-fiend wouldn't have achieved as much as he did without being an intelligent strategist. He is very familiar with his own abilities and those of his demons, is quick to identify his enemies' strengths and weaknesses, even without using his Analysis spell, and can quickly devise and implement effective strategies to take down demons that possess unique spells, are protected against conventional attacks, or completely dwarf his own party in raw power.