Percival King vs. Jonathan Joestar: To Always Do What's Right

When it comes to fiction, you always have those who will do what's right, and defend those who need defending. It's a hard task to live up to. Those who take part in this noble quest are often brave, courageous, selfless...

...and sometimes, just a tad bit stupid, but in a charming way.

Percival King, officer of the Sweet Jazz Police Department, and all around do-gooder.

Jonathan Joestar, a Victorian gentleman who would reluctantly fight his adopted brother, unknowingly starting a bizarre mess of problems for his future descendants.

During the course of the series, she goes to the museum to confront the nefarious ne'er-do-wells known as the Banzai Blasters, but they had managed to get away from a valuable artifact known as the Arsene Amulet. Percy, while on a mission to retrieve the amulet, teams up with a conman by the name of Ramsey Murdoch, and they work together to both take down dangerous bounty hunter, Zora Salazar, and to retrieve the Arsene Amulet. 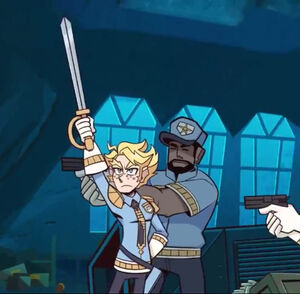 Unlike what you'd expect from a police officer, carrying a gun and maybe a nightstick for close quarters combat, Percy wields a real ass goddamn sword, which she holds with skill and pride. I'm unaware of what type of sword this is, but it seems to have a long, straight, double edged blade, with the addition of a hand guard around the hilt. Outside of her Epithet, this is Percy's only way of engaging in combat. Doesn't mean you should underestimate the woman, though. I mean, come on, that's a real ass sword. 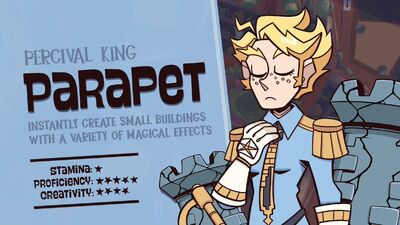 Percy is what is known in the Epithet Erased universe as an Inscribed. This means that she possesses an Epithet. This is a word that is written into someone's soul, given them special, magical powers. When it comes to Parapet, her epithet, it allows her to create a variety of buildings, that can both provide buffs and attack those around Percy.

When she erects an apothecary, Percy can heal those around her or calm their emotions. However, it cannot heal mental damage. Wizard towers have offensive capabilities, being able to shoot electricity from the top. When using two wizard towers, they have an electromagnetic field around them, powerful enough to stop bullets mid-flight. The third building that has been revealed is a forge. While this forge is said to increase defensive capabilities, it's unknown how exactly this works.

Percy's Epithet does have a few minor limitations, though. The foundation that Percy creates the buildings on is important. A tower built on dirt will be not as effective as a tower build upon wood. Percy cannot place a tower on organic material. It should also be noted that Percy has terribly low stamina when it comes to her Epithet. During an encounter with the Banzai Blasters, though she only built two wizard towers, she was greatly exhausted by the end of it. Extensive use of her Epithet can even cause her to pass out.

Just something I'm putting here for the sake of it because some people wanted me to. While Epithet Erased characters can have bones broken and limbs cut off, they haven't been shown to be able to bleed due to these injuries. One can argue that this is mainly due to the attacks dished out not being bladed in nature, but this is still something that should be noted, just to take into consideration. 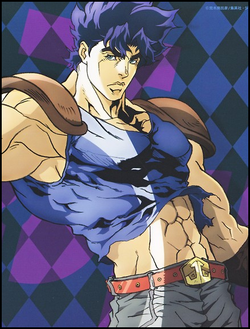 Even though his mother died when he was only an infant, Jonathan lived a relatively happy life. When his father adopted a little brat of a child by the name of Dio Brando, however, everything began to change. Hell, Dio killed his dog, constantly tormented him, and stole his girlfriend, Erina's, first kiss. When his brat of an adopted brother got his hands on a stone mask, he basically killed Jonathan's father, and became a monstrous vampire creature. With the help of a man named William Zeppelli, Jonathan learned about a fighting technique known as Hamon, which allowed him to channel sunlight into his attacks, allowing him to do...funky things. We'll get into that in a bit. 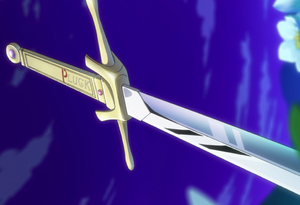 A weapon taken from the undead warrior Bruford after defeating him in battle, Jonathan proves to be rather competent with the sword. Though it is, ultimately, just an ordinary broadsword, Jonathan can infuse his hamon abilities into the sword, allowing him to extend the reach of his powers and avoid a close quarters confrontation. 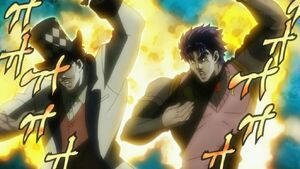 An ancient Tibetan technique, Hamon, also known as The Ripple, is the perfect counter to any undead assailant, due to the fact that it uses their own weakness of sunlight against them. Using Hamon, as long as proper breathing is maintained, Jonathan can channel sunlight into his attacks and push it into an opponent. While it is a technique specialized for killing the undead and the undead alone, it still proves to be useful in general combat scenarios due to a variety of reasons. I'll list a few special techniques of Jonathan's when he uses Hamon.

Zoom Punch: An attack where Jonathan can, weirdly enough, extend the reach of his attack by basically dislocating his shoulder and having it...zoom forward, I guess? The name doesn't make much sense. Jonathan can use this to stay at a distance even while punching people in the face.

Overdrive: Channeling waves of Hamon through either his fists or his sword, Jonathan can basically just hit things harder. Jonathan has upgraded this technique into Sendo Hamon Overdrive, as well as making it fit more specific scenarios, such as one that works better underwater, or otherwise. Overall, Overdrives just let Jonathan hit harder, knocking people through the air and causing damage to the environment. With Overdrive Barrage, Jonathan can unleash a flurry of these blows. Basically a stand rush without the stand-

Percy is a police officer working for the Smooth Jazz Police. While we don't know how long she's been on the force, or how much action she has seen, odds are she at least has some experience dealing with the ill mannered ruffian or two. On top of that, during the course of the show, she deals with a dangerous bounty hunter, Zora Salazar, and, with the help of Ramsey, was able to actually defeat her and drive her away. This isn't anything to scoff at, considering Zora had been bounty hunting for a fairly long time, and she has a very powerful epithet to boot.

Jonathan does not have that much when it comes to experience. While yes, he does end up fighting a variety of creatures and people, this isn't over a long period of time. Safe to say all the events of part one after Dio turned into a vampire took place over the course of likely a week or so. That being said, he was also given William Zeppeli's experience and skill, after William passed them onto him shortly before...passing on. That likely helps him in certain regards.

Once again, Percy is a full fledged police officer. Because of this, she has likely gone through some sort of academy training to make sure she knows what to do when out in the field. While its unknown how extensive this training is or how long it took place, it's safe to compare it to police officers in our modern day law enforcement.

Jonathan does not have much in terms of real training. While he did take boxing growing up, and presumably had a coach to help him out, that doesn't really mean much in the long run. He was also trained for a very short amount of time by William Zeppeli, however, due to the severity of their situation, Jonathan wasn't able to take in much training at all. Again, he was only fighting for a a few days at most.

Percy isn't exactly the poster child of strength, to be honest. She doesn't have many strength feats in general. She can drag around Ramsey when they were handcuff, and used her strength alongside momentum to fling both her and Ramsey through the air, which is admittedly fairly impressive. What's really impressive, however, is her speed. When equipped with her sword, she was able to deflect bullets fired from Zora's guns, without knowing where they were coming from beforehand. This was while she was dragging around Ramsey too, so imagine what she's like when she's not dragging around dead weight (no offense to Ramsey).

Meanwhile, Jonathan is a mountain of a man. Seriously, even before he had gotten awesome Hamon powers, he was an absolute beast. After getting his Hamon powers, Jonathan was capable of bending metal bars, and could shrug off multiple attacks from the undead armies. He could also fight toe to toe, and keep up with, Dio, who is no one to scoff at. He's a powerful guy, and fast enough to overwhelm your average old timey police officer. Combine that with the fact that he can heal himself and Jonathan would be a very scary guy to have against you.