A Unicorn; the ferocious, untamable beast that has fought and slain powerful dragons!

A Smilodon; the legendary saber tooth cat who managed to force the extintion of terror birds!

Who is deadliest? To find out, our wikians are testing history's most lethal weapons. We'll see what happens when these two warriors go toe-to-toe. No rules, no safety, no mercy. History will be re-written in this duel to the death to decide who is the deadliest warrior!

In modern times, unicorns are mostly thought of as kind, gentle creatures appearing in fairy tales or children's fiction. During the Middle Ages, however, they were viewed as untameable wild animals prone to attacking and killing nearly any living thing they came across. Unicorns were so ferocious and strong, it was said, that they were able to impale and carry off elephants on their horns, eventually dying from starvation because they were unable to shake the carcass off.

Unicorns were impossible to be captured alive, and so powerful no human hunter was able to stand against them. In spite of this, unicorn horns were very valuable, since they were able to detect and neutralize any poison. The only way to catch or kill a unicorn was to send in a young, virgin maiden. This would completely throw off the unicorn's defenses, causing it to lay its head in her lap. At this point, hunters would be able to move in and kill the beast.

Some European royalty and nobles owned unicorn horns that they treasured as highly as gold or precious gems. Many of these are likely rhino or narwhal horns, and it is believed that reports of unicorns were likely based on sightings of rhinos. 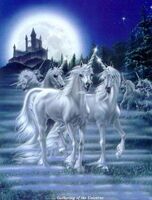 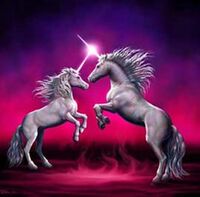 The nickname "saber-tooth" refers to the extreme length of their maxillary canines. Despite the colloquial name "saber-toothed tiger", Smilodon is not closely related to the tiger (or any other living felid); the latter belongs to subfamily Pantherinae, whereas Smilodon belongs to subfamily Machairodontinae. The name Smilodon comes from Greek: σμίλη, (smilē), "carving knife" + ὀδoύς (odoús), "tooth" (whose stem is odont-, as seen in the genitive case form ὀδόντος, odóntos).

The species of Smilodon in this fight will be the Smilodon fatalis. Smilodon fatalis, 1.6 million–10,000 years ago, replaced S. gracilis in North America and invaded western South America as part of the Great American Interchange. It ranged from 160 to 280 kg (350 to 620 lb). and reached a shoulder height of 100 cm (39 in) and body length of 175 cm (69 in). Sometimes two additional species are recognized, S. californicus and S. floridanus, but usually they are considered to be junior synonyms of S. fatalis. 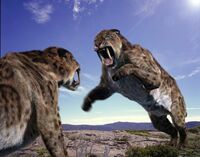 The battle will be a 1 on 1 and will take place in a field. Edges or a 2 paragraphs are required to count as a full vote. Votes with one word, sentence, or state no arguments will not count. Voting ends July 7th, 2013.

The Unicorn plodded through the field, the moon above shining upon her. She looked to the left and then to the right before bending down and taking a bite of some grass. Behind her, a Smilodon crept up ready for an attack.

Hearing the beast, the Unicorn quickly took off galloping away with the Smilodon behind her. The Smilodon gave chase. Sensing the Smilodon gaining on her, she stopped and lifted her back legs. Before he could realize his mistake, the Smilodon leapt at the Unicorn, but she smashed him with her hooves.

The Smilodon collapsed to the ground, his largest left tooth broken. The Unicorn turned and stomped its front hoof into the ground, preparing to charge. The Smilodon managed to stand, just in time to be skewered upon the Unicorn’s horn.

The Smilodon’s flesh was no defense as the horn easily went through its body, sticking out of the other side of the beast’s chest. The Smilodon roared momentarily in pain, before succumbing to blood loss. Bending down its head, the Unicorn allowed the Smilodon’s carcass to slide off of her horn.

Hearing movement in the nearby bushes, she took off to escape another potential battle.

The Unicorn was victorious over the Smilodon due to her longer ranged weaponry, superior strength, and combat experience.