King of Kings Round 1: Saladin vs Charlemagne

Saladin; legendary Muslim general, who became the first Sultan of Egypt and Syria!

Who is deadliest? To find out, our wikians are testing history's most lethal weapons. We'll see what happens when these warriors go toe-to-toe! No rules, no safety, no mercy. It's a duel to the death to decide who is the deadliest warrior!

Charlemagne (2 April 742 – 28 January 814), also known as Charles the Great (German: Karl der Große; Latin: Carolus or Karolus Magnus) or Charles I, was the King of the Franks from 768, the King of Italy from 774, and the first Roman Emperor in Western Europe since the collapse of the Western Roman Empire three centuries earlier.

The oldest son of Pepin the Short and Bertrada of Laon, Charlemagne became king in 768 following the death of his father. He was initially co-ruler with his brother Carloman I. Carloman's sudden death in 771 under unexplained circumstances left Charlemagne as the undisputed ruler of the Frankish Kingdom. Through his military conquests, he subdued the Saxons and the Bavarians and pushed his frontier into Spain. He expanded his kingdom into an empire that incorporated much of Western and Central Europe.

Ṣalāḥ ad-Dīn Yūsuf ibn Ayyūb (Arabic: صلاح الدين يوسف بن أيوب‎, Ṣalāḥ ad-Dīn Yūsuf ibn Ayyūb, Kurdish: سه‌لاحه‌دین ئه‌یوبی, Selah'edînê Eyubî) (c. 1138 – March 4, 1193), better known in the Western world as Saladin, was an Arabized Kurdish Muslim, who became the first Sultan of Egypt and Syria, and founded the Ayyubid dynasty. He led Muslim and Arab opposition to the Franks and other European Crusaders in the Levant. At the height of his power, his sultanate included Egypt, Syria, Mesopotamia, Kurdistan, Hejaz, and Yemen. Under his personal leadership, his forces defeated the Crusaders at the Battle of Hattin, leading the way to his re-capture of Palestine, which had been seized from the Fatimid Egyptians by the Crusaders 88 years earlier. Though the Crusader Kingdom of Jerusalem would continue to exist for a period, its defeat at Hattin marked a turning point in its conflict with the Muslims and Arabs. As such, Saladin is a prominent figure in Kurdish, Arab, and Muslim culture. Saladin was a strict adherent of Sunni Islam. His chivalrous behavior was noted by Christian chroniclers, especially in the accounts of the Siege of Kerak, and despite being the nemesis of the Crusaders, he won the respect of many of them, including Richard the Lionheart; rather than becoming a hated figure in Europe, he became a celebrated example of the principles of chivalry.

The battle will be a 4 on 4 and will take place on neautral terrain. Both sides will wear their respective armor and shields. Votes with one word, sentence, or state no arguments will not count. Proper grammar is required. Coping votes is not allowed. There is no horses, chariots, or other unlisted equipment in this battle.

In the dark of night, Saladin, the great Sultan of Egypt, sharpens his sword. He has been informed that the famed Sun Tzu had been captured by Suleiman. Clearly, Suleiman is the greatest threat, and thus should be his first target. Meanwhile, Saladin’s soldiers huddled around a fire, telling stories of some of the men they would be facing soon enough.

Charlemagne and his Frankish warriors slowly crept up to the camp. Charlemagne knew he had no real long range weaponry, thus an ambush at night was his best option. Upon seeing Saladin’s Saracen soldiers huddled around a fire, he gave a small smile. Surprise-and by the looks of it-God was on his side.

Charlemagne and another Frank both readied their Francisca axes, throwing them as accurately as they could in the darkness. Both axes hit the same soldier, one in his back and another in his head. The force of the two axes knocked the Saracen warrior into the fire, signaling the beginning of the battle.

As Saladin’s troops scrambled for weapons, the Frankish warriors charged. One of the Muslim warriors had secured a pike and skewered an oncoming Frank.

Another Frank sliced part of the pike’s pole with his longsword, removing the point from the weapon. The Saracen soldier quickly dropped the now useless pike and drew his talwar saber. The Frank sliced high, but the Saracen parried and counter slashed, leaving a large wound on the Frank’s cheek. Enraged, the Frankish warrior thrusted his longsword into the Saracen’s chest, penetrating his chainmail.

The next Saracen rushed forward and decapitated the Frank with a slice of his talwar. The final Frank soldier, with a roar of anger, charged only to succumb to the same fate as his companion.

Turning, the Saracen warrior was met with a boar spear strike to the gut.

Charlemagne released the weapon from his grasp and drew Joyeuse. Saladin emerged from his tent, saber in his right hand, and shield in his left. Charlemagne approached slowly, measuring Saladin’s every movement.

Saladin attacked first, slashing at Charlemagne’s throat. Charlemagne parried the strike and shoved Saladin back. He followed it up with a large overhead chop; however Saladin deflected the blow with his shield. Next, Saladin thrusted his saber into Charlemagne’s chest, however it failed to penetrate his chainmail. Shoving Saladin back a second time, Charlemagne attempted to decapitate the Sultan, however yet again Saladin blocked the strike with his shield. Before Charlemagne could counter, Saladin sliced the Frankish king’s throat, sending him to his knees coughing blood. With one more slice, Saladin removed the king’s head.

Saladin raised his talwar in the air, allowing the blade to glimmer in the moonlight before sheathing it and examining the battlefield. “Great victory…requires great sacrifice…”

The closest battle so far in the King of Kings tourney. Saladin wielded a better long range weapon, Charlemagne a better mid ranged weapon, and the two were pretty much tied in close range. What allowed Saladin to get the upper hand was his superior battlefield tactics-but just barely. 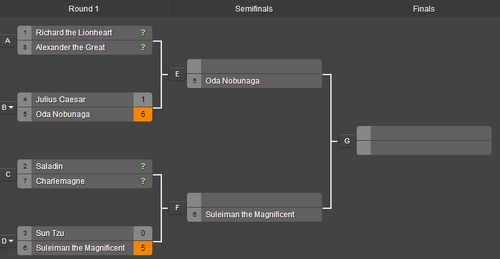 The winner of this battle will face Suleiman the Magnificent. After this battle and Alexander the Great vs Richard the Lionheart, I will do a break battle.