Two legends of the ancient world will resurrect from their respective myths to dual to decide the deadliest warrior. King Arthur, the high king of Britain who is though to have brought about the golden age of chivalry. This king is the greatest hero of British legend, but today he'll face the opponent that has been burnt into history as much as himself! Achilles, the hero of the Iliad who, instead of living a peaceful life as king of Phthia, decided to die a glorious death in the Trojan war to last throughout the ages! Both are killers of thousands, swordsmen of great skill, and master tacticians. But now will draw their blades against each other to decide which of them is..... 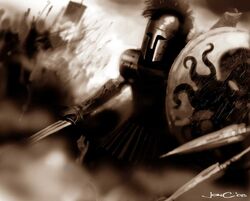 Achilles is the hero of the epic Greek poem The Iliad. Achilles is leader of the Myrmidons, a group of Greek highly trained warriors that fought alongside other Greek in the Trojan War. Achilles was extremely skilled in combat, killing thousands of men during his time in Troy. In fact, the only way he was killed was when he was shot at from a distance. This proves how incredibly skilled Achilles was in combat. This version will be the one that CAN be killed other ways than his heel. 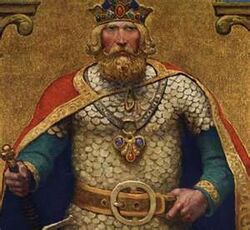 Achilles will have left the Trojan War, contrary to what the gods had expected. They send Achilles northward, into the undiscovered kingdom of Arthur. When the Myrmidons all land on the beach, an army led by King Arthur will be there to meet them. Achilles and Arthur will fight in single combat to determine the fates of the two different armies.

Sing, O Muses, of the final voyage of Achilles

Strong he rose, and prepared for bloodlust, Achilles stood in his glamor

The inner city of Troy was laiden with death,

The echoes of the crows and ravens echoing through the city.

The blessing of Ares shone radiant from his armor,

And stronger than the steeds of Zeus' chariot.

The bloodthirsty warlord glared at the dogs before him.

"Go forth, my comrades! Let us fill the Underworld with their corpses!"

The loyal death bringers of Achilles stood, clad in bronze and iron

Armed with spear and shield and sling and bow.

The final men of Troy held firm, but none stood a match for his sword and spear

And bone with flesh and blood fell to the dusty floors,

And his spear was crimson with blood, and his armor was golden no more.

"No mortal man shall stand to my sword, and those that do shall join Hades!"

Achilles returned to his foes, dropping his spear and sword,

His strength alone brought death to the field, and men began the journey to the Underworld.

When the Trojan dogs lay dead on the floor

And their bodies cold as stone, Achilles roared the to cheering Myrmidons;

"Where is an opponent worthy enough for my blade? WHERE!"

He beckoned forth any Trojan to dare come forth,

To feel the wrath of his rage.

But the man he wished for came not from the city before him,

Instead, he lived in the land beyond the gods.

Arthur, the king of Camelot, was the man whom he begged.

Arthur, son of Uther Pendragon, stood upon his throne,

Excalibur by his side.

He had heard of a bane of the south

Who's blade had brought thousands to their grave.

The name was whispered in fear,

Panic twas in their voice.

Arthur had not worried about this monster of a man,

And never dreaded the day he would come.

But, alas! His squire had proved him wrong.

An armada as far as the mortal eye could see

Was heading to their beaches.

The flag of Pthia flew high in the winds

And the sun glared from their golden armor.

The man who had been whipsered in terror

The one who has filled the Earth with corpses.

This man was coming to the shores of Camelot,

Arthur rode began the voyage, prepared for death itself.

As he stood with his knights and men, eager and nervous for their enemies,

Arthur rode through their ranks, yelling with such strength and courage;

"My fellow men and friends, today we will enter a battle.

A battle that may even be our last.

But know this! I have faith in our dear Lord

That we will stop this monster among men!

Mordred and Morgan le Faye, the Saxons and Romans,

We have stood to fight these threats, and we have triumphed!

And I know we shall do so once more!"

His men gave a loud cheer, bellowing his name,

And they had the faith in their king.

Achilles, the bane of Troy, would come to Camelot by the morrow.

But he would not survive to see the end of that wretched day.

Achilles stood at the helm, his voice loud with as the thunder itself,

"Behold, my great Myrmidons! Gather your strength and go onward!"

The Myrmidons yelled heartily, and onward they went.

The wrath of Posideon bellowed at them,

His trident casting waves the size of moutains.

Zeus cast thunder and lightning around them,

His anger at the warlord unmatched.

"You wish for a challenge, oh Achilles! A man worthy for your blade?"

Know this, your rage and anger will send you not to only an opponent worthy

But one better than your blade!

You may see clear skies and calm beaches,

But you know not what awaits you.

A king clad in iron, and his sword stronger than stone.

You shall meet this man, and know this;

Your corpse shall be no more than a shell

And the curse you bring onto our land shall be no more!"

Achilles heard not the threat of Zeus,

Nor did he care.

Instead, he mustered the strength to proceed through the maelstorm of the gods

And to Camelot, where the opponent he yearned for

The foe he praised the gods for,

Twas waiting for him.

Achilles left the ship, the sand shifting beneath him.

Before him stood an army, clad in iron and silver.

His felt rage rise from his heart, black as the night

And his eyes shone flames of the sun itself.

He got into his chariot, great spear and shield in hand.

"Send forth your greatest warrior forward

And watch his blood spill upon the Earth!

Show yourself, so that I may show that I,

Achilles, truly am the greatest warrior!"

Listening to him rant utop the odd vehicle.

Suddenly, an arrow sharp as a sword flew

Whistling in the air.

It thudded into the chariot, breaking into several splinters.

Achilles spun around at it's direction,

Utter outrage arose from within, and he roared at the man before him.

Arthur walked onto the field once more, an arrow nocked again.

"Let us settle this like true men, o slayer of Troy.

Whoever proves the better warrior shall live to see the morrow."

Achilles stepped down from his chariot, and took javelin in hand.

"So be it foolish one, you alone shall fall to my blade!"

Achiles jogged at Arthur, his mighty spear in hand.

Yet Arthur held firm as stone as he nocked another arrow,

"Lord, permit upon this day the strength to kill a monster

And end his sinful days."

With those words to our Lord, and courage in his heart,

He let the arrow fly, it whistled in the air.

But Achilles ducked to the ground, the point meeting nothing but sand.

The Greek monster laughed in outrage as he slung forth one hefty spear,

And Arthur, oh brave Arthur, charged forth with Excalibur.

Achilles thrust his great spear, but Arthur dodged once more.

A feint and a recovery, a thrust and a parry, a chop and a block,

The two titans dualed as lions would, ferocious were their blades.

Achilles made one final sweep, his spear tripping Arthur to the ground.

He yelled in his glory, his hand held high in triumph,

"Upon this day be it known, that Achilles is the greatest of them all."

Arthur stood, though weakened by the blow, and hefted Excalibur back into his hands.

"Know this you monster of  man, the battle has not been done!"

With victory in sight and his opponent left in a lustful daze,

Arthur swung Excalibur, clashing against his back.

And oh, behold the gods, the golden armor snapped like bark,

And Achilles turned once more, bewildered and in shock.

"This cannot be! The gods would not allow!

This armor is stronger than any iron, forged from the gods themselves!"

But Arthur swung Excalibur, his face as cold as steel

Achilles was swept upon the ground, his foot split in two.

'Alas, this cannot be! I am a machine of the gods, a bringer of death!"

"And this is why you shall fall!!" With those final words, Arthur ended their dual.

Raising the head of Achilles high, to cheers of his roraing knights,

"Behold, oh Myrmidons, the head of Achilles the Greek!

Spread througout the land the the bane of Troy is dead!"

The reason everyone backed Arthur were for a number of reasons, first and foremost because he was wielding much more powerful weapons against Achilles. While his rage and skill were formidable, Achilles did not posses the weapons or armor to defeat the high King of Briton.