In the rubble of a mansion in DFederal's One Percenter district, Number Five nervously runs a hand through his hair at the disaster around him. "Just tell me if you can do it, Five." Elijah sternly asks, his hand weakly applying pressure to his side. Five throws up his hands in frustration.

"I don't know Elijah!" Five yells back, slamming his fist into a bookshelf. As Five and Elijah consider their options, loud singing pierces through the icy barricade Elijah had set up over his library door. Two quick thumps come from the other side, and the ice begins to shatter. "The science of time travel...it's tricky, you know? I barely even had a grasp in it back in my universe, let alone this one. Besides, the users could easily stop me from-"

Five's explanation is cut short as the last of the ice collapses, and Elijah hastily launches a flurry of icicles in its direction. The clash of ice and steel crashes as Cutthroat steps into the room, humming a tune. He responds by throwing his knife at Elijah, which he barely deflects with a blast of ice. The serial killer, red and black button the only color on his all-white ensemble, smiles and pulls out two pieces of cloth. "Which one is better? I do so love this red tie, even if it reeks of smoke, but this blue one was a gift from that beautiful red head! Oh I don't know which is my favorite!"

Elijah and Five growl at Cutthroat, who draws another knife, a strange green glow emanating from himself. Elijah tries to create another ice blast, only for his hands to produce a weak puff of snow. He turns to Five, panic and anger in his eyes. "Just do it, Five." With that final order, Elijah picks up Cutthroat's thrown knife and charges.

Five turns around, a blue energy forming around his hands, before a similarly colored portal spawns in front of him. He looks behind him briefly, watching as Cutthroat easily stabs through Elijah's chest, his hand and knife reaching through Elijah's back and waving at Five. He ruefully spits at Cutthroat, before jumping into the portal.

Cutthroat frowns in disappointment, pulling his hand and knife out of Elijah's body. He looks down in excitement as the blood drips down the blade, before a sharp beeping captures his attention. He looks at the phone, and sees a single sentence. Is it done? Cutthroat types back a quick reply of the situation, and a large red portal forms in front of him. Another beep goes off, with the message Finish the job. accompanying it.

Gleefully sheathing his knife and pocketing the phone, Cutthroat enters the portal, following Five back in time. 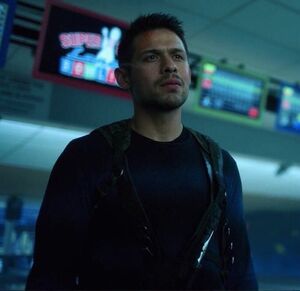 The second recruit of the Umbrella Academy, Diego proved to be the most rebellious of the Umbrella Academy, being the first to leave the group when he became an adult. He attempted to become a police officer and, when that failed, turned to vigilantism. He ended up becoming partners, briefly romantically, with Eudora Patch, a police officer. When Hargreaves died, Diego reunited with his siblings only to immediately leave again after the funeral. Diego didn't truly rejoin his siblings until he learned that Patch was killed by the same assassins sent to kill his time-travelling brother Five. Diego and the others attempt to stop the apocalypse, but only end up causing it by provoking their sister Vanya. Five decides to time travel once again, with Diego and the others, to try to stop the apocalypse together.

Five's attempt to time travel result in the Academy members being thrown in different points in time, with Diego arriving in September 1, 1963 in Dallas, Texas. He becomes convinced that he is meant to stop the assassination of John F. Kennedy, and is committed to an insane asylum when he attempts to kill Lee Harvey Oswald. In the asylum he meets Lila Pitts, who becomes his confidant and briefly lover as they plan their escape. Diego reunites with the rest of the Academy, where Five explains that yet another apocalypse has been set in motion. Diego eventually discovers that Lila is the daughter of the Handler, and she attempts to recruit him to the Commission. While at their headquarters, he discovers the cause of the apocalypse is Vanya once again. He, his sister Allison, and brothers Ben and Klaus stop Vanya before she destroys an FBI facility, but fails to save Kennedy and is believed to be an accomplice in the assassination. He and the rest of the Umbrella Academy then go to Vanya's lover's farm, where Lila and the rest of the Commission arrive to murder them. He manages to talk Lila down, letting her escape into the timestream, before he and the rest of the Academy travel to an alternate future where Hargreaves recruited an alternate lineup for the Sparrow Academy. 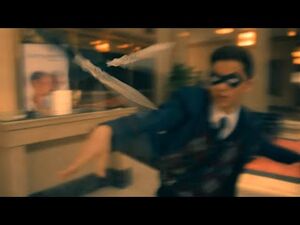 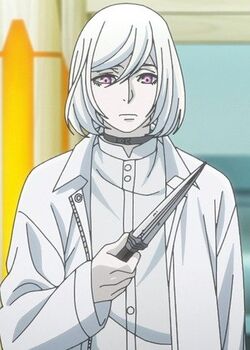 A ruthless serial killer operating in Kansai, Cutthroat was seemingly hired to be caught by the law enforcement of the region. On the day of his execution, multiple Akudama are hired to stage his rescue, with Swindler and Hoodlum accidentally getting caught in the mix. All the Akudama succeed in reaching Cutthroat, who escapes his binds and kills his captors. He then completes his part of the mission, placing bombs on himself and his fellow Akudama. The group then discovers their benefactor; Black Cat, who offers them a reward to retrieve an object from the train heading towards Kanto. Cutthroat agrees, taking an immediate liking to Swindler, and vows to protect her above all else.

After the completion of the heist, where Black Cat is revealed to be an A.I. controlled by two immortal children, the Akudama escort the children to a remote rocket facility in Kansai. The group are betrayed by Doctor, with Cutthroat getting lost in the chaos. He ends up finding his way back to Swindler and Sister, killing anyone he finds on his way, and reveals the source of his fascination with Swindler; his illusion of a grand red halo above her head, with his desire to kill her growing as it has grown. Cutthroat begins to pursue Swindler, but he is tricked by her and killed when she ambushes him and stabs him with a stolen jutte. 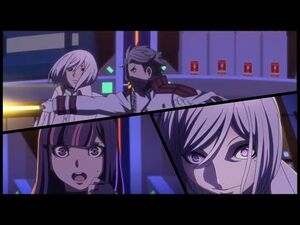 Diego's father instituted an intense and rigorous training regime, with Diego spending all of his time not spent crimefighting in physical training, education, or experimenting with his powers. In addition to the Hargreaves training, Diego underwent basic training at the police academy and the orientation of the Commission, although both institutions offered Diego very little that he didn't already know. Cutthroat's entire backstory is a mystery, but it is unlikely he was trained professionally due to the general conditions of Kansai's public. However, he is also clearly skilled in knifefighting, so he does have some talent that has been honed.

Diego's time in the Umbrella Academy saw him take on multiple low-scale threats, such as bank robbers or the occasional terrorist cell, but the actual history of the Academy is more implied than explicitly shown. His time as his own independent vigilante saw him take on street-level criminals on a regular basis, while when he reunited with his siblings he faced off against multiple time-travelling assassins and other superhumans like Lila. Cutthroat's history prior to the Kansai heist are unknown, but it's known that he's been active as a serial killer for a prolonged period of time, with his kill count reaching into the thousands before the heist. When he teamed up with the rest of the Akudama, Cutthroat fought against the Executioners, a highly trained and dangerous group of super-cops, dispatching most of them with ease.

Diego has honed his body to its physical peak, but he's also definitively human. He's shown to be easily winded by superhumans like Luther and Hazel, relying on his skill to compete with them in a physical confrontation. He's still stronger than other humans, like the Swedes, but ultimately he's been shown to not reach beyond that. Cutthroat's durability and speed make him a monster on the battlefield, effortlessly dispatching trained people in the blink of an eye. He shrugs off most fatal wounds without so much as a groan, and he powers through otherwise fatal wounds without question.

Diego's temper and arrogance make him a hot-headed fighter, and there have been moments he's allowed his emotions to blind him to the obvious threat. He throws himself into fights he doesn't stand a chance of winning, such as provoking Luther at their father's funeral or his relentless quest to stop the Kennedy assassination, but does commit himself to a fight once he gets into one. Cutthroat's general personality means he's easily distracted by the color red and whatever may catch his attention, but nothing stops him from his love of killing. He commits fully to killing whoever he wants, and whatever methods are required that lets him kill the most people.