It's an old school classic of cops and robbers, with an animal twist as these two feisty beasts do battle! Sly Cooper, the newest member of the infamous Cooper Clan, who sought to renew his family's place in history as the best thieves in the business! Perry the Platypus, the semi-aquatic egg-laying mammal of action, who constantly trades blows and wits with Dr. Doofenshmirtz to defend the tri-state area! It's wit and stealth against skill and dedication as these two warriors trade blows for the ultimate prize. When the dust settles and they leave to lick their wounds, only one can be... 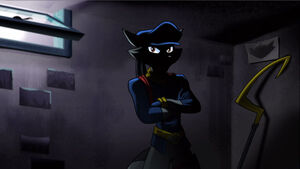 Hailing from a line of legendary thieves that date back as far as recorded history can follow, Sly Cooper is the modern incarnation of a legacy of a shadowy master criminal bloodline. As a young child, a group of villainous warriors named the Fiendish Five attacked and murdered his father in front of him- stealing a prized artifact from the Cooper family in the process; a book that recorded the secrets of every Cooper ancestor, known as the Thievius Raccoonus. Sly was sent to an orphanage, where he encountered his lifelong friends Murray, a super strong hippo, and Bentley, a genius turtle. Becoming the modern Cooper clan, the three joined forces to defeat the five and reunite the pages of the Raccoonus. The leader of the Fiendish Five was an ancient robotic Owl named Clockwerk, who had hunted the Cooper Clan throughout generations out of pure, unrelenting hate. Cooper was able to defeat the Owl mastermind with the help of Inspector Carmelita Fox, as well as stop Interpol agent Neyla from using Clockwerk's remains to take over the world, protecting his family's secrets from Dr. M, and travel through time to protect his family's legacy. 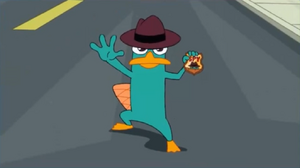 The top secret agent of the prestigious O.W.C.A., Perry the Platypus is the pet platypus of neighborhood child geniuses Phineas Flynn and Ferb Fletcher. Adopted by the two brothers from an O.W.C.A. pet store, Perry the Platypus spends most of his days thwarting the plans of Dr. Heinz Doofenshmirtz. Perry serves under direct supervision of Major Monogram, acting as his top field agent. Perry was also instrumental in defeating the rogue agent Dennis the Rabbit, a mercenary for hire who infiltrated the agency. Perry's conflicts with Dofenshmirtz usually result in enough destruction and chaos to cover for his owners' inventions. Despite their conflicted relationship, Perry the Platypus and Doofenshmirtz start to see each other as friends, and their fights rarely break into truly dangerous and sinister territory. Perry has reached out to Doofenshmirtz on multiple occasions to help the mad scientist, including to mend his relationship with his daughter Vanessa and keep more severe villains like the Regurgitator from occupying the Tri-State Area.

Neither of these warriors has a particularly vicious streak in them. Sly Cooper's lack of firepower require that he emphasize stealth and subtlety, which often means he tries not to get into fights at all - not that he'd want to either, given his general desire to avoid killing. However, the nature of his job as a thief means he's got to get his hands dirty, and he's perfectly willing to knock someone out or break some bones in a pinch. Perry the Platypus doesn't kill - ever. He rarely does enough damage to permanently subdue his arch-enemy Dr. Doofenshmirtz, often saving him whenever he has to.

Sly Cooper, unlike his ancestors and father, didn't get the luxury of learning the tools of the trade from his family or even from the Thievius Raccoonus. By the time that Sly Cooper really begins his criminal career, he's had to rely a lot on self-training and experience to be his teacher. This changes as he gathers more pages of the totem and time travels to meet his ancestors, but even then he rarely spends a dedicated portion of time to training with them before his adventures drag him away. Perry the Platypus' training has never been explicitly clear, but his skills and the equipment he uses makes it clear he's spent some time with professionals. He can pilot vehicles, is a highly skilled martial artist, and is capable of using the complicated pieces of machinery that the O.W.C.A. gives him. Just by virtue of the O.W.C.A. being a professional and (apparently) well-funded organization, Perry's got a slight leg up when it comes to formal training.

While Bentley is the primary brains behind the operation, Sly Cooper is hardly a slouch when it comes to thinking. He regularly comes up with decisive and key plans for how the heists go, and he's capable of keeping up with Bentley on all fronts except the specific technobabble. Perry's not a fool either, but there have been consistent occasions where he falls into relatively easy traps. He escapes them with just as much ease, but the fact that he often falls for them in the first place is quite damning in regards to his ability to think critically outside of a jam.

As a thief, Sly Cooper's capable of coming up with inventive strategies on the fly and thinking his way out of problems. He's capable of using the environment to his advantage, and regularly relies on his wits to keep ahead of his often much larger and stronger opponents. Perry gets a slight edge here, given the general goofiness of Doofenshmirtz' inventions and traps, so Perry often has to use unconventional means to win and escape from his clutches. He's gotten involved in some truly unique and strange adventures of his career, so he's slightly more capable of devising a quick, last-minute strategy.

Perry the Platypus and the O.W.C.A. have been keeping track of a string of high-stakes, lavish heists in the tri-state area. After a long investigation, Perry and the O.W.C.A. have cracked down that the location of the next target, a rare jewel in the Tri-State Museum of Wonders. Sly Cooper, the thief responsible for these heists, will be mid-infiltration when Perry the Platypus interrupts him. A fight ensues for the ownership of the jewel.

The win conditions are the following:

Pushing his round glasses up back to his eyes, Bentley took a glance at one of the ten computer monitors in front of him. As he observed the security cameras of the Tri-State Museum of Wonders, a loud bang interrupted his train of thought.

"Murray, could ya keep it quiet over there? I'm trying to find a good place for Sly to get inside!"

His burly hippo companion Murray gave a meek "Sorry" as he shifted into a more comfortable position, a fresh plate of steaming hot nachos. The hippo strained to look over Bentley's shoulder, causing Bentley to temporarily recoil at the smell of his friend's breath.

"Do you have to eat in here? Right now?"

A familiar voice cuts into their conversation. "As long as he saves some for me, Murray can eat as much as he likes."

On the roof of the museum, Sly Cooper carefully lifts the panel of a glass skylight with his cane. Pulling his night vision goggles to his eyes, he scans the darkened room below for any guards. "He's our muscle after all- can't have him getting any weaker."

Spotting one, he fully lifts the panel up and gracefully jumps He pulls the string of his parachute, gliding down to the ground.

Quickly darting to the nearby shadows, he watches as the lone guard walks by him. "You're good to go, Sly," Bentley's voice whispers in his ear, and the master thief chuckles. He jumps forward, swinging his cane down on the guard's head. In one fell swoop, the guard collapses, unconscious from the blow.

"Easy as can be..." Sly says, twirling his cane as he lifts the keys from the guard's belt.

Walking over to the locked door of the main gallery, Sly jiggles the keys into place before entering the room. In a glass case, surrounded with lasers inside, stood the Uncut Opal. The entire color spectrum exposed in small purple chunks, all surrounded by an otherwise tame and dull grey stone. Worth millions upon millions.

Eagerly rubbing his hands together, Sly waited for Bentley's voice to give him the signal. "Any day now, Bentley."

The lasers within the glass case shut off, and a small ding gave away the motion sensor deactivating. Feeling his way around the pedestal's base, Sly smirked as he felt a button. Pressing it, the glass walls slowly opened.

Suddenly, the lights kick on in the room. The thief looked upon in confusion as an alarm started blaring, and he could hear the heavy thud of approaching feet. He grabs the jewel and sprints out of the room.

"Bentley, I need an escape plan right away."

As he re-enters the room he arrived in, a brown shape flies toward him. Sly rolls to the side, cane in hand, as a fedora sails past his head. To his confusion, it turns around and returns to the hands of its owner; Perry the Platypus.

"A platypus with a fedora?" Sly asks, eyes scanning for any way out.

Perry the Platypus rolls his eyes, before putting the fedora on his head and pulling out his badge.

"Agent P...O.W.C.A...blah blah blah." Sly says, smirking. "If a certain lovely fox couldn't ever catch me, what chance do you have?'

Perry just purrs in response before taking a fighting stance. Sly shrugs, hoisting his cane in hand. "Any day now Bentley - things are getting weird."

Retrieved from "https://deadliestfiction.fandom.com/wiki/User_blog:Cfp3157/Death_to_Your_Childhood:_Sly_Cooper_vs._Perry_the_Platypus?oldid=342165"
Community content is available under CC-BY-SA unless otherwise noted.