There are no names more influential in the realm of the fantasy genre than J.R.R. Tolkien and C.S. Lewis. They revolutionized speculative fiction through their love for mythology and religion. And while both were great friends in real-life, today we'll be pitting two of their greatest creations.

Both these fantasy villains wanted to conquer everything! They went on campaigns to take over whole magical continents, and fought against beings who could practically resurrect themselves. The only difference? One's rocking black while the other cold white! Who is deadliest?! 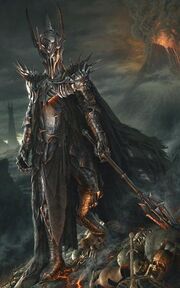 Sauron was a Maia named Mairon, who was soon ensnared by Melkor, also called Morgoth. Renamed Sauron, he convinced men to worship Morgoth as a god. Sauron served as Morgoth's chief lieutenant when the Noldorin Elves left the Blessed Realm of Valinor in the Utter West (against the counsel of the Valar) in order to wage war on Morgoth. The outcome was a victory for Sauron.

After a thousand years, Sauron forged the One Ring in Mount Doom to rule the other rings, investing most of his own power into the Ring as he forged it, becoming the Dark Lord of Mordor. A few Years later, He found the Hobbits Bilbo and his nephew, Frodo had the ring. After finding out that Aragorn was in Allience with Frodo and other members of the ring bearers.

Thinking Aragorn carried the ring, he sent an army commanded by the Witch-king of Angmar to overthrow Minas Tirith in the Battle of the Pelennor Fields. Unfortunately for Sauron, the battle ended in a crushing defeat. Things started to look bad when Frodo, who was given the job to destroy the ring was tempted to put it on. Luckily for Frodo, Gollum, the Original Owner of the Ring, came to retrieve it. However, as he grabbed it, He slipped and fell into a pit of lava along with the ring. Because the ring was destroyed, Sauron was finally finished and never rose again. 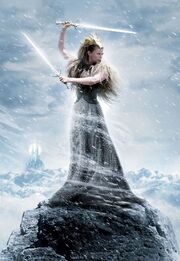 Jadis was the sole surviving resident and the self-declared final Queen of Charn. She was an extremely powerful sorceress, and was once the most infamous ruler of Narnia. Jadis was born into the royal family of the world of Charn, who were said to be part-Jinn and part-Giant. Very little is known about her childhood or early adult life. It was known, however, that she had practiced witchcraft in her own world, and delved into dark magic, far beyond what was considered proper.

She was accidentally brought to the World of Narnia on the day of its creation by British children named Digory Kirke and Polly Plummer. Although she was banished to the North by the Great Lion, Aslan, she returned 900 Narnian-years later, and usurped the throne from the original royal family of Narnia. As a curse upon her Narnian subjects, she began the Long Winter, magically forcing Narnia into a hundred-year state of frozen snow and ice, which lasted all through her reign, thus earning her the title, the "White Witch".

She established the first Narnian Secret Police, and built herself a palace. She abolished any judicial system, merely punishing all of her political enemies by turning them into stone. Her tyranny eventually forced the return of Aslan, prompting the Narnians into a triumphant uprising known as the Winter Revolution. Her fall came from the paws of Aslan who slew her.

Feel free to choose which characters scores higher when it comes to two major x-factors:

The Dark Lord is known in Middle Earth legend for his black tongue. Many elves and even supernatural beings like him have fallen for his cunning. He is good when it comes to manipulation, as seen when he deceived the Elves of Middle-Earth numerous times in the second age (especially the Noldorin smiths in Eregion). After being taken prisoner by Ar-Pharazôn, Sauron was quickly able to become a powerful advisor to the king and eventually the de facto ruler of Númenor. The White Witch on the other hand, has her own feats of intelligence, particularly in the academe, where in a short period of time she managed to master Charn magic, and Narnia magic during her first steps there. She was smart enough to trick and use Edmund as leverage, though she still ended up being duped by Aslan.

Both characters have lived for centuries, and have their fair share of both single combat and battles. Jadis's first taste of war happened during her conflict with her sister that ended with her planet being decimated. When she arrived at Narnia, she wasted no time conquering the Northern Lands and eventually Narnia as a whole. She's also led campaigns against neighboring countries like Calormen. Sauron meanwhile, fought against smaller threats like elves, humans and dwarves, to large powerhouses like the Valar and even Ilúvatar itself. Sauron's career might have started during Morgoth's wars against the forces of Tolkas, but his greatest battles happened in second and third age. His greatest feat include defeating the powerful Elf-lord Finrod in a magical duel.