As Comic-Con fast approaches, I thought of making a comic book-style battle between B-list characters from Marvel and DC. It's the age-old debate of which of these two companies... I mean characters... are deadliest!

Only one can be crowned... the DEADLIEST WARRIOR!

Death Adder was born Roland Burroughs in Rochester, New York. He started his life of crime as a small-time thug under the Roxxon Oil Company, participating in a covert operation to retrieve the powerful Serpent Crown from the Atlantic Ocean. At Roxxon's Mutagenic Laboratory, Roland was surgically given gills and a bionic tail, as well as poison-tipped claws, to help him in his endeavors. An accident happened during this process which rendered Death Adder mute. During that time, he would become a member of a snake-themed gang called the Serpent Squad (later renamed Serpent Society). As one of the deadliest members of the Society, the mute Death Adder excelled as an assassin. Feared by even his own teammates, the silent killer carried out his missions with fierce dedication, gaining their admiration. He died at least four times during his career, only to be ressurected constantly by those who wanted to hire him. 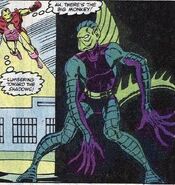 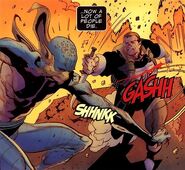 Death Adder vs the Punisher

Martin "Boogie" Berger was born to a relatively privileged upbringing under his mother, Nurse Berger. However, he would be embroiled in trouble at a young age, before his life was forever changed by the event known as the "Big Bang". On that night, Boogie was present in the largest gang war ever seen in Dakota City, presumably as a member or an affiliate of one of the white gangs (probably the white supremacist "Sons of Odin"). Unknown to them, the war was a set-up, and the police launched an experimental tear gas in the hopes of capturing all of the criminals present. The tear gas unexpectedly started mutating those who were present. The event had given Berger superpowers and a new view of life. Wanting to make a change, he would join the multicultural vigilante gang known as the Blood Syndicate, becoming its first and only Caucasian member. At first, he tried to hide his race for fear of prejudice, but eventually the Syndicate accepted him as their own. Berger took the name of Boogieman and fought with his new comrades against criminal organizations, law enforcement, and other superhumans. 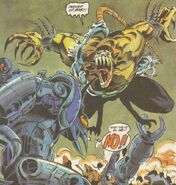 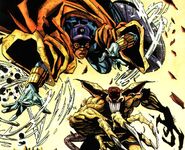 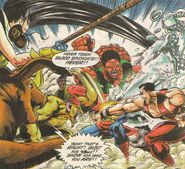 "You going down, homie! Do you understand?!" a large yellow humanoid rat by the name of the Boogieman yelled. "You come in here to our territory and try to take out one of my friends?! I don't know if you're brave or just stupid!"

In front of him was an armored snake-like man with a white monstrous break, long talons, and a green tail. This assassin, known only as Death Adder, said nothing as he continued to stare unfazed at the wannabe superhero. They were both inside a dark sewer; the smell of it putrid and a green river of soapy water running through.

"You think you're tough because you stay silent. Well, listen here freak! You ain't so tough! I ain't scared of you!" Boogieman added, appearing a bit desperate. But the snakeman continued to stay silent and immobile; his chest forward and arms down, unconcerned and uncaring of this small threat.

"Y-You do understand me, right?" asked the Boogieman. But before he could get an answer, Death Adder suddenly disappeared from his sight. He just vanished in thin air, becoming a blur, all of it happening in a miniscule of a second. A green scale limb then wrapped around Boogieman's neck, lifting him up and smashing him on the ground. It then began to squeeze his neck with superhuman strength. As Boogieman struggled, he saw Death Adder's sinister eyes, his tail wrapped around his throat.

The humanoid rat's claws then shredded Death Adder's tail, making the latter throw the former away like a ragdoll. Enraged, Death Adder then charged towards the downed Boogieman, his claws drawn like sabers. He swiped, slashing the Boogieman in the chest. The Boogieman yelled in pain before scratching Death Adder in the face, though his claws made little damage against the villain's armored hide. Undeterred, Boogieman followed up by biting Death Adder's shoulder with all his might, crunching armor and bone. Death Adder then replied by grabbing Boogieman and chucking him away again.

The Boogieman spat and jeered, "You ain't so tough!"

Without a second thought, Death Adder charged again. As Boogieman swiped at him with his claws, Death Adder slid to the ground and tripped the humanoid rat with his tail. As the two laid down, Death Adder raised his talons and plunged it to Boogieman's stomach, making him yell in pain. Boogieman retaliated by kicking Death Adder in the face, sending him away.

Strange. Death Adder could swear this was the second time he had tagged his prey. Yet his poison seemed to do little; his quarry still continued to breath and fight. Boogieman, on the other hand, could feel the burning sensation in his wounds, though he knew that with time he would get through. However, this snake guy was getting really annoying.

"Let's get this over with, asshole! Come on! I still got some video games I need to play!"

As Boogieman lunged at Death Adder, the snake man then dived into the water. Boogieman landed and looked around, trying to find where his opponent went. He dipped his feet into the water, trying to sense where his opponent was. Suddenly, like a crocodile out of a National Geographic documentary, Death Adder burst out of the water, his jaws and claws open. Boogieman managed to sense his attack, and thus dropped to the ground on his back, before catching Death Adder's shoulders with his feet. He then kicked Death Adder to the ceiling before the body of the snake fell heavily on the ground.

Death Adder remained disoriented by the attack. As his vision slowly came back and his head stopped spinning, he saw a rat staring at him. He ignored it at first to search for Boogieman but he noticed that he was now surrounded with more vermin. Boogieman dropped in front of him and laughed, saying, "Welcome to the family!"

The vermin, numbering in the hundreds, threw themselves at Death Adder. Although the assassin managed to swipe a few away, soon the tidal wave of rats began to drown him. Boogieman controlled the rats very well; the gang affiliate making sure his enemy would not be escaping this one. Death Adder squirmed and squealed, desperately trying to get the rats off as they began to munch on his flesh.

To put Death Adder out of his misery, the rat-themed superhero did a coup de grace, snapping Death Adder's neck with a stomp. "Damn..." Boogieman remarked after feeling how easily breakable his bones were. The guy really was not that tough, and the superhero walked away triumphant.

Boogieman won because he was more accustomed to fighting tougher enemies that him, as well as having the better set of powers. Although deadly, Death Adder's inconsistent ability to poison, combined with his losing streak against non-super powered hero, led to his defeat.