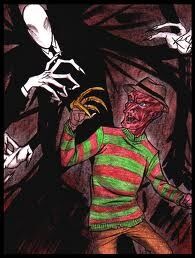 Slender Man, The feared hunter of children who's very origins are unknown to all!

Freddy Krueger, The pediphile murdered by vengeful parents who now hunts his killers children in their sleep!

Bio: Slender Man (also known as The Operator) is the antagonist of the Slender Man Mythos, in this particular case, the antagonist of Marble Hornets. He (or it) is shown to be extremely persistent in its pursuit of Alex Kraite and his friend Jay as they chronicle it's pursuit of and attempts to mentally break them. It's previous victim, Toteheark, now works as its personal minion, suggesting an ability to seize control of its targets minds.

Telekinesis: SlenderMan man shows the ability to move things with its mind, as evidenced in one of the series entries when it threw Jay back 30 feet without touching him and another when it moved Alex's camera while he slept so he could see what attacked him.

Telepathic Attacks: SlenderMan is shown to be capable of filling the targets vision with static, making their nose bleed, and filling their head with pain. It's implied that continuous mental attack breaks a target mentally and makes them into a proxy.

Teleportation: SlenderMan is widely feared to due to the apparent inability to escape it as it basically teleports to wherever it wants to be. There is little warning for when it does this, as it just appears there.

Bio: Freddy Krueger, when he was alive, was either a pedophile, a child killer, or both. It's not entirely certain. No matter what happened, a mob of angry parents chased him to his home and burnt it down, presumably killing him. However, the children of these began to have nightmares about Freddy chasing them, and in some cases, Freddy caught and killed them. He had returned to take his vengeance.

Glove: Freddy wears a clawed glove with butcher knives strapped to the fingers.

Hellfire: Freddy is capable of lighting fire to his targets with a wave if his hand.

Teleportation: Like Slender, Freddy can teleport in a flash of hellfire and a sinister laugh. However, it's less stealthy and more flashy.

It will be set in the woods from Slender.

Image courtesy of Cageyshick05 on Deviantart.

We see very blurry footage as Alex runs away from a man in a red sweater. Suddenly, the man vanishes in a puff of fire. Alex stops and looks around confused, when suddenly, the man, now revealed to have a horribly burnt face appears in front of Alex, chuckles and says,"Gotcha!". Suddenly, the audio cuts and the video gets scratchy as the man goes flying.

"Now I'm pissed!" The Man says as he gets up and looks around, unaware of the faceless figure in a suit standing behind him. Suddenly, the man says,"One...two...looks like I found!" The man whips around and claws at the empty air. "Hey! Punk! The only around here supposed to be doing the killing is me!" He roared as Alex crawled behind a tree, all the while filming the battle of these two demonic warriors.'

Freddy walks closer towards Alex as he ominously chuckles and scrapes his bladed fingers together menacingly. The audio clips and static kicks in as the video becomes distorted. All that can be seen is the Slender Man bringing Freddy to his knees as he tries to light fire to him. Freddy lets out a cry of pain as his jerks around and his arms spread out. Freddy slumps over, seemingly dead, and rises to the ground with a dead look in his eyes.

At that point, Alex got up and ran away. I don't blame him, but wherever he is, I need to talk to him so he can tell me just what is going on.

Slenderman won due to his far more powerful and less flashy attacks, not to mention his more calm, reserved, manner of attacking.