Tonight on Deadliest Fiction, we bring you a brutal, no holds barred fight to the death between two super-strong, armored sword wielders that strike fear into the hearts of their enemies! Prepare yourselves for a showdown as Guts, the infamous Black Swordsman and renowned Apostle slayer, crosses blades with Striga, the fearsome vampire general and muscle of the Council of Sisters! It'll be a vicious struggle where we compare their weapons, skills, and abilities to determine the answer to the ultimate question... 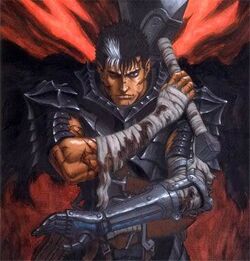 Born from the corpse of a lynched woman, Guts was a sickly infant adopted by Shisu, lover of the mercenary Gambino, who allowed her to keep the infant despite the bad omen around him. Shisu would die three years later to the plague, leaving the young Guts in the care of Gambino, who proved to be a poor parent figure. From a young age, Guts would be trained vigorously in the art of combat and swordsmanship and eventually began aiding Gambino's mercenary company in combat, proving himself as a talented fighter. Gambino, however, deeply resented Guts and blamed him for Shisu's death, a loathing that would culminate in him allowing Donavan, a fellow mercenary, to rape the boy in his tent. Traumatized, Guts secretly murdered Donavan during the company's next battle, haunted by the man's claims that Gambino sold him for a night. The relationship with his father figure worsened after Gambino lost his leg, and ultimately ended when Gambino drunkenly attempted to murder him, forcing Guts to kill him in self-defense, then flee into the night, entirely alone.

Guts would work as a mercenary for several years, his skill with a sword turning the tide of several battles, until he encountered the Band of the Hawk, a mercenary company led by the charismatic Griffith. Griffith, fascinated by him, defeated Guts in a duel and talked him into joining the Band. Guts proved himself as one of the Hawks best members, becoming a raider captain within three years and serving as Griffith's closest confidant alongside the fiery Casca, with whom Guts had a rivalry that eventually evolved into a mutual attraction. Despite their close bond, Guts felt estranged from the ambitious Griffith and eventually left the Hawks to try and find a dream so he could stand as an equal to his friend, a move which deeply hurt Griffith and led to him seducing the Princess of Midland, which led to his capture and Midland attempting to wipe out the Hawks.

Once again on his own for a year, Guts continued to hone his skills, training in the mountains and fighting in tournaments, until he learned of the predicament of the Hawks, who had been reduced to outlaws led by Casca. Tracking them down, Guts reunites with the Hawks in time to drive off a raid, and ends up beginning a relationship with Casca. The two plan a rescue mission for Griffith, reduced to a cripple after a year of torture, and briefly defeats the Apostle Wyald during the escape. Shaken by the state of Griffith, Guts and Casca contemplate heading out on their own, a conversation overheard by him, leading him to summon the God Hand, a quarter of godlike beings who offer to allow him to join their ranks if he sacrifices his friends. Griffith accepts the deal, joining the God Hand as "Femto" as the Hawks are slaughtered by the demons of the Hand. In the massacre, Guts loses his arm and right eye and is forced to witness Griffith raping Casca, with the two being saved only by the intervention of the Skull Knight.

Hiding out at the home of Godot, a blacksmith who he had befriended, Guts discovers Casca has regressed to a mute, childlike state due to her trauma and declares war on demonkind, training himself back to physical shape and equipping himself with a prosthetic hand and a massive blade called the Dragon Slayer. Fully prepared, Guts sets out to kill every Apostle he can find and, in time, get his revenge against Griffith. 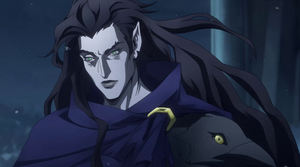 The high general of Styria, Striga is a member of the Council of Sisters, an alliance of four vampires who ruled over Styria with the scheming Carmilla as it's leader while Striga's lover Morana served as the strategist and economist and Lenore as their diplomat. As the resident fighter of the group, Striga often questioned Carmilla's plans, recognizing that the ambition of her schemes could lead to them overextending, but reluctantly followed along with them regardless. After both being informed of Carmilla's plan to conquer the various nations left in chaos following Dracula's attack on mankind and witnessing Lenore's seduction of the forgemaster Hector, Striga, alongside Morana, are sent to the front, leading the Styrian army against various human resistances. The ferocity and resolve of even the lesser human forces shakes the couple, who realize that maintaining an empire will require constant fighting, and they resolve to bring it up to Carmilla upon their return to Styria.

This conversation is never had, as Isaac assaults their castle with a horde of Night Creatures, overwhelming their forces and mortally wounding Carmilla, who kills herself in a last-ditch to kill him. Striga and Morana arrive to see the flaming ruins of the castle and feel Carmilla's death, and the two decide to set out on their own, recognizing that their leader's dream was impossible. Their desertion, combined with the deaths of both Carmilla and Lenore, leads to the dissolution of the Council, with Isaac taking charge as King of Styria in their stead. 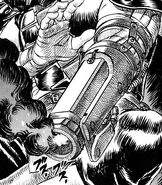 Guts crushes a man's face with his hand

Guts kills an Apostle with the cannon

Guts earning the title of "One Hundred Man Slayer"

Guts dives through fire to wipe out Rosine's "elves"

Through the fire and the flames, he carries on 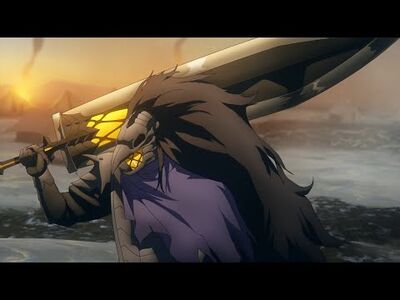