To celebrate the midseason return of Arrow, I'm kicking off the Nolan vs Arrow competition and pitting the two vigilantes and franchise heroes against one another! Oliver Queen! The billionaire playboy who, after being shipwrecked on Lian Yu, returned to Starling City as the vigilante The Hood with the intention of bringing down the corruption that ruined it! Bruce Wayne! The billionaire playboy who trained under the League of Shadows and became a symbol of hope to the people of Gotham and a symbol of fear to it's criminals! WHO...IS...DEADLIEST?!? 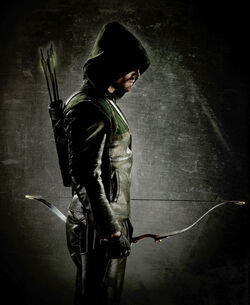 A careless billionaire playboy, Oliver Queen lived an entirely careless life until one fateful day when his father's ship sank, killing him and (seemingly) his girlfriend's sister Sara. Shipwrecked with nothing but the clothes on his back and a mysterious book of names given to him by his father, Oliver ended up the island of Lian Yu, where he met Yao Fei, a Chinese general banished to the island, who took Oliver in and protected him from mercenaries working for Edward Fyers. Forced to work for Fyers, Yao sent Oliver to Slade Wilson, an ASIS agent sent to invesigate Fyers. Trained by Slade and Yao Fei's daughter Shado, Oliver quickly became a skilled fighter and archer. The trio tried to rescue Yao, who Fyers was using as a scapegoat for an attempt to cripple the Chinese economy, but he was killed before they could do so. After shutting down Fyers plan, Oliver would go on further adventures and do battle with various other foes before being rescued and returned to Starling City.

After being rescued, Oliver used his skills to become the Hood, a vigilante focused on targeting those responsible for ruining his city. 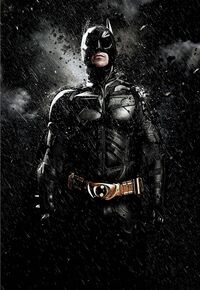 After witnessing the murder of his parents, Bruce Wayne swore that he would do something about the criminals of the city of Gotham. As soon as he came of age, Bruce traveled the world to find himself before being initiated into the League of Shadows and training directly under Ra's Al Ghul. Fully trained by the League but refusing to kill, Bruce took on the symbol of his childhood fear, the Bat, and used it to strike fear in the hearts of criminals. With the assistance of both the GCPD and Lucius Fox, Bruce arms himself with a wide variety of tech to do battle with a variety of criminals, including organized crime, the Scarecrow, and the psychotic Joker. 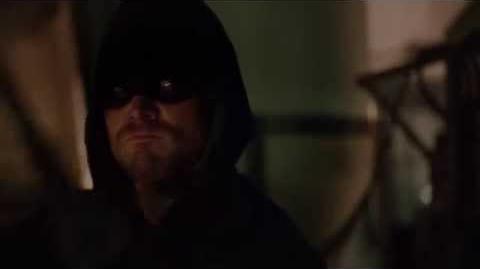 “Stick with me, kid.” Slade gestured for Oliver to follow him as he walked, crouched, through the underbrush of Lian Yu. Oliver, blow slung over his back, nodded nervously. There was an uncomfortable radio silence among Fyers’s men, but that didn’t mean he and his men weren’t still out there. Slade had decided to risk a tripSuddenly, Slade held up his hand, gesturing for Oliver to stop. Misinterpreting the gesture, Oliver walked forward and bumped into Slade, who shot him an annoyed look. “Sorry.” Putting a finger to his lips, Slade gestured towards a group of men wearing gray outfits trudging through the jungle. Voice lowered to a whisper, Oliver spoke up. “I thought Fyers and his men wore black.” “They do. C’mon, we need to get out of-” As Oliver took a step back, his foot rested on a twig, snapping it. “Goddamn it, kid.” The men turned, and with a shout of shock, opened fire. “Get them! Bane doesn’t want anyone interfering with the mission!” Slade pushed Oliver forward as the duo dodged gunfire. “Move, kid, move!”

Oliver jolted awake as his jet came to a landing in the Gotham City airport. His bodyguard, John Diggle, gave him a quizzical look. “You ok, sir? You were mumbling in your sleep.” Shaking his head, Oliver stood up and grabbed his bag. “I’m fine, Diggle. Now if you excuse me…” Bag in hand, he stepped off the plane, hand already in front of his face, to the sight of dozens of flashing bulbs. “...the paparazzi awaits.” With a frown, Diggle stepped in front of his employer and nonchalantly pushed any particularly intrusive photographers out of the way. “The Taliban weren’t this persistent.” As Oliver stepped into a waiting limo, his smile vanished, turning into a scowl as he looked out to see Wayne Enterprises.

My name is Oliver Queen…

After a short car ride, Oliver had arrived at his location. Stepping out of the limo, he forced a smile once again as he prepared to go head-to-head with the enemy.

For five years I was stranded on an island with only one goal - survive. Now I will fulfill my father's dying wish - to use the list of names he left me and bring down those who are poisoning my city.

He stepped into the elevator, and Diggle pressed the button. As he rode to the top, he closed his eyes and took a deep breath.

To do this, I must become someone else.

Play this in another tab.

He stepped off the elevator to see the latest target on his father's list...

I must become something else.

...John Daggett. Even before his father had given him the list, Oliver had never heard a kind word about him in the Queen household. That would make it just a little bit more satisfying to take him down. "Mr. Daggett." Oliver offered his hand, and John shook it. "Mr. Queen. Frankly, I'm a little surprised that you, of all people, are speaking for Queen Consolidated. Isn't there a nightclub you should be running?" His voice barely hid his smug attitude. Taking a seat, he responded, "My time on the island...it's made me rethink my way of life. When I heard about Walter's deal, I figured I could try and handle it." Daggett seemed amused by the idea, and sat down as well.

Raising a quizzical eyebrow, Oliver scanned the room to see a group of Wayne Enterprises board members, but not the supposed head of the company. "Where's Bruce?" Daggett rolled his eyes. "Our esteemed chairman-" He paused for the quiet chuckles by some of the board members, "-is off in places unknown. We rarely see him on nights."

"Let's go, guys. In case you weren't aware, Fisk's people aren't very forgiving of a late shipment." Garrison watched nervously as his men worked at packing up this month's shipment. Not only did he have to worry about some asshole dressed like a bat, now New York was coming under the management of some prick named Wilson Fisk. Since he didn't want to end up like the Russians, he was trying to get his shipments sent in a timely manner.

Suddenly, the lights went out. "The hell?" Garrison looked around, confused. As he slowly drew his pistol, he heard one of his men scream. And not just a scream of fright, or pain, a scream of pure terror. "Go check that out!" Garrison pointed at the sound of the scream, and two of the men went in that direction, guns pointed cautiously. After a minute or two of silence, there was another cry, and then a gunshot, then more silence. "Jesus christ. Can somebody get the lights out, please?!?" Garrison turned and watched nervously as the last of his guys went out in search of the fuse box.

"I got the lights, boss. Where are the other-oh shit, you gotta come see this!" Garrison didn't want to admit it, but he ran to see what the guy I had seen. When he arrived, he dropped his gun in shock. "Holy fuck." One of the men had been strung upside down, and he had already passed out. The two he had sent lay on the ground, knocked out. "It's the freaking Bat! We gotta get out of here, boss!" The man turned to leave, but Garrison stopped him with a shaky hand. "You think we're scared of you, freak?" He nervously cleared his throat. "You aren't shit without you scare tactics. Hell, compared to the other costumed freaks we're hearing about, you ain't shit!"

"Oh, really?" A gravelly, demonic voice spoke from behind him. Garrison yelped and turned around to see none other than the Batman himself standing before him. The other man collapsed to the ground, crying and begging, but Garrison went to fire his gun. In one swift motion, Batman disarmed him, then knocked him out with one swift punch to the head. With a knee to the face, he dropped the last thug. Satisfied, he left the warehouse and headed back to the penthouse.

As Bruce stepped through the door, Alfred turned to see him and smiled. "Ah, Master Wayne. Are you aware there's a Wayne Industries meeting of the board tonight?" Bruce shook his head. "Alred, you know I never attend those." Alfred chuckled. "Of course not, sir. Though it may interest you to hear who they're meeting with." Bruce turned to look at Alfred. "And who would that be, Alfred?" "Your old friend, Oliver Queen." Bruce perked up at the mention of his name. "Is the meeting still happening? Bring the car around, I might just make it."