Otto Octavius or Doctor Octopus is a mad scientist and one of Spider-man's oldest and most iconic villain. Like most supervillains, Doc. Oct has a rough childhood during which he was abused by his dad and bullied by his peers. However, unlike most supervillains, Doc. Oct didn't let these things push him to commit evil deeds, at least initially. Instead, Otto worked hard and became a brilliant and respected scientist. He also invented a set of advanced mechanical arms controlled by the his brain to assist him in research. Just as things started to get better, an accident happened during one of his projects, which led to a radiation leak and caused an explosion. Otto survived and discovered that the explosion had fused his mechanical arms to his torso, and that he was now able to telepathically control his new arms. His mental stability was also severely damaged by the explosion. With this newfound ability and newly-formed mindset, Otto turned to a life of crime and came into constant conflicts with Spider-man. Otto would later form and lead the first incarnation of Sinister Six - a team consisting of Spidey's most deadly enemies such as Vulture, Mysterio and Kraven the Hunter. Otto would also clash with other superheroes such as Avengers and the X-men on occasion, while usually appearing as a foe for Spider-Man.

For the purpose of this battle, Doctor Octopus will be pre-superior and pre-"the end of the world". And his arms will be titanium like the original ones, not adamantium ones that helped him defeat Iron Man and battle Hulk. 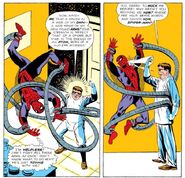 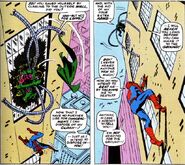 Blocking an arrow from Hawkeye

Victor Fries or Mister Freeze, is a core member of Batman's rogue gallery and long-time resident of the infamous Arkham Asylum. When Freeze was first introduced into New 52, he was a complete lunatic with an obsession with cold, and the entire "saving his wife from unknown disease" thing was a delusion.

However, after Doctor Manhattan meddled with the timeline and merging several new earth elements with the present timeline, Mister Freeze was among the individuals affected and his original, more well-known origin story got restored -

Prior to his career of crime, Victor was a brilliant scientist focused on research to find a cure that can save his wife Nora from a rare disease. However, an accident at the lab ruptured a pipe and that covered him in cryo-fluid. Disfigured and mutated from the chemicals, Dr. Fries survived but could no longer live outside of sub-thermal temperatures. Therefore, he built himself a protective suit to survive at regular room temperatures. Still determined to save his wife, Freeze turned to a life of crime so that he could gain resources to sustain himself and support his research more efficiently. He soon associated himself with individuals such as Joker, Riddler and Penguin, working for them as hired muscle or cleaners. Eventually the cruelness of the criminal world would reshape his personality into a more sinister and sadistic one, earning him a place in the Arkham Asylum. He would also come into constant conflicts with Batman and the Bat family, as well as occasional conflicts with other heroes.

His ice ray proves to be as powerful as Starfire's energy blasts...and he proceeds to take down Starfire while fighting other members of the Outlaw. 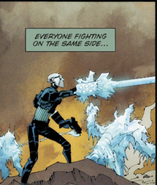 Casually taking down several Dark Knights (superpowered and evil versions of Batman from other universes) during the invasion of dark multiverse.

Breaking into enclosed area by freezing and shattering the metal ceiling.

Freezing and murdering heavily-armed guards simply by spitting water onto them.

Both men are extroardinary minds. They are all incredibly smart both in terms of scientific knowledge and strategy. They are all very cunning and resourceful. Both are among the smartest scientists in their own universe.

Both are very strong. However, thanks to his tentacles, Doctor Octopus is far stronger and more mobile than Mister Freeze. However, when deprived of his tentacles, Doctor Octopus is a normal but a little bit obese human who doesn't exercise reguarly and is in his old age. Freeze, on the other hand, is always a strong peak man at his prime who exercises extensively (or borderline superhuman) .

Both men are "mad scientists" who go too far in their research. Doctor Octopus is arrogant and eccentric in his approach, which at times lead to his downfall. However, he is still a sane person. Mister Freeze is actually a pretty well-adjusted guy compared to other Batman villains. He is obsessed with coldness and saving his wife, but his obsession seldomly affects him in combat or making decisions wisely. But still, he is mentally ill, but Doctor Octopus isn't.

Both are very experienced. Both primarily stick to fighting one hero and his associates, as well as other villains of the aforementioned hero. However, both have occasionally fought other heroes and villains. And since we are using pre-"end of the world" Doctor Octopus and present Mister Freeze, Doctor Octopus falls a bit behind Freeze for his lack of experience in universal or grand-scale events - Freeze was active in forever evil, dark knights metal, year of villain and participated in the last stand against the dark multiverse during death metal, aiding the heroes and freezing large hordes of Groblins with his gun.

Both are very brutal. But Freeze, due to his identity as a Batman villain and long-time resident at Arkham Asylum, is a bit more sadistic and willing to kill than Doctor Octopus in his approach as a result of being exposed to Gotham's level of cruelty. He once froze entire families and had dinner with their dead bodies sitting at other seats to make it up for his lack of this sort of family experience. To celebrate Nora's temporary resurrection he also froze entire theaters of people, which is something Octopus normally wouldn't do.

"Riddle me this,what is cold and grumpy and defeated by a disney princess ?"

"Riddler, go fuck yourself ! And by the way, that isn't even a riddle." Says Mister Freeze,as he pounds the table repeatedly, trying to sound intimidating."It's been more than a year since I lost to that bitch and you people are still making fun of me for it.Can't you just move on and stop laughing like a bunch of lunatics everytime I visit this bar ?"

The crowd, however,remains laughing. "A bunch of lunatics ? Nice choice of words you've got over there, Victor ! Aren't we all lunatics already ? HA !" Says the Joker,after taking a sip at his cocktail.On his right, sits the Penguin,who cuts in the coversation by explaining to Freeze that he has to fight and defeat someone else,someone else notable,to stop them from joking about his defeat at the hands of Elsa.

"Come on, Oswald,I thought you were better than this. When it comes down to it,had you not lost your place to the Red Hood,all of us wouldn't have been drinking at this shithole.This place is too hot for me,and the hygiene is terrible as well."

"Well, my lounge is modeled after an iceberg - the habitat of penguins,so it's natural for you to feel the low temperature.And this place's modeled after the bar owner's habitat,so naturally he places a firey pit down in the foundation.As for the food, since they are either seasoned with parademon bodily fluids or heated with anti-life cooker,what can you expect ?"

"Darkseid has heard you,earthmen !" The bartender yells."Speak ill about Apokoliptian cuisine again and you will find yourselves sanctioned,Omegally.Your soul will burn for eternity in the fire pits,overwhelmed with notthing but loneliness,alienation,fear, condemnation,guilt and despair ! As all that are meaningful to you fade into lies and empty husks !"

"Aw, come on,Big D,haven't the souls of us all been burning in this "federal" place for eternity ? Plus, your omega thing doesn't even work here.If you keep threatening customers like this, none of us will come again,and then no one will be bringing you information about those who are in charge.Word of advice for you - just be a bit nicer and make some improvements,at least add some staff.Heard you have talked to Luthor about bringing in one or two waiters,a talk show host and several strippers for entertainment.That actually sounds pretty nice.But even if you add all those people to the staff, people still won't like this place if you continue refusing to take criticism and make improvement about the food.Then once again you'd be left alone, with no informants. "

"Alright, Darkseid IS ..... going to update this pub to meet the federal healthy standard !" Responds the bartender,as he crushes another parademon head with his palm to squeeze out the sauce inside so that he can make another drink."I need them to bring Kanto here as well.He's always been better at cooking this."He thinks to himself,just as he is about to hand out the drink, the window of the pub is suddenly shattered,as one,two and four robotic arms launched into the room,hurling the Joker and the Penguin over the table.

"You,Dan Turpin ! Hand back Norman Osbron immediately or you will face the retribution from Doctor Octopus !"