Will add a titlecard and intro when I can be asked to do so. 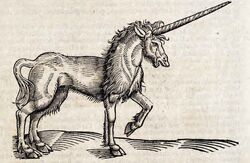 Unicorns are a horned horse or goat-like creatures featured in European folklore. Though majestic and graceful, unicorns are incredibly violent creatures and lack control over their more violent impulses and could only be calmed by the presence of a virgin maiden. Their horn was said to possess healing and purifying properties and was a highly sought after item by European noblemen who were often tricked into buying a narwhal tusk, thinking it to be a unicorn horn. Seen as a symbol of purity and beauty, it is featured on the heraldry and coat of arms of several cities, counties, and heads of state.

Smilodon is an extinct machairodont subfamily of the felids. It is one of the most famous prehistoric mammals and the best known saber-toothed cat. Although commonly known as the saber-toothed tiger, it was not closely related to the tiger or other modern cats. Smilodon died out at the same time that most North and South American megafauna disappeared, about 10,000 years ago. Its reliance on large animals has been proposed as the cause of its extinction, along with climate change and competition with other species, but the exact cause is unknown.

Being essentially a horse, unicorns would have to deal with the same predators including wolves, bears, and of course human, who would hunt it for their magic horn. Unlike horses, however, unicorns were much more violent and lack control over their violent impulses.

An apex predator, the Smilodon typically hunted large herbivores such as mastodons, bison, and horses. They also had to compete with dire wolves, American lions, and primitive humans for prey.

Horses, and by extension unicorns, are roughly even with elephants when it comes to intellect. They have been shown to recognize simple patterns and are surprisingly good problem solvers. Just ask any horse owner if they have any stories about their horses escaping their enclosure. Unlike horses, however, unicorns are described as being wild and lacking self-control, but being able to be calmed by a virgin maiden.

Smilodons were ambush predators and would have been smart enough to stalk and sneak up to their prey before going in for the kill, which would require some smarts. That being said, their skulls are smaller than that of most modern big cats and their bodies were found in tar traps much more often than the American lion which lived in the same area, suggesting that lions were a bit smarter than them.

The battle takes place in a forrest with thick patches of bushes. Hungry and looking for prey, a Smilodon comes across a grazing unicorn. Just as Smilodon gets close, however, the unicorn spots it and engages its would-be-predator.