Wolverine: the violent Canadian X-Man with a the healing factor, indestrucible skeleton and even sharper claws.

Naruto Uzumaki: Konohagakure's hotheaded jinchūriki who is determined to become the next Hokage. 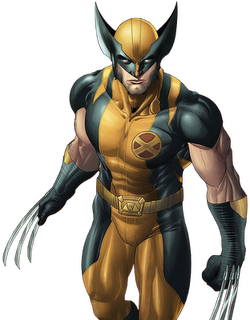 Wolverine's life is mostly clouded in mystery even to himself. Born in Canada between 1882 and 1885, the man that is now largely known as simply "Logan" was born James Howlett, the illegitimate son of Elizabeth Howlett and the Howletts' grounds-keeper, Thomas Logan. When Thomas invaded the Howlett household in a drunken stupor and killed James' father. After this, the young James popped his claws for the first time and killed Thomas, before being driven off by his own mentally disturbed mother.

After this James grew up in the Canadian wilderness and was adopted by a pack of wolves. Eventually, he began to live among humans once more and joined the Canadian Army to fight in WW1 and later WW2. He also worked as a crime-fighting mercenary and joined numerous special task forces and law enforcement agencies, including the CIA.

At some point, James was kidnapped by the Weapon X program who covert his skeleton and claws with Adamantium and wiped his mind in order to turn him into a human weapon. He ultimately proved to be too hard to control and broke free of his programming before slaughtering his former puppet masters.

Now with no memories of his life, James took up the name Logan as it was the only name of significance he could remember and began to once again wander the Earth. Eventually, Logan joined the X-Men under the name Wolverine and somewhat gained a reputation as a father figure among the younger superheroes. 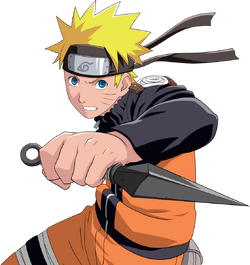 Naruto Uzamaki was born to Minato Namikaze, the Village of the Konohagakure's 4th Hokage, and Kushina Uzumaki. During his birth, the Village was attacked by the Nine-Tailed Fox which was threatening to destroy it. Seeing no other option, Minato sealed the Nine-Tails into Naruto, dying in the process while Kushina died to complications with childbirth.

During his childhood, Naruto was ostracised by most of the Leaf's citizens as they started to believe Naruto had the Nine-Tails' evil within in him. Despite this Naruto befriended Iruka Umino, a teacher of the Leaf's shinobi academy. He also began to believe that by becoming the village's next Hokage, he would be accepted by his pierce.

Thanks to his valiant actions to protect Konohagakure and his actions in the 4th Great Shinobi War, Naruto finally became accepted by the Leaf and even achieved his dream of becoming Hokage.

Wolverine presumably received training from the Canadian Army, CIA, and even received training from the ninja, Ogun. While part of the X-Men, he was put through rigorous training and frequently spars with his fellow X-Men and has frequent visits to the Danger Room. As a shinobi, Naruto had to go through the Konohagakure's Ninja Academy where he learned basic chakra control, hand-to-hand combat, and infiltration techniques. In order to graduate Naruto, along with other members of his school, had to take part in the chunin exam, which existed out of tests of willpower, information gathering, one-on-one combat, and teamwork. After graduating Naruto received additional training from Kakashi Hatake and Jiraiya, both of whom are very legendary and experienced ninja in their own right. Naruto also frequently spars with his fellow Leaf shinobi.

Despite having forgotten almost everything before World War II, Wolverine still has a long career of fighting under his belt. And fought against wild animals, criminals both superhuman and normal, ninjas, other superheroes and supervillains. Due to his unique skills and close ties to elite ninja, Naruto has been sent on missions that are way higher ninja his age usually get send on. This resulted in Naruto being forced to fight other strong ninjas such as Orochimaru, Orochimaru's student Kabuto Yakushi, Kakuzu, Zabuza Momochi, and most notably Sasuke Uchiha, Naruto's love intrest frenemy.

Wolverine doesn't shy away from killing. In the past, he has killed crooks and supervillains either out of self-defense, to protect others or just because they are evil. He does have some compassion, however, and rarely kills someone who doesn't deserve it. Naruto doesn't like killing others, preferring to subdue or reform his enemies instead. However, he is open to the idea, especially when the lives of others are at stake.

Despite coming over as brutish, Wolverine is a very skilled tactician. When Forge monitored Wolverine's vitals during a Danger Room training session, he reported Logan's physical and mental state as equivalent to an Olympic-level gymnast performing a Gold-medal-winning routine whilst simultaneously beating four chess computers in his head. Naruto is pretty creative, often using unpredictable and unorthodox methods to beat his opponents. Usually, he first unleashes a group shadow clones to learn about his enemies capabilities before fully engaging and uses his move set to confuse and surprise before landing a devastating attack.