Sayaka Miki: the magical girl, who's sacrifice sond her down towards her own doom.

Kirito: the Black Swordsman who saved all players from Sword Art Online 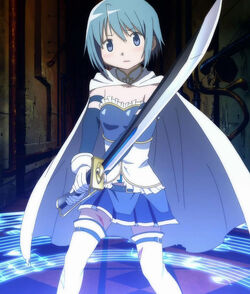 Sayaka Miki, used to be a normal middle school teenager and close friend of Madoka Kaname, however after helping Madoka and a alien cat like being called Kuybey escape from Akemi Homura her life weant down a unexpected path. She was told by Mami Tomoe (a magical girl) that girls can make 'contracts' with Kuybey wich would turn her into a magical girl in exchange for a wish. Sayaka and Madoka accompanied Mami in sevral battle until Mami was killed by the witch Charlotte. This deply shocked the girls and Akemi who tried to hold Mami back. Sayaka eventualy agreed to make a contract with Kuybey if he would heal the hands of her cruch Kyosuke. Sayaka eventualy felt into despair as her Soul Gem became more and more corrupted, adding insult to injury her cruch fell in love with an other girl close to her, Hitomi. This compleeted her corruption and turned her into a witch.

Sayaka's weapon of choice is a cutlass, wich is used for slashing, stabbing and Sayaka is even able throw it. The sword is sharp enough to cut through steel and she is also able to summon multiple cutlass'.

Cutlass summoning: Like I said before Sayaka is able to summon an infinant amount of cutlass' out of thin air.

Superhuman physicality: Being a magical girl, Sayaka has superhuman strenght, speed, duribility and endurance. As such she is able to leap great distance and pull of some pretty acrobatic feats.

Soul Gem: Just like all other magical girls Sayaka's soul is seperated from her body and takes on the form of a gem called (suprise, suprise) a Soul Gem. When her Soul Gem get's to far from her body, Sayaka will be knocked out, how ever this won't be an issue in her magical girl form as she wears it on her belly button. One of the biggest advantges of the Soul Gem is tha since the body an soul are seperated, Sayaka dosn't feel any pain and only can be killed if her Soul Gem is destroyed.

Superhuman regeneration: Becease her wish involved healing someone, Sayaka has the ability to regenrate much faster then a normal magical girl. 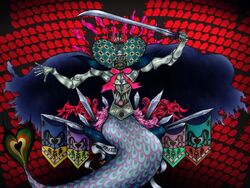 Note: This Rebelion!Sayaka, so she is able to control Oktavia

After Sayaka fell into despair she turned into a witch called Oktavia von Seckendroff. Being a witch Oktavia possess great strenght and duribility. Oktavia is armed is usely armed with two cutlass', tho in Rebelion she is also seen using one larger cutlass. She also able to summon large wooden wheels that can deal great amounts of damage if they hit.

A thing worth noting is that Rebelion!Oktavia is a seprate entity from Sayaka. 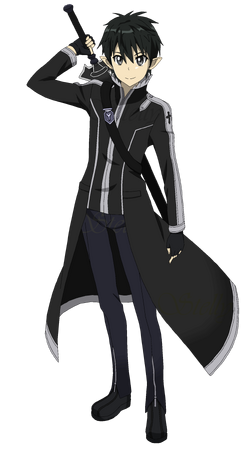 Kirigaya Kazuto, known among his friends and in game as Kirito, was a normal gamer guy and beta tester for the new virtuel reality massive multiplayer online role playing game (VRMMORPG for short), Sword Art Online. When SAO came out, Kirito, along with 10,000 other players logged in and quikly discovered that they couldn't log out. They were soon told by the game's creator Kayaba Akihiko that this wasn't a glitch and that if they would die in the game they would die in real life. After killing various bosses, making various friends, loosing some friends, joining the guilt called "Knights of the Blood" and falling inlove with fellow player Asuna, Kirito discovered that the Kinghts of the Blood guilt leader, Heatcliff is actualy Kayaba Akihiko he challanged him to a duel. If Kirito would win Akihiko would be forced to free all of the SAO players. Kirito won the duel and all SAO players were freed. Kirito would then go on th solve cyber crimes.

Excalibur is a longsword and one of the strongest weapons in ALfheim Online. Kirito obtained the sword after finishing The Holy Sword of the Ice Palace quest along with his friends.

Game logic: Since Kirito just controls an ingame avatar in a virtual reality game he won't actualy feel pain, just a feel a tingling sensation. He is also unable to bleed. Tho explosions can still create headaches and dizziness.

Flight: Just like all other Alfheim Online players, Kirito is able to fly.

Night Vision: Night Vision is a spell that allows Kirito to (what els?) see in the dark.

Battle Healing: Battle Healing is a skill that heals Kirito's health over time. His battle healing so so high that low level players can't hurt him.

Metamorphosis is a illusion spell that changes the user into a random monster, dpending on the user's stats. In Kirito's case it transforms him into a gaint monster with sharp claws and fang, fire breath and goat horns. In this form he effortlessly took out a group of 12 enemy players.

Kirito vs. A group of Salamanders

After Sayaka died and became part of the "Law of Cycles" when Madoka became a god, she gained the pas knowledge and expiriance her past selfs from other timelines had, wich should be worth about atleast a year and a few months plus the unkown amount of time she is helping Madoka (she basicly became a angel at that point). Kirito on the other hand has bin playing VNMMORPG's for years and has bin trapped in SAO for about 2-3 years and fought boss', enemy players and monsters alone most of the time

Sayaka is very justice driven and said that she would kill Kyoko and Akemi (before they were allies). Kirito dosn't like killing and was very upset when he was forced to kill a criminal player.

Sayaka obviously weant through some though shit such as her crush, for whom she made a greate sacrifice for, choocing her best friend over her, the loss of Mami, and the fact that what she was doing was not worth it. These were all the reasons she turned into a witch in the first place, tho by Rebelion she seems to have recovred from the mental scars to some extend. Kirito witnessed alot of his friends and other players die in SAO, these emetional scars were reopened when he met a fellow former criminal SAO when invistagating the murders around the deaths in Gun Gale Online.

I decide wich votes count and wich don't so don't get salty or start making excuses for bad spelling and such.