Kings of myth are often exemplified by their magical weapons, their mighty feats, and the loyal companions they lead into battle. They are viewed as the ideal of what a ruler should be, chivalrous, mighty, and kind. No other ruler embodies these traits like:

Chrom: Exalt of Ylisse and leader of the Shepards

King Arthur: High King of Britain and leader of the Knights of the Round Table 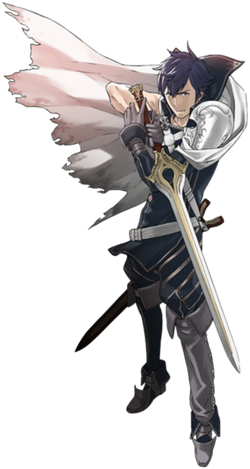 Chrom is the prince, and later Exalt, of Ylisse and a descendant of the Hero-King, Marth, as well the brother of Princces Lissa and Exalt Emmeryn. He is also the captain of Ylisse's vigilante force, the Shepherds, and wields the legendary sword Falchion. He leads his Shepherds force to protect the peace when the neighboring nation of Plegia begins acting suspiciously. He has a strong sense of justice and is a crucial member of his squad.

Falchion is a divine two-handed long sword forged from the fang of the dragon goddess, Naga, upon her departure from her from the realm of the living. The sword is imbued with the power to kill dragons and to heal minor wounds, though the latter ability needs to be manually activated by the user. The blade is self-repairing.

It also soulbinds with anyone of the Ylissian royal family it deems worthy, if a non-worthy person tries to use it the sword will become dull and the person won't be able to use its magical properties.

Gáe Bolg is a legendary magic spear that gives a slight boost its wielder's defense when wielded.

The spear is a type of lance that can be used for melee combat but is most effective as a projectile. 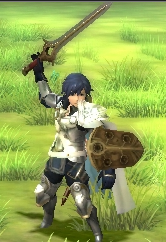 Chrom's Great Lord Armor seems to be plate armor that consists out of a breastplate, pauldrons, gauntlets, and greaves. It doesn't seem to slow Chrom down.

The Shield of Seals, also known as the Fire Emblem, is a magic shield and counterpart of the Falchion. Just like the Flachion it was forged from the fang of Naga and was used for repelling Earth Dragons. It also has the ability to open locked chests. 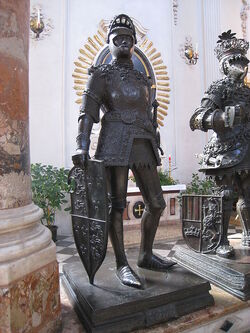 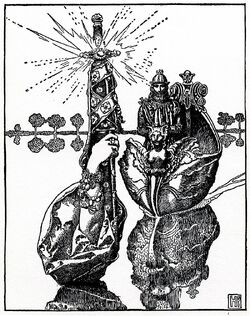 Excalibur is a magical sword made of magical steel and forged in Avalon. Upon being pulled out of its scabbard, it casts a blinding light. It is unbreakable and cuts through stone and steel with ease. Its scabbard has powers of his own as it stops Arthur from bleeding. 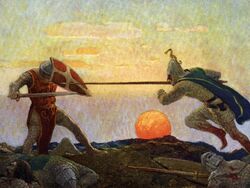 Rhongomyniad, also known as Ron, is broad-bladed spear who's tip is constantly coated in deadly poison and once killed nine men in a single strike. 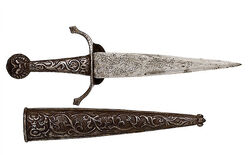 Carnwennan is a throwing dagger that never misses its target when thrown. Despite being rather small, it is powerful enough to cleave targets in half.

King Arthur's Armor exists out of Goswhit, a steel helmet adorned with gold, Wigar, an unbreakable mail shirt, and Wynebgwrthucher, a shield which has been enchanted by Merlin's magic (it's unknown what the enchantment actually does but it's safe to assume it enhances the shield's quality).

Chrom's training as a youth is unknown, but it can be safely assumed he was taught the basics of warefare from a very young age. He also frequently trains with the Shepards, which includes some of the best fighters from his world. It can be safely assumed that Arthur was also trained from a very young age in the basics of warfare. He also frequently participated in mock battles and tournaments with his knights and kings of other realms.

At the start of Fire Emblem Awakening Chrom is 19 years old and had experience fighting against bandits send by the Kingdom of Pelgia, in the years after picking up Robin he had fought against the armies of Pelgia and Valm whos armies include (dark) mages and soldiers riding on wyverns (small dragons that don't breath fire), and fought against the the world ending Grima and its followers, and the undead Risen. King Arthur has fought from his teens to old age against the Saxons, Norsemen, Romans, Irish, Gauls, Goths, Dacians, Scottish, cat monsters, two giants, and witch.

Chrom is strong enough to make jumps and leaps wearing full plate armor without a sweat. Is very agile and often incorporates leaps and jumps into his fighting style. Has taken blows from lightning and fire spells and could still fight. Arthur is strong enough to cut through a horse and the armored guy riding it (keep in mind Excalibur cuts through things very easily). He is also fast enough to outrun Bedivere, who can run as fast as three guys combined, and always was the first one to reach the enemy army during a battle. For durability Arthur got hit by a giants club and was no worse for wear, was slashed in the face without his scabbard and was still fine, and lived long enough to give orders to his knights after being stabbed in the head.