Piglins (represented by me) 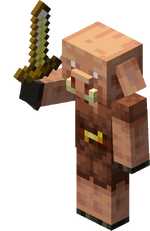 Piglins are a species of pig-like humanoids native to the Nether. Unlike the other mobs in the Nether, piglins seem to be the only ones to have some kind of civilization, possessing a permanent settlement in bastions, and a simple bartering system based around gold. In fact, piglins like gold so much that they refuse to attack people wearing golden armor, perhaps afraid that they will damage to shiney metal. They also use it in their weapons and armor, and fiercely protects their horde in bastions. Those that plan to venture into the Nether best carry a couple of bars on their person if they wish to appeace the piggies.

Piglin Brutes are stronger and more durable than the average piglin. Unlike most piglins they use a golden axe instead of a sword. In Minecraft axes do more damage than swords but are a bit slower. Like most Minecraft tools, it is just below 1 m. Brutes also wear a golden armguard around their left arm.

Golden Chestplate: A chest plate made out of gold with a pair of shoulder guards. For the purposes of this match, only the piglin swordsmen will wear them. 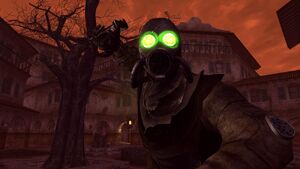 Deep in the vast wasteland of the Mojave, there lays a land forgotten by time, a reminder of what once was before the bombs fell. This is the Sierra Madre. Covered in poisonous gases and rendered completely barren, rumors of treasures untold have driven the wayward wanderer and looter into the Sierra Madre, their greed drawing them into what they think would be a simple heist. What they do not realize when they enter, is that they are not alone.

The ghost people are the sole inhabitants that remain at the Sierra Madre. Unlike your average feral ghoul, these ghastly creatures show signs of limited intelligence. They stalk the Sierra Madre, trapped within their suits which keep them alive, and drag people into the mist to never be seen again. The ghost people are ruthless, and have a set of tools an equipment to make sure that you don't get out alive.

Hazmat Suit: Worn by every single ghost person in the Sierra Madre, the hazmat suit was originally described as an "Experiment within an experiment' by the think tanks at Big MT. They were made to stop the deadly gas Cloud that had entered the Sierra Madre, but unfortunately the suit did not prove to be effective. As for any benefits, the suit is said to hold well against "the elements" and poisons that aren't the Cloud. The suit itself is bulky and stiff, while the cowl itself comes with integrated night vision.

Yeah this gets its own tab idk where else to put it. The Ghost People have a special thing going for them. They cannot die due to old age, or any normal injury, due to an incident involving the Cloud and them mutating. They're like zombies in that they're really hard to put down. The only way to successfully put down a ghost person is to hack off a limb, exposing their bodies to the air and killing them instantly. Otherwise, the Ghost People will get back up shortly after being knocked down.

Piglins are native to the Nether Wastes and Crimson Forest biomes of the Nether and are mostly on friendly terms with the other Nether dwelling mobs. The same cannot be said about how they treat the wither skeletons, tall sword-wielding skeletons that cause anyone who they attack to gain a temporary wither effect (causing them to literally wither away). They also frequently hunt the boar-like hoglins, which can pack quite a punch, and are forced to defend their gold from the most fierce creature of them all: the player.

It's unknown for how long the Ghost People had been functioning, and how long they have been killing or dragging people who show up to the Sierra Madre. It's presumably sometime after the bombs fell, at the very least, but it's unknown how many people they have fought otherwise, but seemingly enough to call for crafting weapons from old supplies. However...really it's unknown.

Piglins seem to have a rather simplistic society. They have a barter system, put a high emphasis on gold (being passive to players who wear gold armor), possess the knowledge to craft weapons and armor, can be seen celebrating with a little dance after a successful hunt, and tend to retreat if the hoglins wiped out most of their hunting party. Piglins also tend to flee from Nether portals, perhaps because they are aware that going outside their homeworld turns them into a zombie. They do seem to hold some superstitions, however, as they also flee from the blue flames of soul fire, which is not any different from normal fire (though Brutes tend to be braver).

Another odd spot is their intelligence. You see, they're not nearly as intelligent as they used to be when it came to before the bombs fell, but it does seem like they have been more than capable of primitive thoughts. They're able to craft weapons out of wood and random objects lying around, and know how to utilize homemade explosives. However, they also become distracted by things such as fireworks or holograms. 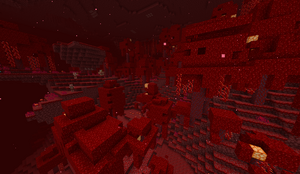 The battle will take place within a crimson forest biome in the Nether. As the name implies, the forest is filled with red trees and has a couple of hills and cliffs. No other mobs will appear in the battle to intervene.