Every great empire needs a group of extrodinary individuals to protect their intrests and security. The United States has the Justice League, Canada has Alpha Flight. But today we look at two groups who fought under the Union Jack!

The Phantomhive Household: Servants and profesional bodyguards of Ciel Phantomhive, each fiercly loyal to their young master.

The League of Extrodinary Gentelmen: the Avengers of the British Empire who protect their home country from terrorist threats and even Marsian invasions! 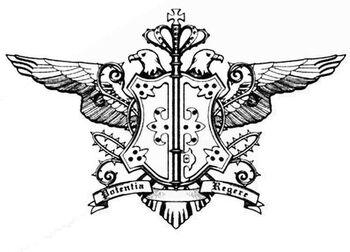 After Ciel Phantomhive survived being sacrificed by an cult and the death of his parents by summoning the demon Sebastian Michaelis, who slaughtered the cultist after being summoned, Ciel took him in as his butler. Because Ciel needed both new servants (the previous household was murdered alongside Ciel's parents with the exception of Tanaka) and an bodyguards in case Sebastian isn't present, Sebastian recruited Finnian, an boy with superhuman physicality thanks to illegal expiriments, Baldroy, an soldier who's entire squad was killed, and Mey-Rin, an female sniper with binocular vision. During their adventures an shapeshifting demon hound called Pluto and snake charmer Snake joined their ranks. 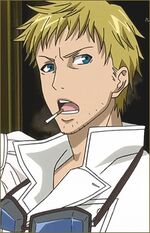 Bardroy was a sergeant in an army, and he was shown to have exceptional planning, foresight, and fighting skills. After his squad was wiped out as a result of his superiors ignoring his advice he was approached by Sebastian Michaelis who offered him a job as chef and bodyguard for Ciel Phantomhive. As a result of these experiences, even after he was recruited by Sebastian, he tends to keep high-powered weapons on hand and puts things in terms of war, such as when he called mice "the enemy," the manor "the battlefield," and the hunt to catch them "a fight."

Candle Ligher: During Noah's Arc Cricus attacked the Phantomhive Mannor, Bardroy was defending himself with a candle lighter. It's a 2 meter stick with a metal end.

Lee-Metford Mk I: The Lee-Metford rifle was a bolt action British army service rifle, combining James Paris Lee's rear-locking bolt system and detachable magazine with an innovative seven groove rifled barrel designed by William Ellis Metford. It shot Cartridge .303 Mk I type amunition, had a rate of fire of 20 rounds/minute, muzzle velocity of 2,040 ft/s (621.8 m/s), a maximum range of 1,800 yards, and a magazine of 8 rounds.

Prototype Lewis Gun: Bardroy keeps a proto-type Lewis gun hidden in the kitchen. While it is very powerfull being able to shoot walls and furneture to pieces with ease. Though since it's a prototype it lacks accuracy and acoridng to Bardroy himself "has a long way to go until it's ready for mass production. 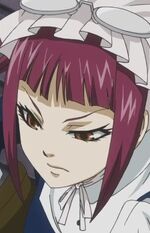 Mey-Rin used to be and still is, an incredible sniper due to her extreme far-sightedness. She claims that she prefers not to use a scope, and in her previous job, her boss stated that being a sniper was the only way to put her far-sightedness to use. As a result, she can wield high-powered rifles, hand-guns, and other firearms. Just like her fellow servants, Bardroy and Finnian she was approached by Sebastian. Mey-Rin gladly accpeted her new role as a maid, as her as some of her old sniper jobs disturbed her.

Dual FN Model 1900: The FN Browning M1900 is a single action, semi-automatic pistol designed c. 1896 by John Browning for Fabrique Nationale de Herstal (FN) and produced in Belgium at the turn of the century. It was the first production handgun to use a slide. The pistols uses .32 ACP caliber bullets in a 7 round magazine.

Lee-Metford Mk I: The Lee-Metford rifle was a bolt action British army service rifle, combining James Paris Lee's rear-locking bolt system and detachable magazine with an innovative seven groove rifled barrel designed by William Ellis Metford. It shot Cartridge .303 Mk I type amunition, had a rate of fire of 20 rounds/minute, muzzle velocity of 2,040 ft/s (621.8 m/s), a maximum range of 1,800 yards, and a magazine of 8 rounds. 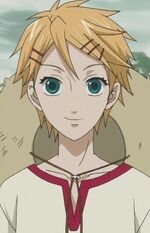 Before becoming a servant for the Phantomhive family, Finnian was held in captivity, forced to watch his friends get killed and kept indoors while frequently receiving numerous injections of an unknown substance which granted him superhuman strenght. Eventually Finnian manged to break out before being picked up by Sebastian and Ciel and was granted a job as gardenar.

Superhuman physicality: Thanks to various expiriments conducted on him, Finnian posses superhuman strenght. Notible feats include killing a man twice his size with one blow, wresteling the giant demon hound Pluto to the ground, and throwing stone statues and slabs with ease. 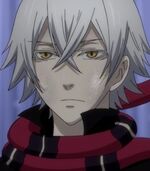 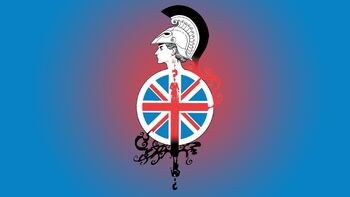 The League of Extrodinary Gentlemen consisted of Mina Murray, Allan Quatermain, Captain Nemo, Dr. Henry Jekyll/Edward Hyde, and Hawley Griffin. With the assistance of the League's "handler," Champion Bond, Mina Murray was largely responsible for assembling the group, working initially under Professor James Moriarty and then Mycroft Holmes. This League was responsible for defeating Fu Manchu and Moriarty during an aerial war they waged over London and assisted in the efforts to stop the invasion of the Martians, which led to the deaths of Griffin and Hyde. They ultimately disbanded after Nemo resigned in protest after discovering that "disease bombs" were dropped on the civilian populace in order to eliminate the Martian threat. 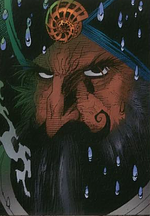 Despite his general dislike of the British Empire, Captain Nemo, real name Dakhar, joined the League after being graced by Campion Bond, grandfather of James Bond, on the promise of another adventure. During his time with the League he ironaclly developed a close friendship with the imperialist Allan Quatermain with whom he shared a big intrest in adventure.

Talwar: A talwar is steel one-edged curved sword of 0.7 meters used for slashing attacks, though can also be used to thrust.

Harpoon Gun: Nemo carries a futuristic harpoon gun, but other than it probably being more effective than your avarage harpoon gun it still does what you expect a harpoon gun to do.

Harpoon Machinegun: Another invation made by Nemo. This harpoon gun is the size of a pistol and shoots little harpoons at the speed of a submachine gun.

After faking his death Allan Quatermain became addicted to the drug Taduki, feeling the need for a stronger high, Allen eventually became an opium addict by the time Mina Murray and Captain Nemo came to recruit him. Despite his old age and his witdrawl from his opium addiction Allen's expirience as an adventurer proved to make him a valuable member to the League.

Webley Revolver: The Webley Revolver is a standard issue service pistol for the armed forces of the United Kingdom, and the British Empire and Commonwealth, from 1887 until 1963. It shoots .455 Webley Mk II bullets at 30 rounds/minute with a muzzle velocity of 190 m/s. It has a maximum range of 46 meters and uses a double action.

Elephant Gun: Allen carries a single shot elephant gun. Elephant guns are designed to provide enough stopping power to prevent harm to the hunter in the case of charging game, provides the same power 50 BMG or 20 mm cannons would give and be carried for long periods, shot from any position or angle, and be well balanced enough to track on rapidly moving animals 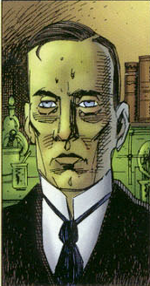 Trying to escape his past and the horrible actions commited by his alter ego Henry Jekyll faked his suicide and flet to France in the hopes of living a new peacefull life. There he became a regular patron of prostitutes. Things seemed to go soothly for a while until he somehow transformed and weant on a killing spree, murdering several people including Anna Coupeau, which eventually let to his discovery and recruitment into the League.

Transformation: Jekyll's metabolism has altered thanks to the potion that transformed him into Hyde, he no longer needs it to transform instead a small amount of stress is enough to transfom Jekyll into Hyde. As Hyde, Jekyll resembles a giant ape with shrap theeth and claws. Hyde is strong enough to rip a man apart with ease, and even tople a Martian tripod after taken a hit from said tripod's heatbeam. 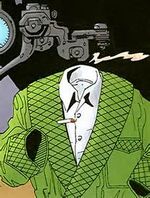 Having escaped a mob of people Hawley Griffin flet to the Correctional Academy for Wayward Gentlewomen run by Miss Rosa Coote, there he raped several girls, causing rumors that the Holy Spirit was impregnating the girls. After Captain Nemo, Mina Murray and Allan Quatermain caught him, he joined the League under the promis of a pardon for his crimes and a possible cure for his condition.

Invisibility: Speaks for itself doesn't it? While compleetly invisible, one could detect hi through infrared vision, a strong sense of smell, or by throwing paint or powder on him.

Experience
Bardroy was a former British soldier, though it was unkown in which wars he fought in, Mey-Rin was a very successfull sniper. Though Snake and Finnian didn't have any combat expirience prior to becomming servants to the Phantomhive family, they did protect Ciel from various normal and supernatural threats alongside the other servants, including a giant demonic firebreathing hound and a group of professional assassins acting like circus performers. Meanwhile, Nemo and Quatermain had various adventures as captain of the Nautilus and African explorer respectively. Meanwhile Hyde and Griffin are basically serial killers. As a group they managed to stop both Fu Manchu and Dr. Moririaty from attacking Loden with their flying machine.

Teamwork and Loyalty
Each of the servants have become close friends during their service under the Phantomhive family and are fiercely loyal and grateful to Ciel for giving them a new life. Quatermain and Nemo certainly bonded over their love for adventure, though there is some distrust regarding Hyde and Griffin's amoral deeds, and while most of them are loyal to the cause, Griffin is likely to betray the League to save his own skin like he did during the Martian invasion.

Brutality
None of the servants have any trouble killing anyone who poses a threat towards Ciel and their fellow servants. While Hyde and Griffin are both murders and rapists with a pretty fucked up moral compas, Quatermain and Nemo only kill if they were forced to.

Physicality
All of the servants are in their early to mid 20s and are all in pretty good shape. Especially Finnian who posses superhuman strenght and Mey-Rin who's agility boders to superhuman. The League is more of a mixed bag, Quatermain is an old man in his 70s who is comming of an opium addiction, Nemo and Griffin are in their late 30's to mid 40's and seem to be in pretty good shape and lastly Hyde, who is a litterially big beast of a man.