Disney has adapted a lot of fairy tales, legends, and myths over the years. From classic books like Jungle Book and Tarzan, to fairy tales like Snow White and Sleeping Beuty, and legends like King Arthur and Robin Hood. And today we put two demigods against each other who got their legends adapted into movie by the big WD!Maui: The Polynesian hook-wielding demigod on a mission to return the Heart of Te Fiti!

Hercules: The mighty son of Zeus on a quest to restore his godhood. 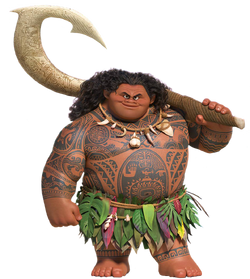 When Maui was born his parents were disgusted with his appearance, and threw him into the sea. Taking pity on him, the gods saved him and raised him as their own, granting him immortality, superhuman physicality, and a giant magic fishing hook that allowed him to shapeshift into animals. Despite his demigod status, Maui's cruel upbringing would forever scar him. He felt inadequate to humans and used his powers to benefit mankind in any way they pleased as a means to earn the love and validation that he was denied by his parents. He lifted up the sky, lifted up island from the sea, slowed down the sun, brought fire from the underground to the surface, created the wind, and even buried an eel in the ground which caused coconut trees from the ground, gaining a magic tattoo for every feat he achieved.

As the people acclimated to Maui's gifts, he had to perform increasingly grand feats to sustain their adulation. This led him to steal the heart of Te Fiti, the mother island. But upon removing the gem, a giant vulcanic demon called Te Kā. During a confrontation with this demon, Maui was separated from his hook and got stranded on an island.

Maui would eventually meet Moana, the girl of the chief of the island of Motunui. While originally not trusting each other, together they retrieved Maui's hook and returned the heart of Te Fiti, restoring peace in the Polynesian islands.

Magic hook: Maui's famous bone-like hook he gained from the gods along with his superhuman powers. According to Maui himself, he used it to slow down the sun, fish island from the bottom of the sea, and battle giant monsters. It is infused with magic that allows him to shapeshift into animals (birds, sea creatures, insects, mammals, reptiles, etc.), though if hit with enough force Maui can be knocked out of this transformation. It is about the same size as Maui himself, though thanks to his superhuman strength Maui can swing it around without much effort. It is strong enough to slash through stone and even the magma arms of Te Ka.

Superhuman strength: Maui is strong enough to rip off the leg, and resist the jaws of the giant crab Tamatoa (crab David Bowie), jump and leap great distances, lift up Moana's boat with one hand, and easily push around large boulders. Though his greatest feats of strength are lifting the sky, lassoing the sun, and fishing island from the bottom of the ocean. Superhuman durability: Maui is durable enough to withstand a beating from Tamatoa's claws, being smashed against stone walls, able to recover from a direct hit from Te Kā's giant magma hands, drop down from a large height into water with no injury, and run along Te Kā's body only having the same amount as pain as someone running barefoot across hot asphalt.

Born to the gods Zeus and Hera, Hercules possed great strength even as a baby. Hades, sensing the threat a grown-up Hercules could pose to his plans to take over Olympus, commanded his minions to take him down to the mortal world and turn him mortal through means of a magical potion. Though they succeeded in the first part they are interrupted by two human peasants, Amphitryon and Alcmene, before Hercules finishes drinking and the final drop falls wasted on the ground. In a desperate attempt to kill Hercules the two transformed into snakes and attacked the infant, only for him to beat them back, as the potion was enough to take away his mortality, but not his godly strength. Amphitryon and Alcmene adopt the child, considering his arrival a gift from the gods since they are themselves childless.

It wasn't until Hercules became a teenager that his parents, and Zeus himself, revealed his true origins and that he only could return to Olympus if he becomes a true hero. Thinking that he would need some training first, Hercules went to see Philoctetes a trainer of heroes. Though first refusing to train him, Philoctetes changes his mind after Zeus zapped him with a bolt of lightning.

During his adventures, he saved a woman called Megara, a secret Hades worshipper who related the events to Hades. Angered, Hades sents waves of monsters at the hero, and even use Hercule's love for Megara against him, but despite his efforts, Hercules was still able to achieve godhood to be with Megara.

Sword: Hercules carries what seems to be a short straight sword. It was able to cut through the Hydra's neck and be bend, used as a boomerang, and then straighten out again without any damage to the blade. Bow: Bow and arrow, not really anything special worth mentioning. Cuirass: Presumably made out of bronze with leather straps protecting the area above the knee.

Superhuman strength: Hercules is strong enough to shatter a cliff side, wrestle big monsters, jump and leap great distances, lift a house, easily lift giant boulders, and even grab a fucking tornado which he uses to suck up three titans and then throw it into outer space. Superhuman durability: Hercules survived being punched so hard he breaks a rock with his head, get flung across a city with little injury, and get accidentally zapped by Zeus' lightning bolt with little injury.

Maui has been adventuring for years, fighting monsters, traveling the ocean and one point even traveled to the Underworld where he fought Tametoa and presumably other monsters to bring fire to the surface. Hercules didn't get into fighting until adulthood, but he did get into a lot of fights after Hades found out about him and threw monster after monster at him before releasing the titans on him.

Maui has not gotten any training as far as we know. Hercules, on the other hand, has been trained by Philoctetes in swordsmanship, archery, damsel rescuing, knife throwing, parkour, keeping his balance, and a bit of martial arts from when he a teenager all the way to adulthood.

Both of them don't have any problem with killing monsters, and while Maui did once leave Moana (a teenage girl) on an abandoned island with only rocks, he mellowed somewhat and became more compassioned in the end of the movie.