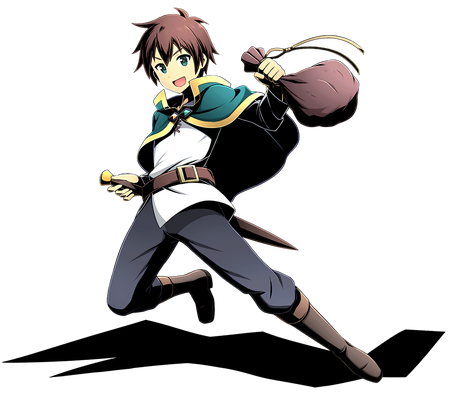 Kazuma Satou was a normal shut-in NEET who, upon returning home, pushed a girl out of the way of an oncoming vehicle, dying in the process and was promptly greeted by the goddess Aqua who revealed to him that those who die before their get the option to be reincarnated in a different world to get a second shot of life and so that they could fight the Devil King, a demon lord who is threating the world. She then revealed that the vehicle Kazuma pushed the girl out of the way off was actually a slow-moving tractor and that he died of shock. Angry at her mockery, Kazuma chose her to come with her to the new world, effectively removing her from her position as a goddess. In order to make ends meet and fulfill their mission, Kazuma and Aqua became adventurers and were soon joined by Megumin and Darkness.

Because Kazuma never picked a class, he was automatically given the standard Adventurer class. As a result, he isn't able to specialize and obtain high-level skills but is able to pick the skills of any class, allowing him to generalize and mix and match skills to come up with unorthodox attacks. Because he is the only one with a braincell, Kazuma acts as the de facto party leader. 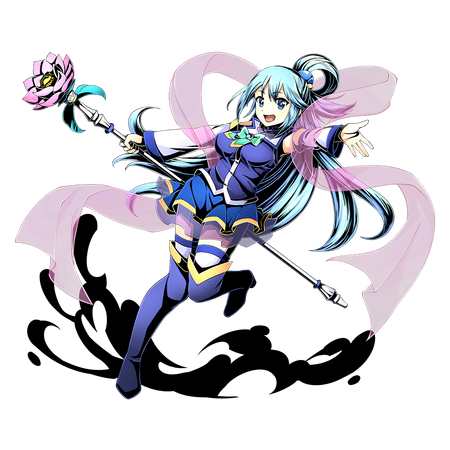 Aqua is the goddess of water who was assigned to allow young souls to reincarnate in the other world so there would be a good supply of adventurers to fight the Devil King. After mocking Kazuma for the way he died, he chose her to come with her to the other world and was removed from her position as goddess. Because of this she desperately urges Kazuma to defeat the Devil King so she can go back to being a goddess.

Because of her lack of offensive capability against anything that isn't undead or the result of dark magic, Aqua tends to stay at the rear while using supportive spells to aid her party. Though she is willing to step up and attack if the undead are involved or when she is pissed off, with the latter usually ending badly for her. 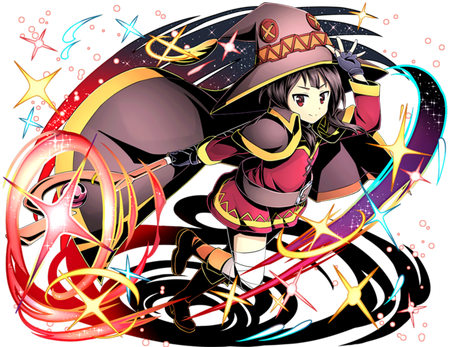 Megumin is a member of the Crimson Demon clan who is obsessed with explosions. As a child she accidentally released both halves of the sloth and violence goddess Wolbach, with one side manifesting as a giant monster and the other a woman. The latter killed the monstrous half with explosion magic before disappearing, starting Megumin's obsession with explosion magic and inspired her to master it herself so that she could one day show the mysterious woman her own explosions. After she arrived at Axel Town, she gained a reputation as a crazy woman and found it hard to find a party until Kazuma and Aqua allowed her to join them.

Like Aqua, Megumin tends to stay at the back, waiting for the right moment to use her explosion magic. 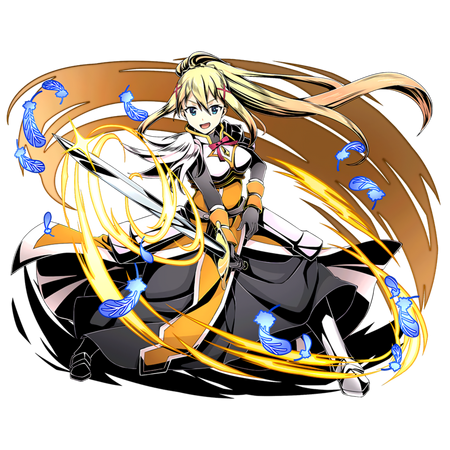 Darkness, real name Lalatina Ford Dustines, is a noblewoman and very outspoken masochist who became an adventurer to prevent being married off. Shortly after starting her adventuring carrier, she met the thief Chris, who was actually her patron goddess Eris in disguise. The two formed a duo before Chris was forced to leave to take Aqua's place, though they still remain friends. As a result, Darkness joined Kazuma's party after hearing about Aqua and Megumin getting covered in toad slime.

Because of her own masochistic tendencies and high durability she serves at the front line with Kazuma. Though because of her inability to aim, she is only really good for taking the attention away from the rest of the party and act as a meatshield, not that she minds.

The Ender Dragon is one of the two boss mobs, next to the Wither, in Minecraft and can only be found in the End dimension. It is only hostile to the player (or in this case Kazuma and company). Upon being defeated the Ender Dragon drops a ton of Exp and dragon egg above the island's exit portal structure which activates shortly after, allowing the victorious adventurer to leave the island. 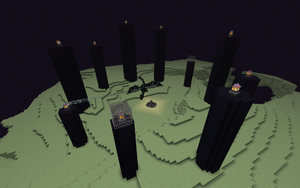 As you might have guessed, the battle takes place in the End. Or to be more specific: its main island which floats within the void. While there are more locations, creatures, and structures in the End than I mention down below, Kazuma's Party will be unable to reach them so they are basically irrelevant. 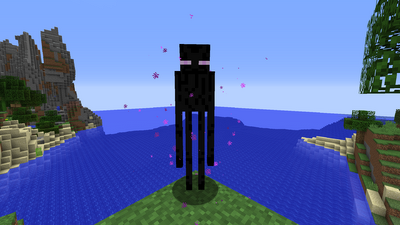 Endermen are tall, slender humanoid creatures native to the End and are capable of teleporting at most 32 m at will. Endermen are usually passive unless they are attacked or if someone looks directly at their face. The Endermen's method of attack is to simply charge at their enemy and teleport behind them when taking damage. They automatically teleport away when a projectile is fired at them. They take damage from water.

When killed, Endermen have a chance of dropping an Ender Pearl which when thrown teleports the user to wherever it lands while inflicting minor damage. When used, Ender Pearls have a 5% chance of spawning a hostile but weak bug-like Endermite. 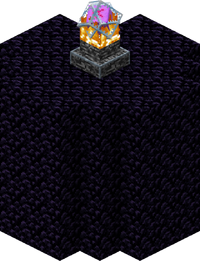 On top of them is are Endecrystals. When the Enderdragon is within a 32 m radius of an Endercrystal it will fire a beam that will slowly heal it. When a crystal is hit by a projectile or physical attack it will explode with a blast radius of 6 m. If the Enderdragon is being healed by a crystal upon its destruction, it will receive additional damage. 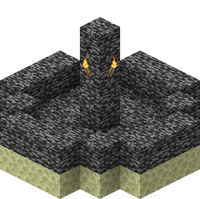 A deactivated exit portal structure stands in the very centre of the main island surrounded by the Obsidian Pillars. The Ender Dragon occasionally perchers on top of it. The portal activates once the Ender Dragon has been slain.