Cyborg ninjas, just like my Chinese anime. They combine stealth along with incredible speed and agility and are able to take out a squad of highly trained special ops units in a flash. Today we put two cyborg ninjas against each other who both swapped sides. 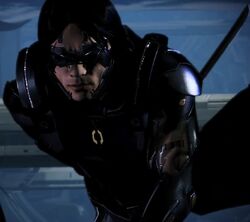 Kai Leng joined the Alliance military with fake credentials at the age of 16. After 4 years of service he received N7 status, but was dishonorably discharged and imprisoned for 20 years in an Alliance prison the same year for murdering an krogan in a Citadel bar using a standrt issue combat knife.

Because of Leng's prowess in combat and xenophobic nature Cerberus took intrest in him and broke the former N7 out of prison. After giving him cybernetic inplants Cerberus began to use Leng as a wet-work operative, a job at wich he was so succesful in Leng quikly became the organization's most trusted agents.

Monomolecualar blades are typically used by Phantoms, N7 Shadow Infiltrators and Leng himself. While these blades are extreemly shrap, being abel to cut through barries, and pierce high tech armor.

Another weapon used by the Cerberus Phantoms, that fires kinetic-based projectiles.

Shield Boost: This ability allows Leng to quikly regen his kenetic shield. Electric Slash: Leng unleash a wave of electrical energy from his sword to stunning and damaging all enemies in a cone like area. 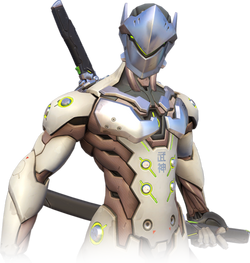 Genji Shimada was born into the Shimada clan, an highly powerfull criminal organization. As such he lived an life of luxery and privilege, and underweant a ninjatraining, though he preffered to live an playboy lifestyle. After his father died, his older brother Hanzo pressured him to take his position as Shimada member more seriously, this sparked an fight between the brother in wich Genji seemingly died.

His corpse was found by the global peacekeeping force Overwatch, who revieved him and offered him an new cyborg body if he agreed to help the organization to put an stop too the Shimada clan. He agreed, but after he succeeded in bringing an end to his brother's criminal empire the cyborg lost his sense of porpuse along with his identy. After leaving Overwatch Genji met an Omnic monk called Zenyata who offered to help him, while rejecting his teachings at first, the monk eventually helped him come to terms with his new cyborg body.

Wakizashi: An wakizashi is a Japanese blade, with an blade lenght of 30 cm. Genji uses this for melee attacks and his Swift Strike and Reflect abilities. Dragonblade: Genji's (seemingly cybernetically enhanced) katana. Genji is fas enough to swing this blade once a second, dealing massive damage to enemies. While he can use Deflect and Swift Strike while using it, he can't use his shurikens alongwith it.

Shurikens hand thrown by Genji. He can either throw them one by one or in a shotgun like blast. They are dispensed from Genji's cybernetic arm.

Swift Strike: Genji darts onward, slashing with his wakizashi and passing through foes in his path. Deflect: With lightning-quick swipes of his wakizashi, Genji reflects any oncoming projectiles and can send them rebounding towards his enemies.

Kai Leng weant through the N7 training program wich includes 20 hours of training until someone reaches the rank of N1, after that the oprative goes off planet to train in zero gravity combat, military free-fall (parachuting), jetpack flight, combat diving, combat instruction, linguistics, and frontline trauma care for human and alien biology. With N6 providing actual combat experience in combat zones throughout the galaxy. It can also be assumed that Kai Leng was trained in the use of his new body and equipment after gaining his cybernetic body. Not alot is known about Genji's training regime, but it can be safly assumed that he was thought kendo, ninjutsu and various other martail arts, he has also been seen sparring with other Overwatch members.

Prior to being an Cerberus oprative Leng weant on patrol and reconnaissance missions, and took part in the Raid of Entiyon. After becomming an Cerberus agent Leng mostly gathered intel, preformed assassinations, and infiltratoin missions. During his times with the Shimada Clan, Genji mostly neglected his duties, which meant that he partied more than he fought, but after joing Overwatch he became part of it's black ops team, Black Watch, and dismanteled his brother's criminal empire.

Leng acts cocky and arrogant, often mocking his enemy during combat, but once he begins to loose he tends to panic and is easy to anger. Genji used to be troubled about his relation with his brother and doubt his own humanity after gaining his cybernetic body, but affter following the lessons of Zenyatta he became calm, collected and at peace with his new body.

The usual stuff. Proper grammer, good reasoning and no bias votes like "Kai Leng cause ME is my fav scifi game" or "Genji cause he is my main".