Fat guys always seem dumb and slow, always carrying heavy weapons and somehow being way stronger than their size would allow. Guys who love explosives seem to have taken after their main weapon of choice, being equally loud and chaotic, and of course, having an injury related to their main weapon of choice. Despite being drastically different personality types, opposites attract and so it seems with these two duos. Junkrat and Roadhog: the criminal duo from the post apocaliptic Outback! vs. Demoman and Heavy: two insane mercs employed by Reliable Excavation Demolition!
WHO IS DEADLIEST!? 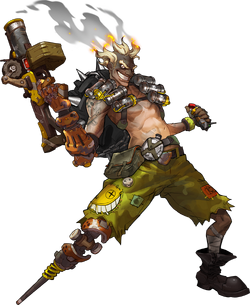 Junkrat was one of the survivors who would be later known as Junkers. Like many others affected by the radiation, he turned insane which made him ideal for handling explosives. This love would quickly turn into an obsession, costing him his right arm and leg, which he replaced with a robotic peg-leg and arm.

After finding an extremely valuable secret in the bones of the omnium, Junkrat was constantly followed by bounty hunters, gangs, and opportunists wherever he went until he made a deal with the Junker enforcer Roadhog, who grudgingly agreed to be his personal bodyguard in exchange for a fifty-fifty share of the spoils. The two would eventually leave the Outback and go on a worldwide crime spree.

Frag Launcher: a grenade launcher, presumably made by Junkrat himself. It shoots spherical bombs made by Junkrat. It carries 5 bombs per clip, and has a muzzle velocity of 17 m/s.

Concussion Mine: Junkrat carries concussion mines, one of which can be used at the same time. They can be placed on any surface (walls, ceilings, and floors), and can be used to knock enemies back and dealing damage, or Junkrat can use it on himself to send him flying over the battlefield.

Steel Trap: a bear trap which keeps enemies in their place for 3 seconds before it breaks.

RIP-Tire: a remote-controlled explosive-filled tire. The RIP-Tire can be active for 10 seconds after which it explodes, though Junkrat can explode it anytime he wants. It is able to climb up walls. Controlling the RIP-Tire takes Junkrat's full attention so he can't move while it's active. 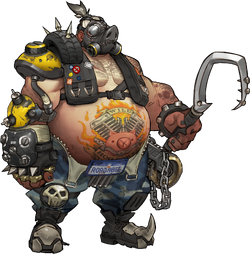 In the aftermath of the Omnic Crisis, the Australian government gifted the Australian omnium and the surrounding area to the omnics that had nearly destroyed their country, hoping to establish a long-term peace accord. However, this only angered the people who were displaced by this action, including Mako Rutledge, who would be later known as Roadhog. Furious, these displaced people took up arms and attacked the omnium. Events continued to escalate until the rebels sabotaged the omnium's fusion core, resulting in an explosion that destroyed the facility, irradiated the region, and littered the Outback with twisted metal and wreckage for kilometers around, turning it into a wasteland.

Mako adapted to the new wasteland by donning a mask and riding the broken highways on his chopper. Eventually, he became an enforcer and was hired by Junkrat as his personal bodyguard. Together, the two went on a worldwide crime spree, stealing everything they could get their hands on and leaving destruction in their wake.

Scrap Gun: a shotgun-like gun which fires little bits of scrap metal. If fully filled it can shoot a maximum of 5 times with a maximum range of 20 m. Alternatively, it can shoot a shrapnel ball which scatters pieces of shrapnel upon impact, it has a maximum range of 29 m. Lastly, Roadhog can cram a top-loader onto it which he pours ammo in, allowing him to cram out ammo for 6 seconds, effectively turning the Scrap Gun into an automatic shotgun.

Chain Hook: speaks for itself. It's a hook connected to a chain which he can use to pull enemies closer to him or just whack them with it.

Gas Container: a container filled with unkown chems. By breathing it in Roadhog will be able to heal some of his wounds, while he is able to move while using it he can't attack. 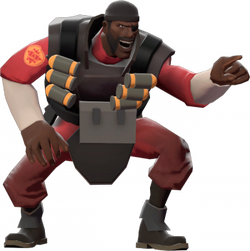 Thanks to his love for explosions which started at a young age, a six-year-old Tavish Finnegan DeGroot, later known as the Demoman, lost his original set of adoptive parents, along with his left eye. Growing up at the Crypt Grammar School for Orphans near Ullapool in the Scottish Highlands, the boy's skills with explosives continued to develop, as did the myth around him.

Eventually, his stories reached the ears of none other than his original parents. His parents lovingly explained that the reason he was abandoned at birth was so his demolition skills could develop on their own, a long-standing, cruel, and wholly unnecessary tradition among the Highland Demolition Men.

Grenade Launcher: an M79 grenade launcher modified to have a revolving chamber. It shoots pill shaped bombs similar to 40 mm grenades. It can carry a maximum of 4 grenades in its chamber and has a muzzle velocity of 39m/s.

Stickybomb Launcher: again, speaks for itself doesn't it? It launches spiked bombs that can be deployed on any surface. It has a magazine size of 24 bombs and 8 bombs can be deployed at a time. He can use it to lay traps or launch himself across the battlefield.

Chargin' Targe: an iron-plated wood shield with a big iron spike in the middle. It can be used for defense and to ram enemies with the spike. This targe seems to be smaller than a normal targe and is worn around his arm and used along with the other weapons in his arsenal. 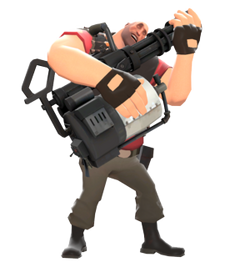 Mikhail "Misha", better know as the Heavy, is a large bear of a man hailing from the Soviet Union. Much is unknown about the Heavy's past, though in the game Night at the Inventory the Heavy mentions being trained in a military base for children, and by the fact that he uses his fists as a melee weapon suggests that he was a boxer (or was at least trained in boxing).

Minigun: the Heavy's personal minigun which he lovingly names Shasha. It weighs 150kg, fires costume tooled cartridges and has a has a rate of fire of 10.000 rounds per minute. It has a magazine of 200 bullets.

Shotgun: the Heavy uses a sawed-off Ithaca 37. It fires 28 gauge bullets and has a magazine of 6 rounds.

Sandvich: a sandvich that somehow heals those who consume it. While eating it the Heavy cannot move, alternatively, he can give it to his allies to heal them instead.

Fists of Steel: a pair of steel boxing gloves made out of the hands of one of Heavy's robot double gangers.

Experience
Junkrat and Roadhog both fought other Junkers in the radioactive Outback, law enforcement during their worldwide crime spree, and all kinds of people who are after Junkrat's treasure. Roadhog himself fought in the Australian Liberation Front, performing many acts of anti-omnic terrorism which eventually lead to the Outback's current state. The Demoman and the Heavy both fought for RED, fighting their BLU counterparts, Greyman's robots, the TFC (Team Fortress Classic) mercs and even a giant monstrous loaf of bread.

Teamwork
Junkrat often comes up with crazy plans which Roadhog (begrudgingly) goes along with. While Roadhog is often annoyed at Junkrat's shenanigans, but the two stick with each other during their crime spree. Demo and Heavy both fight in the same mercenary group, but that's how far their relationship goes.

Brtuality
Both duos love to fight, shoot, kill, and blow-up people. While Junkrat, Heavy, and Demo seem to take almost a chaotic childish joy in fighting. Roadhog is much calmer, but still often laughs and mocks his enemies.

Intelligence
Junkrat is smart enough to make his own bombs and explosives but is rather dimwitted often ruining his own big flawed master plans at the first step. Heavy, self admittedly, is rather slow and not that bright. As for Roadhog and the Demo, neither of them are really stupid but also aren't really that smart.

The Demoman and Junkrat both suffered explosive-related injuries with the Demoman having lost his left eye while Junkrat lost his right arm and leg which he replaced with a robotic peg-leg and robotic arm. On top of the loss of his eyes, the Demo is also a giant alcoholic, often drinking on the job. Roadhog and the Heavy are both overweight, but surprisingly strong, being able to easily lift people.