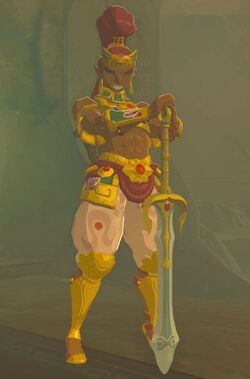 The Gerudo are a reclusive tribe of desert-dwelling women native to the Kingdom of Hyrule. Despite being exclusively female, every hundred years a powerful man is born into tribe and are typically appointed as king of the Gerudo, with one of these man being an incarnation of the demon Demise known as Ganondorf.

Though the Gerudo served Ganondorf loyally, they rebelled against him after his disillusioned second in command Nabooru spurred them into action. Since then the Gerudo have been steadfast allies of the Hylian royal house.

In preparation for Ganondorf's reincarnation, Zelda, on behalf of the royal family, asked the Gerudo Chieftain, Urbosa, to pilot Vah Naboris, one of the Divine Beasts. Urbosa agreed but was slain alongside the other champions and had her soul trapped inside of Vah Naboris. With the aid of the new Chieftain, Makeela Riju, Link managed to free Urbosa's soul so she could aid him in the final battle against Calamity Ganon. 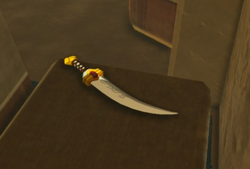 A common Gerudo sword typically used as a self-defense weapon. Its curved blade makes lends itself well to cutting. Making a rough estimate I'd say its around 60 cm in length. It is presumably made out of steel. 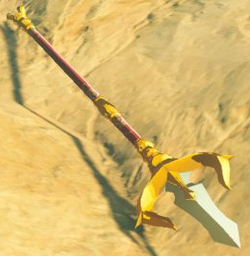 The center of the spear's gravity is in its tip, making it a bit unwieldy for the average fighter. In the hand of a skilled Gerudo warrior, however, it is of reliable strength. The Gerudo hold the spear with both hands. Its around 4 m long. The tip is presumably made out of steel. 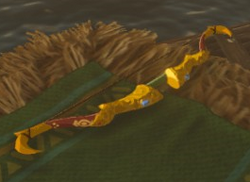 The Gerudo shield is designed to compliment Gerudo sword fighting techniques. Its curved inwards and presumably made up out of layers of steel, leather, and wood with ornate gold and gem decorations on top. While the average Gerudo shield is round, the radiant shield used by captains has a teardrop shape. The shields are somewhere around 60 cm in diameter. 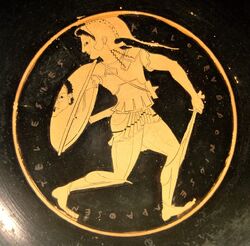 The Amazons are a warlike tribe of warrior women who lived in what is today known as Asia Minor. According to Apollonius Rhodius' Argonautica, the first Amazons were the daughters of the war god Ares and Harmonica, nymph of the Akmonian Wood, and that their main concern in life was war. Originally native to Libya, the Amazons migrated through Egypt and Syria, eventually settling in Anatolia, though exactly where and if they founded any cities differs from writer to writer. Because of their close proximity to the Greek city-states and their colonies, the Amazons often raids against them.

Notable Amazonian queens include Penthesilea, who lead the Amazons in the Trojan War against the Greeks, her sister Hippolyta, whose magical girdle, given to her by her father Ares, was the object of one of the labours of Heracles and their mother, Otrera, consort of Ares and the first Amazonian queen. 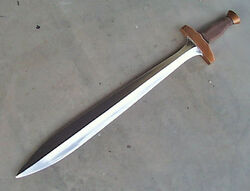 The xiphos is a double-edged sword with that is about 60 cm in length. Its leaf-shaped blade lends itself well to both thrusting and slashing. It is made out of bronze.

The dory is a spear that typically was used by hoplites. The flat leaf-shaped spearhead was composed of iron and its weight was counterbalanced by an iron butt-spike. It is around 1.3 m in length. 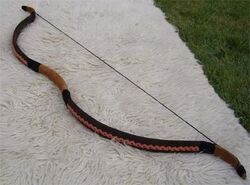 The Amazons would have used wooden recurve bows reinforced with sinew glued to the back to prevent breakage and to increase the bow's cast. 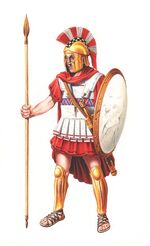 A linothorax is a cuirass made out of several layers of linen glued together by rabbit glue. Though such a piece of armor sounds ineffective by the face of it, researchers who made modern replicas have determined that the armor wasn't just comfortable, but also effective against the weapons of the time.

An aspis is a round shield primarily of wood with a thin layer of bronze on top. It is about 90 cm in diameter.

A Chalcidian helmet was a type of bronze helmet used by the warrior of ancient Greece. It consisted of a hemispherical dome, and below that, generally inset from the top dome, a pair of cheekpieces and a neck guard, with a substantial loop on either side for the wearer's ears. In the front, between the two cheek pieces, was a small nasal bar to protect the wearer's nose.

Living in the harsh climate of the Gerudo Desert, the Gerudo are forced to deal not only with the unbearable heat but also the monsters that dwell the desert. These include the bokolins (goblin-like creatures), lizalfos (fire breathing humanized lizards), the hostile Yiga clan of assassins, and even giant sharks that swim through the sands called Molduga. Despite their status as warrior women, they don't seek conflict with the other races of Hyrule and rarely travel outside their homeland. Still, being surrounded by so many enemies and hostile wildlife they are often forced to defend themselves.

Being a warlike people, the Amazons often raided nearby settlements for loot and men (who would often be used as slaves and for breeding) and fought against other tribes such as the Scythians. One of the more notable appearances of the Amazons was during the Trojan War where they aided Troy and its allies against the Greeks.

The Gerudo all tower over the average Hylian man, with 8 feet being considered short for a Gerudo, and are all jacked regardless of whether they are guards or traders. This implies that the Gerudo are capable of physical feats far beyond a normal human.

The early Amazons were daughters of the war god Ares and thus possed superhuman physicality inherent to all demi gods. This lessened overtime, however, with only the queens of the Amazons possessing this kind of strength. Though being descendants from demi0gods, the Amazons are all in peak condition.

The battle takes place in a Hylian town that is being in process of being plundered by the Amazons. A group of Gerudos notices the carnage and decide to protect the villagers.