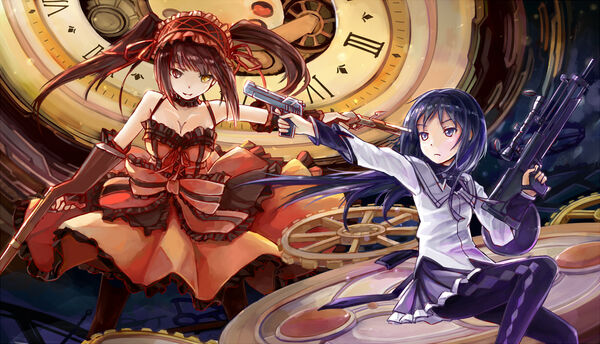 Originally a meek and physically weak girl, Homura Akemi became a Magical Girl who after witnessing the death of her friend Madoka Kaname by making a wish with Kuyube to relive her first meeting with Modaka after her death in the battle against the Witch Walpurgisnacht.

Despite her attempts to save Madoka's life, Homura failed each time, and was forced to witness her death or her fall into despair and her subsequent transformation into a Witch before traveling back in time to the point where she first met her. Over time, this drive to save Madoka's life turned into an obsession and she started to become emotionally numb and hardened with each loop.

Kurumi Tokasaki is a rather psychotic Spirit with the desire to travel back in time to kill the first Spirit, thus preventing her species from existing and wreaking havoc on the human world. Despite her noble goal, Kurumi is a rather sadistic individual, taking much joy in killing the victim she is forced to devour to refuel her time and Spirit energy.

One day, Kurumi learned from a mysterious individual about Shido Itsuka, a high-school boy with an abundant amount of Spirit energy from sealing away the power of other Spirits who could give her plenty of energy to travel back in time and still have enough energy left to fight the First Spirit. Though she at first tried to devour Shido, she later fell in love with him cause Date A Live is a harem anime.

Homura has lived in countless of timelines trying to prevent Madoka from becoming a Magical Girl and in the end dying. During these timelines, Homura was forced to fight fellow Magical Girls and beasts Witches. Though Witches might be fundamentally the same, no one Witch is the same, each possessing their own abilities, minions, and trippy pocket dimension. The most notable Witch she fought was Walpurgisnacht, a witch that was powerful enough to telekinetically pick up entire buildings and tank bombardments from Homura's vast arsenal, though all of her battles against Walpurgisnacht always ended in Madoka dying or becoming a Magical Girl and in turn a Witch.

Spirits have excited in the human world for 30 years at the start of Date A Live, so Kurumi has been around for a little shorter than that. During that time 10,000 people (not including spacequake victims), though most of these were helpless victims. She also fought the Anti Spirit Team (a highly advanced branch of the Japanese Self-Defense Forces) who are specially trained to fight spirits, raided Deus Ex Machina Industries (a company that supplies the AST with their high tech weapons), and briefly clashed with Kotori Itsuka, a fellow Spirit.

Homura is willing to use lethal force against those who stand in the way of her saving Madoka, she is shown to have a merciful side like when she chose to shoot Mami's kneecaps instead of destroying her Soul Gem.

Kurumi frequently kills defenseless humans, though this is because she is forced to devour their time in order to survive and does seem to prefer to target people who can be considered despicable, such as rapists and animal abusers. Still, doesn't stop her from toying with them and taking in what seems to be an almost sexual joy in their deaths. She also doesn't mind killing her thinking, feeling, clones should they disobey her.

During her battle with Walpurgisnacht Homura has shown to make clever use of traps. Forcing the Witch into a corner before activating some remote explosives in the hopes of bringing it down. She also has show outside the box thinking during her fight with Mami, shooting herself in the head to make Mami panic and cause the bullet she fired to break the ribbon they were connected to.

Kurumi mostly seems to rely on brute force to achieve victory, overwhelming her enemies with her time bullets and the sheer number of clones.

Having lived through countless of timelines constantly failing to save her best friend while seeing her other friends die while fighting nightmare creatures obviously has taken its toll on Homura. But despite her obsession over saving Madoka, even against Madoka's own will, Homura is still capable of thinking straight and remaining calm in stressful situations.

Kurumi obviously isn't all there. She enjoys killing and harming other people, and disposes of her temporal clones as easily as one would any a defunct tool. As seen in her fight against Kotori, she also panics and breaks down when she thinks she is on the losing side.