Battle of the Legates: Joshua Graham vs. Lanius

Joshua Graham, formerly known as the Malpais Legate, and in folk legends as the Burned Man, is a Mormon missionary, acting war chief of the Dead Horses, co-founder of Caesar's Legion, and its first Legate. Originally a friend of Edward Sallow, later known as Caesar, Joshua acted as his top general. Though Joshua was against the Legion's cruel acts in principle, he justified it to himself as making the best of a bad situation and doing what needed to be done. After the failed First Battle of Hoover Dam, Joshua was covered in tar, lit on fire, and thrown off a canyon as punishment for his failure.

Miraculously, he survived and made his way back to his hometown of New Canaan, where he was welcomed back with open arms. Humbled by his failures and punishment, his belief in the Mormon faith strengthened. One day while he was away from home, a tribe aligned with Caesar's Legion attacked and razed New Canaan to the ground, with the survivors being scattered into the wild, most of whom would settle in Zion Canyon. To defend them and the tribes that made their home in the canyon, Graham assumed the position of acting war chief among the Dead Horses, while Daniel, another missionary and survivor from New Canaan, joined up with the Sorrows. 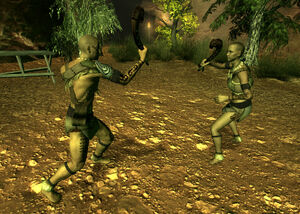 The Dead Horses are a tribe living in Zion Canyon. They inhabit Dead Horse Point and are descendants of refugees from the town of Res. The Dead Horses are noted to be great hunters and scouts. A child is usually considered an adult and will receive his first tattoo, after completing their first hunt and experienced scouts often leave chalk drawings behind to guide their fellows towards good hunting grounds or warn them of danger. They also possess a deep respect for the nature around them.

Joshua once visited the tribe when he was still a Legate. During his second visit, New Canaan had fallen and Joshua was a changed man. He quickly proved himself to the Dead Horses and swiftly became their war chief, turning the tribe into a formidable fighting force, even convincing a large portion to move to Zion Canyon to help the Sorrows. Despite being their war chief, Joshua prefers to let the Dead Horses make their own decisions when it comes to social affairs, believing there are better men than him they should look up to. 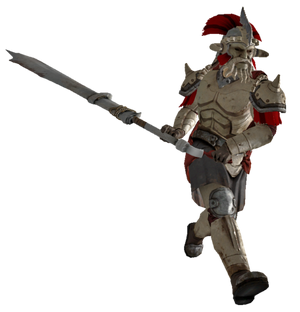 Lanius is the Legate of Caesar's Legion and Caesar's right-hand man. He replaced Joshua Graham in this role after the defeat during the First Battle of Hoover Dam and led a campaign of expansion to the East. During his campaign, Lanius became well known for his brutal yet effective tactics, leading him to be known as the Monster of the East or Terror of the East. Little is known about Lanius' past, as it has been purposefully shrouded in mystery to maintain his ruthless image.

Some say that Lanius was a warrior of the Hidebarks who turned on his tribe after they dared to surrender. During the battle, the man that would come to be known as Lanius killed 15 of his warriors before being subdued, being scared in the process. He was found by the Legion and Caesar, recognizing the warrior's potential, offered him a chance to take revenge on the Hidebarks for their betrayal if he became his new Legate. An offer Lanius took. Others suggest he was born into slavery but earned his freedom in the arena at the age of 12 by never losing a fight before climbing the Legion hierarchy. 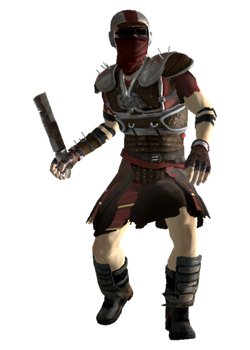 The legionaries form the backbone of Caesar's Legion. Most legionaries are born into the Legion and indoctrinated at a young age, though some are warriors of defeated tribes who have submitted themselves to the Legion to survive. Despite all of their skill in combat, the Legionary's true strength lies in their devotion to Caesar. They will gladly charge into certain doom if it means achieving victory for the Legion and fully believe in Caesar's divine destiny to conquer the wasteland.

Before meeting Edward Sallow (later Caesar), Joshua was a missionary coming from a relatively peaceful New Canaanite and thus likely wouldn't have received extensive military training. But due to the nature of the wasteland, the peaceful Mormons did train to defend themselves and New Canaanites had to undergo a rite of passage to earn a .45 Auto pistol, their favoured weapon.

Depending on which version of Lanius’ past you believe, the Legate either received a warrior’s training from the Hidebarks or honed his skills in the Legion’s fighting pits. Either way, Lanius was likely trained from a young age and took most of his lessons to heart as he went on to become one of the most skilled warriors in Caesar’s Legion has ever seen.

By the time of the First Battle of Hoover Dam, Joshua had been a Legate for 30 years and had been doing as such since the day of its founding. He would often lead his men into battle personally, giving them orders while being in the middle of all the action. After his defeat at the hands of the New Californian Republic during the First Battle of Hoover Dam and being thrown off the Grand Canyon, Joshua would return to New Canaan and help defend it against the White Legs and other hostile tribes before the settlement was razed to the ground. Afterwards, he took the role of the Dead Horses' war chief and continued to defend them fight back against the White Legs.

Depending on which version of his past you believe, Lanius either used to be a tribal warrior who fought against the Legion before being betrayed by his tribe or a slave who never lost a battle in the arena until he was a legionary. The fact that Lanius was made the new Legate after Joshua's failure at Hoover Dam suggests that he had proven himself a capable leader to Caesar. After his promotion, Lanius was tasked with expanding the Legion eastward, conquering 19 tribes in 10 years. Victorious, Lanius went back to the west to assist the Legion during the Second Battle of Hoover Dam.

The Dead Horses maintain offensive and defensive capabilities collectively but don't have a standing fighting force. Though they do train warriors for combat, they primarily act as hunters. The tribe also trains a special group as scouts, though they tend to be used for more practical things such as exploration and locating game. Joshua seemed to have introduced his training regiment to the Dead Horses as they use .45 Auto pistols. If Joshua also taught the Dead Horses some Legion techniques isn't known.

Legionaries are inducted into the Legion at a very young age. First, they are trained not to think for themselves and blindly obey their superiors, removing any doubt from their mind. Next legionaries are put through a physically demanding training regiment, building up their resistance to pain, training with melee weapons, and getting them into peak condition. If a legionary proves himself especially capable, they receive additional training in how to use firearms.

The Dead Horses are for a large part hunters and start doing so at an early age, with the large mutated goat species known as the bighorners being their most common prey. Dwelling in Zion, they also had to contend with its wildlife which includes the giant flying cazadore bugs, mutated geckos the size of dogs, carnivorous venus fly traps, giant mantises the size of cats, and the mutated yao guai bears. Due to the nature of the wasteland, it is likely they also had to defend themselves against raiders and enemy tribes. The only known offensive campaign the Dead Horses went on was against the White Legs.

Legionaries usually start their career when they are but children to get them used to a life of warfare. Most of the Legion's enemies include tribes and small settlements which resist their rule. So far the only enemy that has managed to match Caesar's Legion is the NCR, who successfully pushed them back during the First Battle of Hoover Dam. Skirmishes between the two powers are common. Besides conquest, legionaries are also expected to guard towns, settlements, and roads that are in Legion control from raiders.

The Dead Horses regard Joshua with almost religious reverence and fully trust him as their war chief and spiritual advisor. He is the man who saved the tribe from destruction and allowed them to carve out their own destiny. Should Joshua die during the events of Honest Hearts, the Dead Horses name the manifestation of the land, a hard spirit of divine justice, after him. Should he survive, then the Dead Horses would protect the New Canaanites in his honour, further speaking of the amount of reverence towards him. Furthermore, the Dead Horses have an ingrained duty to protect their home and help their fellow tribesmen.

Legionaries are indoctrinated at a very young age and worship Mars as their god and Caesar as his divine authority on Earth. They are not to think for themselves and obey the orders of their superiors without question. Lanius especially hold great sway over the Legion, being chosen by Caesar to lead his armies. Every legionary is well aware of his reputation as Monster of the East and there are many legends on how Lanius came to be the new Legate. To defy Lanius' orders is to invite the wrath of Mars upon one's self.