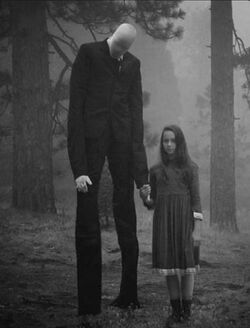 The origins and much of the Slender Man's history are a mystery, though the stories date back to ancient Egypt and can be found all over the world. These stories always featured a pale, faceless, man dressed as a nobleman or a member of the aristocracy that preyed upon innocent children and left madness in its wake. These stories are regarded as nothing more than folktales, however, nothing more than cautionary tales to scare children into behaving or to scare one's friends while sitting around the campfire. Even today you can find stories of the Slender Man on various internet forums written by amateur writers with a fascination for horror. But be warned, they say that the more you take an intrest in the Slender Man the more he takes in intrest in you. So lock your doors and close the curtains if it makes you feel safe, but that sooner or later he comes for you. 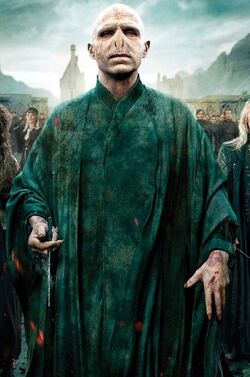 Tom Riddle, later known as Voldemort, was one of the most powerful Dark Wizards to ever exsist. Concieved under the effects of a love potion, Riddle was unable to feel love or affection to his fellow man. Like many British wizards, he attended Hogwarts where his charisma and skill with magic earned him the admiration of both the student body and the teachers. He eventually learned of Horcruxes and grew obssed with achieving immortality, creating his first Horcrux when he was 16 and with it took his first life. After graduating, Riddle discarded his 'muggle name' and renamed himself Voldermort. Despite being a half-wizard, he started to believe that only pure blooded wizards should be allowed to use magic and that they should rule over non-magical humans. Though Voldemort came close to conquering the wizarding world, his physical body was destroyed when trying to kill Harry Potter, the boy prophesied to slay him. Even when he regained his physical form, Voldemort was unable to stop the prophesy from comming to pass and was ultimately killed for good.

Slender Man has existed for over a thousand years, but usually fought against humans that are unable to fight back or do not have the means to properly harm him. Sometimes he relegates fighting to his human proxies, but is more than willing to step in himself if they aren't enough. That is as far as Slender Man's known fighting career goes. Honestly, there is not a lot to go off.

Voldemort first attended Hogwarts when he was 12 and it is likely that his classes included Defense Against the Dark Arts and Dueling (as far as classes that relate to combat), though he also experimented with magic on his own, and started to kill when he was 16 to create the six horcruxes. When he was 44, Voldemort kicked off the First Wizarding War, leading his Death Eaters against the British Ministry of Magic for about 11 years. It has been implied that he dueled Albus Dumbledore during that time and likely personally lead his followers in a couple of battles, though knowing his ego he probably only did so on battle he personally considered to be important. After his physical body was destroyed, Voldemort had to lay low and do nothing for a while before he finally returned. During the Second Wizarding War, he lead the Death Eaters against the Order of the Phoenix, fought Doumbledore again, and finally commanded his troops during the Battle of Hogwarts, during which he finally got killed by Harry Potter.

Slender Man tends to stick to the shadows, silently stalking its prey and using its telepathic powers to make them paranoid, and waiting for the right to strike. When dealing with groups of people he tends to turn them on each other by subtly making use of his telepathy, scarring them by more conventional means, or allowing one of his proxies to infiltrate the group. Its also worth noting that despite having existed almost as long as human memory that Slender Man is able to hide its existence well enough to be considered just a myth.

Voldemort has been the mastermind behind both wizarding wars and narrowly won both of them. He also has shown to be an amazing duellist and has been described as unpredictable and being able to fluently switch duelling styles mid fight. He was even able to push back against Minerva McGonagall, Kingsley Shacklebolt and Horace Slughorn (who were masterful duellists themselves) and manging to defeat all of them at once. Thus far only Dumbledore has been shown to be his match. He has shown to have a temper though, which could lead him to make rash decisions, like using the Elder Wand despite knowing it is not loyal to him wich ultimately lead to his demise, and has an equally large ego, viewing himself as the most powerful wizard in existence and refuses to do certain tasks if he doesn't view them as worthy of his attention, though he has shown to be capable of acknowledging his mistakes.