Superheros, don't you just love these overpowered basterts in weird costumes that stand up for the commen man and for whats right? If so, then you're in for a treat, beceas today I am pitting two of the most overpowered superheros from east and west against each other. Saitama: the Caped Baldy who is able to defeat every oppenent with just one punch vs. Superman: the Man of Steel and Lost Son of Krypton, who stands for thruth, justice and the American way. Both of these heros are the most powerfull heros in their universes, but only one can be the DEADLIEST WARRIOR! 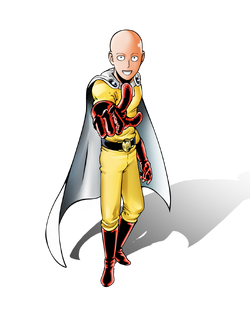 Saitama used to be a normal, down on his luck kind of a person who had a hard time finding a job, until he saved a (rather large chinned) boy who was being attacked by a crabman, who was mad at the boy because the boy drew nipples on him while he was sleeping.

After this event Saitama decided to train to become a hero. He eventualy achived his goal by doing 100 push ups, 100 squads, 100 situps and a 10 km jog every singel day. This 'intence' strenght training somehow granted him the strenght to defeat every oppenent he meets with only one punch (and also turned him bald).

As a consequence of this training regime and special one-punch superpower, however, he has drawn criticism and ire from both the Hero Association and the public - the former out of jealousy and envy due to his fame and credibility; the latter because of Saitama's lack of heroic nature and charisma in battle (e.g. his lack of concern for property damage). Furthermore, Saitama always feels bored and empty and longs for an opponent who will actually pose as a great challenge for him. Despite this pessimism, Saitama has a strong moral compass and his lack of desire for fame allows him to make better decisions when facing opponents.

Immeasurable strength: Saitama's strenght is almost seemingly limitless, being able to kill the strongest monsters and aliens that S-class heros have troubles with defeating with a nonchalant punch. The only people who survived a punch from Saitama are humans and Boros (the former becease he dosn't want to kill humans and the latter becease of a mix of Saitama wanting him to give a good fight and thus holding back and his high duribility). Just the inpact of Saitama's strongest punch is able to tear a hole in a mountain and seperate the clouds. His superhuman strenght also allows him to leap great distances (such as from the moon to the earth).

Immeasurable speed and reflexes: Saitama is fast enough to easily keep up with Sonic (a ninja who can run at super sonic speed), run up and down a building and compleet a 1500 km sprint in a matter of seconds. He can also run so fast that he leaves after images.

Extraordinary senses: Saitama is able to hear people from a long distance away and can see Sonic who is so fast that he can't be seen by the naked eye. Saitama also seems to posses some sixth sense that allows him to dodge attacks with out seeing them comming.

Invulnerability: No charecter in the anime was ever able too ever injur Saitama. He has taken blund damage, survived a giant fire ball, a punch that launched him all the way to the moon, the vacum of space, various punches from a giant man who claimed to be the strongest man on the palnet, and was hit by an entire city during is fight with Tornado and was stilll entirly unharmed after all of those things. 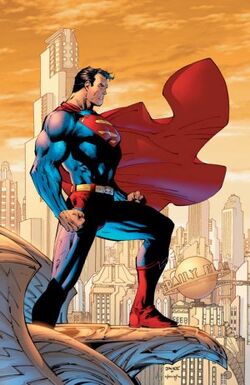 With the planet Krypton dying and no way to save it, the scientist Jor-El and his wife Lara-El decided to save their infant son Kal-El by putting him in a rocket and sending him to planet Earth. When baby Kal-El arrived he was discovered and adopted by the Kents who decided to call the little baby Clark and treated him as if he was their own son.

When Clark grew up he discovered that the Earth's yellow sun granted him various superpowers, such as superhuman strenght and x-ray vision. Deciding too use these new found powers to protect the people of Earth Clark adopted the identety of Superman.

During his time as an superhero he defended the city of Metropolis and Earth against invading aliens, monsters, criminals, mutants, super vilians, ect.

Nigh-invulnerability: Superman's body is nigh-invulnerable due to his superhumanly dense cellular and anatomical structure. He also posses an bio-electrical aura around his body that acts as an invisible "force field" radiating within a few millimeters from his skin. Superman is under some circumstances resistant or immune to different forms and levels of lacerations, blunt force trauma, energy-based assaults, falls from great heights, explosions, and the cold void of space.

Flight: Do I really need to explain this?

Superhuman speed and reflexes: Superman (while not as fast as the Flash on the ground) is able to fly faster then the speed of light and is able to catch bullets out of midair.

Superhuman senses: Superman is able to hear things from great distances away (even through the vacum of space), has superhuman smell, micro and telescopic vision, x-ray vision and thermal vision.

Healing factor: Superman has an accelerated "healing factor" enabling him to heal almost instantaneously from most wounds.

Super-breath: Superman is able to create hurricane force winds by blowing or freeze an oppenents.

Heat vision: Superman is able to shoot fire beams of intense heat from his eyes. These beams can be focused on a micro scopic level to an huge blast.

Saitama and Superman aren't people who go around killing random people. However, Saitama frequently one shots monsters to death without a second though, while Superman prefers no to kill and only kills if it's absolutly nessecry.

Saitama has bin fighting for quite some time, even before he got his superpowers. But most of his fights 9if you can call them that) end up and start with Saitama punching a monster and killing it. Superman on the other hand has bin fighting various threats for years and has bin in more fights that wern't as one-sided.

Saitama lost all exitment in fighting and it really show. For exmaple when he was fighting Carnage Kabuto he was more worried that he would miss the sales at the supermarket and when Boros was powring up he just responded with an unintrested "Ok.". Supeman also manges too keep an cool head, but is still feels anger stress and other emotions.

Saitama isn't anything special in the intelligence part and has only a 4/10 in the scan Genos did on Saitama's stats. Superman on the other hand is a freakin genius, being able to create robots, work with alien tech and comming up with tactics for a battle.

I decide what votes count and wich don't. Thats all.