Gilgamesh: The King of Heroes

Loki: The God of Mischief

Gilgamesh, also known as King of Heroes, Oldest King and Archer, was born from a unoin between the King of Uruk, Lugalbanda, and goddess Rimat-Ninsun. He ruled the Sumerian city-state of Uruk, the capital city of ancient Mesopotamia in the B.C. era. He was an ultimate, transcendent being so divine as to be two-thirds god and one-third human, and no others in the world could match him. He was a despot possessing high divinity who believed he was invincible. He is not merely a legend, and is said to have actually existed and ruled during the Sumer Dynasty five thousand years ago. He was the King of Heroes who possessed all things in the world, whose tale is recorded in mankind's oldest epic poem, the Epic of Gilgamesh which portrays Gilgamesh as a hero, destined to be king and achieve great feats, who is driven to meet his destiny, facing challenges together with his best friend Enkidu. Years after his death, he was summoned as a Archer-class Servant by Tokiomi Tohsaka to serve him in the Fourth Holy Grail War.

Ea: Sword of Rupture, Ea is Gilgamesh's personal "sword" and the strongest Noble Phantasm within the Gate of Babylon. While it's technically an sword it can be used in the same way as one. Ea can also unleash an powerful attack called Enuma Elish: The Star of Creation that Split Heaven and Earth, wich sends out an powerful energy blast. While it can (at it's strongest) destroy an world, Gilgamesh only uses it full potential while in an Reality Marble (pocket dimension) and uses an way weaker, but still powerful, version against other servants. Endkidu: Enkidu: Chains of Heaven is Gilgamesh's most trusted Noble Phantasm, even more so then Ea and is named after Gilgamesh's closed friend. Gilgamesh uses it by summoning it from the Gate of Babylon after wich the spikes of the chain shoot towards the targets limbs trying to impale them. After this is done the chains wrap then wrap themselves around the targets, arms, neck, legs and torso, rendering them inmoble. Endkidu also gets stronger depending on the opponent. For example, to humans it's nothing more then an strong chain while to gods it's impossible to get out of. Superhuman Strenght: While Gilgamesh is not an upclose fighter he thos seem to be just as strong as Berserker or Saber, and is able to effortlessly pick up an human with one hand. Gate of Babylon: The Gate of Babylon: King's Treasure is Gilgamesh's tirth Noble Phantasm and allows him to open an "invisible dore" to his treasurers and weapons. With this NP Gil is able to access his weapons, shooting those weapons out of it, using it as projectiles and even summon other heros Noble Phantasms. Since there are to many weapons within the Gate of Babylon click here to see the full list.

Independent Action A+: Gilgamesh can remain in this world indefinitely even without a Master. The support his Master (Kirei Kotomine) is unnecessary even while unleashing a large amount of Magical Energy. Magic Resistance E: Gilgamesh's magic resistance is only strong enough to reduce the damge done by magic attacks. Superhuman Speed: Gilgamesh is quik enough to keep up with Saber, who is able to run at the speed of thought. Knowledge of Magic: Despite not being an mage of any kind Gilgamesh seems to know a thing or two about magic. When he fought Caster, Gil knew how to counter her magical attacks and see through her illusions. Golden Armor: Gilgamesh wears golden armor wich is made of magic energy. It's strong enough to withstand numerous blows from Saber, witstand Saber's Exilibur, Noble Phantasm and take it's from an low powered Ea, it also protects him from magic. Superhuman Durability: Even without his armor, Gil i able to take hits from heavy hitters like Berserker.

Gilgamesh posses an huge ego and sees other as lesser and weaker as him. This makes him act cocky and over confidned and allowed several characters in the Fate series (such as Shirou, Saber and Berserker) to take him by surprise or even defeat him. He also dosn't use his strongest weapons if he doesn't take his opponent serious enough. And despite his large arsenal, he isn't that good of an up close fighter, and someone with the sword skills of Sabre could easily defeated him when it comes to an up close sword fight, if it wasn't for his Noble Phantasms. 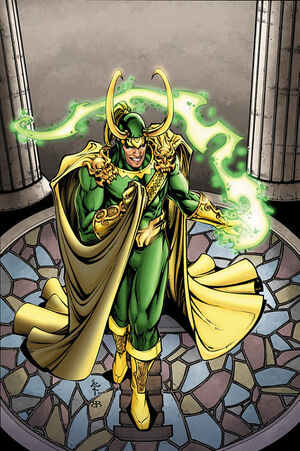 The son of the king of the frost giants, Laufey, the young Loki was hidden from giant society because Laufey feared he would be mocked for his size. Laufey and many of his subjects were killed in battle with the Asgardian ruler, Odin, who found Loki and took him in as his own son, as a sign of respect to a fallen king.

Loki grew jealous of his foster brother, Thor, resenting the hero's strength and valor, which were respected by the Asgardians. Loki himself studied the arts of magic, coming to be one of the most powerful sorcerers in existence. As the god of mischief, Loki often pulled tricks on his brother or the other gods. These pranks grew more malign over time, until Loki caused the death of Balder, the cherished god of light. Loki was exiled from Asgard for this crime, imprisoned within a tree until someone shed a tear for his plight.

Thanks to more trickery, Loki eventually escaped, attempting to kill his now-hated brother and rule the gods. Loki's works were fated to lead to Ragnarok, the end of Asgard. However, again thanks to Thor's efforts, the gods were eventually restored, including Loki, who continues to wreak havoc upon both Asgard and Midgard.

Magic: Being the God of Mischief, Loki is the most skilled magic user in Agard and can use his magic to do various things, he can temporally enhance his physical attributes, use telekinesis, create powerfull beams, create force fields, teleport, hypnotize poeple, and shape shift. Superhuman Strength: Like all Asgardians, Loki posses superhuman strength and is able destroy an small building in one punch. Surtr: Surtr is an burning blade that Loki can summon at will. It is strong enough to cut through an normal sword and powerful enough to knock Thor on the ground.

Superhuman Stamina: Like other Asgardians, Loki posses superhuman stamina, he is able to exert himself for 24, before getting tired. Superhuman Durability and Dense Tissue: Loki is durable enough to fall from great highest, take shots from high caliber bullets, and is able to withstand an blast from Mandarin's Rings. Healing Factor: Being an Asgardians, Loki is able to regenerate faster then an human being. Through the use of his sorcery, Loki's ability to heal himself is far above that of other Asgardians. Superhuman Speed: Loki is quik enough to dodge Mjonir and move at the speed of thought, but only seems to use this power to dodge attacks and catch up with opponents.

While Loki is an powerfull mage, his magic seems to be weaker on Midgard (Earth) and while he has psionic powers, Loki can not directly read the minds of other beings, nor can he control their actions. And just like Gilgamesh, Loki's arrogance uselessly results in him getting defeated.

IntelligenceBoth warriors aren't stupid and are both cunning and smart, but Gilgamesh never displayed any tatics beyond spamming the Noble Phantasms within the Gate of Babylon. Loki on the other hand is known for his cunning plans, tactics and despetoin.

Before Gilgamesh became an Heroic Spirit he went on many adventures with his friend Endiku and killed many divine beast such as the Bull of Heaven and even ventured into the underworld in the search for immortality. Loki on the other also fought various Godly creaters such as Surtur and fought the strongest heros in the Marvel universe.

Despite Loki's cunning, magic and intelligence, Gilgamesh took the win, becease of his large amount of weapons within the Gate of Babylon, the power full blasts Ea can create, and Endiku (wich was specifically meant to keep gods in place).