Panty and Stocking: the angelic Anarchy sisters who protect Daten City from ghosts and demons. 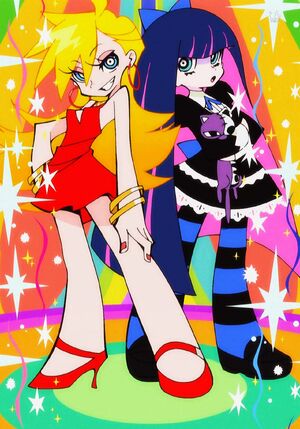 Backlace is a spirituel semi-automatic pistol that Panty obtains by transforming her, well, panties. Backlace can only harm ghosts, demons and other angels. Backlace's ammo is seemigly infinite ammo, most likely becease the ammo of Backlace depends on the orgasim limit and since women have no orgasm limit there is also no limit to Backlace's ammo. When duel wielding two Backlace's (thanks to Stocking giving Panty her panties) Panty can tranform it into a SMG and a sniper rifle , but she rarely thos this and seems to prefer the pistol versoin of Backlace.

Stripes are two spirituel katanas Stocking abtains by transforming her stockings. Just like Backlace, Stripes can only harm demons, ghosts and angels. When duel wielding Stripes, Stocking can attache them at the base of the hilt, to attack in a similair way how helicoptor paddles works. She is extreamly skilled with them and is abel to create razor sharp engry waves with them.

Both (being angels) posses the power to fly and seem to be in peak human conditoin. Panty is the strongest of the two sisters and is abel to use pretty much every firearm there is, but prefers her pistol Backlace, becease she dislike the smell of gunpowder. Panty is also a skilled at hand-to-hand combat. Stocking is the more skillfull of the two and it shows in the way she uses Stripes. She has also superhuman reflexes so quik that she is abel to reflect bullets back at the person who shot her using Stripes. 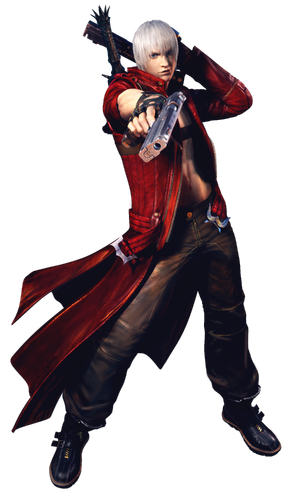 Ebony and Ivory are two duel M1911 semi-automatic costum pistols modified so that Dante can to rapidly fire bullets instilled with his demonic power. While Ebonyis modified for comfort and long distance shooting Ivory is modified for rapid firing and quik draw times. 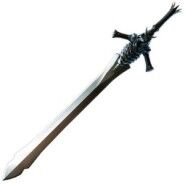 Rebellion is big magic double edged broadsword and a physical manifestatoin of Dante's power. He is higly skilled with it, and is able to preform a number of combos with it.

Dante posses superhuman speed, strength, duribilety. He is strong enough to break stone and move fast enough to make it look like he is teleporting. He is also durible enough to witstand blows that could kill a normal human. Lastly when Dante activates his Devil Trigger he amplifies these powers even further.

Dante is an experienced player in the business of hunting and slaying demons. Having been able to fight and kill them on a normal basis ever since some time around his 8th birthday. Due to the years upon years of experience, Dante portrays no fear when fighting or being swallowed by enemies and of course escaping said situation, his experience has also granted him the attention of some of the most powerful demons in existence, which he manages to beat single handily almost all the time. Panty & Stocking, on the other hand are not strangers to all the things that go bump in the night. Due the odd circumstances, these two typically fight massive demons on a normal basis and the occasional high-ranking member of Hell. Due reactions based upon the battling of demons, it can be assumed that both have been in the businuess for a while to the point where it feels like busy work. Much like how Dante has gotten bored with fighting weak demons and has seeked out stronger ones to battle

Dante is a great marksman, even when going at astounding speeds that the human eye thinks he's teleporting, his aim is always true. Capable of loading his targets with plenty of rounds and still keep up a quick pace. Panty, the main marksman of the group doesn't have any really gleaming moments of her being an amazing marskman besides one, shooting a bullet with a bullet by using sniper modifcation to protect someone.

This is actual relatively easy to choose due to the fact that Panty & Stocking, despite their appearances are much more brutal than Dante. Dante can be an asshole, but will do his best to avoid civilians deaths. Panty & Stocking, on the other hand, are much prone to letting an entire city get destroyed or countless civilians dying in order to get to their objective. That and the two tend to be get angered quickly over simple things and will maim anyone who said the insult.

While this was close, Date won becease of his demonic abilities and more expiriance due to an wider variety of enimies he had to fight. The experts also pointed out that while skilled, Panty And Stocking tend to be clumsy sometimes and don't always work well together.