Since the dawn of man there has bin a battle between good and evil, day and night, light and darkness. Today, we are putting two warriors against each other, one that repisents, light, justice, and mercy, and a warrior who repisents darkness, selfishness, and bloodthirst. Jonathan Joestar: The Ripple user on a quest to defeat his adoptive brother Dio and avange his father vs. Dracula: The evil Count, who feeds of the blood of the innocent. WHO IS DEADLIEST!? 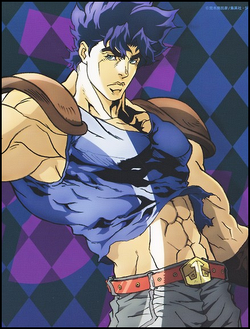 Jonathan Joestar, known to his friend and family as JoJo, was born into a wealthy family and lived a happy life until Dio Brando came into his life. Jonathan's father, George, was indebt too Dio's father Dario, who recently died due too sickness. Dio, desiring the Joestar inheritance, tourmented Jonathan, even forcing a kiss on his girlfriend Erina, effectively isolating him during his childhood.

Years later when both Jonathan and Dio were young men, Jonathan discovered Dio's plan to pioson their father. After exposing him to the police Dio attempted to kill Jonathan and activate a vampire creating mask in the process, George threw himself before Jonathan, and died in the process. While Jonathan griefed over his father, Dio activated the mask, and turned himself into a vampire. Dio killed the police who were at the scene and tried to kill Jonathan, only for Jonathan to inpale him on the family statu and let him burn in the flames created during the conflict. A few days later a man by the name of William A. Zepeli revealed Dio was still alive and offred Jonathan to train him in the use of Ripple, an energy similair to that of sunrays. Jonathan took the offer and weant on a journy to kill Dio once and for all. 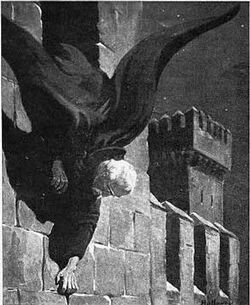 Count Dracula, is a Székely descended from Attila the Hun and former soldier. In his youth Dracula practiced alchamy and the black arts eventualy becoming proficient in both subjects. Using the dark arts, Dracula brought himself back to life as an vampire. In the 19th century Dracula creates along plan to move himself from his scarcely populated land of Transylvania to the United Kingdom, where no one knew him and where he could savely hunt. After ariving in England and infecting Lucy Westenra however, he gained the attention of a group of people wishing to stop his evil.

Jonathan has bin fighting zombies and vampires for months until he sacrificed himself to save the passengers on a travling ship from Dio who survived being beheaded. (Highlight to see spolier). Dracula on the other hand has lived for centuries fighting against the people that hunt him as a vampire, and fighting the Turks as a soldier.

Jonathan learned how to use the Ripple from Ripple master William A. Zepelli during their travel to Dio's lair. Often being trained by him on the fly while fighting the undead zombies (such as Jack the Ripper) and vampires Dio sent after them, along with Eastern martial arts. Count Dracula presumebly received military training when joining the army to fight the Turks.

Jonathan only uses lethal methods when necessary, and dosn't go all out on someone unless they are irredeemable. Dracula kills inocent people all the time when he is hungry for blood, or gets in his way.

Jonathan got the best education available during his time, and published a book archeology. He also leanred alot about vampires, the Stone Mask, and Ripple from Zepelli. Lastly he seems to be a quik thinker, such as seen in his under water fight with Buford when he swom down and breathed in a pocket of air instead of going up where he could be dragged down. Dracula presumebly also got good education and studied dark magic, aswell as alchamy. He is also good at making long term plans, such as his plan to move from Transalvania to the UK.

Jonathan often displays a great deal of self control and tend to keep a cool head (as seen when Dio first transformed into a vampire and killed an entire police squad). Dracula while normally calm and collected, can get annoyed when his plans are being thwarted, and once assaulted one of his vampire wifes attempted to seduce Harker, he angrly assaulted her.

Dracula achieved his goal of moving to the United Kingdom and began hunting human. Jonathan, getting word of the disappearances fears that an other vampire has apeared and gathers Speedwagon, Tonpetty, and his students to track down the vampire who did all this. Eventualy ariving at the castle Dracula resides in he gets seperated from his allies and is forced to confront Dracula alone.