Computers, we all love them and everything it brings to us, networks, vidoegames, programs and more. And today we put two warriors against eachother who give the term "keyboard warrior" a whole new meaning. Kirito: The Black Swordsman who saved the lives of thousands of players from the SAO death game vs. Neo: The One, who saved humanity of the Matrix. Both of these warriors fight in computer simulations and are very agile, but only one can be the DEADLIEST WARRIOR! 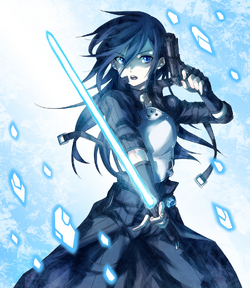 After saving thousands of players in Sword Art Online and exposing Sugou Nobuyuki to the police in ALfheim Online, Kirigaya Kazuto, known to his friends and in VRMMORPGs as Kirito, was asked by the Net Crimes Division to investegate a series of murders related to a player who calls himself Death Gun, who kills people in the game Gun Gale Online, afterwich they die in real life. Kirito accepted the offer and joined GGO to expose Death Gun and reveal his true identity.

The Kagemitsu G4 is Kirito's main weapon in GGO. It's 19.8cm long and is lighter then the swords Kirito is used to in other games. Kirito uses it as an melee weapon and to block bullets (it functions the same as a lightsaber), with Kirito's past expiriances in ALO and SAO he is able to wield it with great skill. However, the Kagemitsu has it's downsides as it's able to overheat and run out of energy. He uses this in combination with the FN Five-seveN. 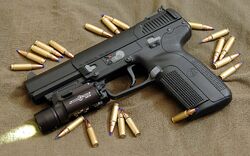 The FN Five-seveN is a Belgian semi-automatic single action pistol that uses 5.7x28mm caliber bullets, has an capacity of 20 rounds and an effective range of 50m. He uses this in combination with the Kagemitsu.

Game logic: Since Kirito just controls an ingame avatar in a virtual reality game he won't actualy feel pain, just a feel a tingling sensation. He is also unable to bleed. Tho explosions can still create headaches and dizziness.

Bullet Lines: Bullet Lines is a game mechanic in GGO that allows the player to see which path the enemy bullets will take with red lines.

Superhuman agility: Kirito's avatar in GGO has great agility, being able to do flips and leaps to dodge bullets.

Peak reflexes: Acording to to Kayaba Akihiko (the creator of SAO) Kirito had the best reflexes of all the players in SAO, and it shows in GGO where he cobines his reflexes, agility, Kagemitsu and Bullet Lines to block and dodge bullets.

Swordsmanship: Having years of expiriance in SAO and ALO, Kirito has developed great skill with swords. 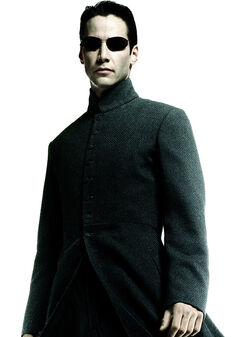 Thomas A. Anderson, also known under the alias of Neo, was a hacker who sold contrabanded programs to people who would offer the right price. At some point in his life Neo felt that something wrong was wrong with the world, but couldn't put his finger on it. In his research about something called the "Matrix," Neo began to search for a man named Morpheus, concidered by some as one of the most dangerous men alive. Neo eventualy found Morpheus who revealed to him that the world as he knows it was nothing more then a computer simulation made by the machines who use the Matrix to keep humanity ignorant about the real world so they could use the humans as computer processors (I know in the movie they said batteries, but I am going with what the Wachowskis originaly had in mind, becease it makes more sense). Neo escaped the Matrix and worked together with the human resistance to fight the machines, both in the Matrix and real world 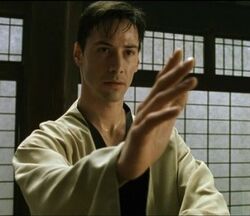 Neo got sevral combat programs downloaded into him giving him the expiriance of a martail arts master with decades of experience. Known martail arts he has at his disposal are: Kung Fu and Kempo styles, Jujitsu, Karate, Eskrima, Drunken Boxing, and Taekwondo. 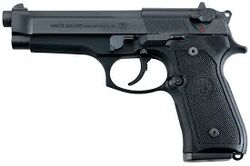 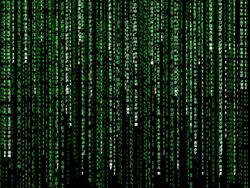 Note: I know that Neo has more powers then this (telepathy, flight, control of the Matrix, ect), but I am using Neo before his final fight with Agent Smith in the climax of the first movie, becease otherwise Neo would be too OP

Superhuman strenght, agility and reflexes: Neo is strong enough to send a person flying with a single punch, agile leap far distances and do acrobatic stunts during combat, and dodge bullets

Kirito has bin playing VRMMORPG's for years, with being trapped in the SAO "death game" for 2 years, fight monsters and other players. However, he lacks expiriance with shooter games such as GGO, since he has bin mostly playing fantasy games like SAO and ALO. Neo has not bin fighting aslong as Kirito and has bin only fighting normal people he is forced to fight within the Matrix and the superhuman Agent programs. (Again, note that this is Neo before the climax of the first movie.)

Kirito dosn't have alot when it comes to training since most of his skills are selftought. Neo has bin tought by Morpheus how to use his kung fu skills aswell teaching him the ways of the Matrix.

Kirito is by no means a killer, just a kid who likes to play some MMOs. Even when he was forced the kill an member of the Laughing Coffin (a "criminal faction" who kill people) it left an deep and emtional inpact on him. Neo on the other hand is willing to kill if that means getting the job done (as seen in a scene  where he and Trinity mow down various security guards (who were just doing their job) just to get to save Morpheus).

Kirito learned how to masterly use game mechanics by simply being shown what they are. For example: when first shown "bullet lines" Kirito learned how to predict where the bullet lines would end up in first time of trying it  (the Gary Sue is real (also Skully said to put this here: ∞, what a twat amirght? (troll)). Neo is also a fast adapter, tho it took some time before he was able to realise that "there was no spoon".

Thinking Neo needs a bit more training before he could save Morpheus, Trinity advices him to test his skills in a popular game in the Matrix called Gun Gale Online. Seeing a high-level player under the user name "Kirito", Neo decides he would make a good opponent, Neo goes on the attack.

Kirito deciding to train a little and gain some EXP before the Ballet of Bullets tourdement in wich he will confront Death Gun, Kirito go's into the overworld and PVP some other players. Just as he finished another player he encounters an player wearing a black trenchcoat and sunglasses who go's into the attack.

The usel stuff of clear grammer, good reason and non-bias.