Red: The Pokemon trainer who defeated the Indego Plateau who acended to Mt. Silver to train

Sophie Casterwill: One of the Huntik Foundation's finest Seekers due to her direct linage to Lord Casterwill

Today I'm letting my inner geek fly by finally doing a battle using a character from one of my favorite and lesser known animes, Huntik: Secrets & Seekers.  To match the similar 'creature summoning' theme,  I turned to Wandering Skull to give me a challenge by having her face Red, Pokemon's famous character.

This will be a 6-on-6 battle with one Pokemon/Titan fighting at a time and the last person with a usable summon will be declared the winner.

Sophie Casterwill and her Titans

After Sabriel sacrificed herself against the leader of the Organization, Sophie felt like a third wheel on Dante's team, unable to assist her fellow Seekers in battle once the Titans came out. When investigating the Island of the Casterwills, in a moment of panic and fear, she was able to summon Powerbonded Sabriel from her hand.

Red and his Pokemon 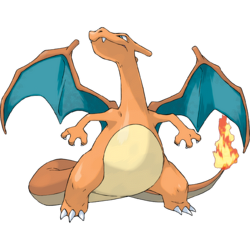 Charizard flies around the sky in search of powerful opponents. It breathes fire of such great heat that it melts anything. However, it never turns its fiery breath on any opponent weaker than itself. It is said that Charizard's fire burns hotter if it has experienced harsh battles. 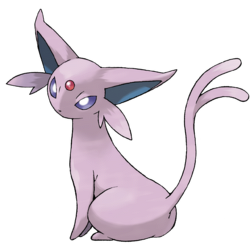 Espeon is extremely loyal to any trainer it considers to be worthy. It is said that this Pokémon developed its precognitive powers to protect its trainer from harm. By reading air currents, it can predict things such as the weather or its foe's next move. 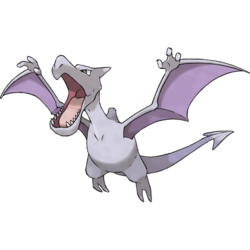 Aerodactyl is a large, bipedal Pokémon. Its head has two vicious eyes, pointed ears and a mouth full of serrated fangs. It has light violet-gray skin over much of its body, two pale violet membranes stretched between its arms and sides. Aerodactyl has plate-like spines going down its back, leading to its strong, triangular spade-tipped tail. Its talon-like feet are capable of scooping up, and tightly clutching any prey or victim unlucky enough to have Aerodactyl swoop down upon them. 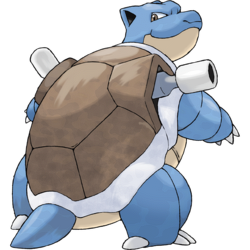 A massive tortoise-like Pokemon, Blastoise is the final evolution of Squirtle, most notable for the pressurized water cannons on its back. 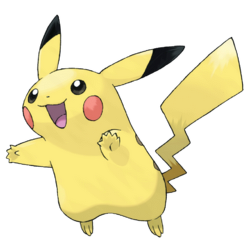 Pikachu is the Electric-type "Mouse" Pokemon. When several of these Pokémon gather, their electricity could build and cause lightning storms. It raises its tail to check its surroundings. The tail is sometimes struck by lightning in this pose. They are regarded as intelligent Pokemon 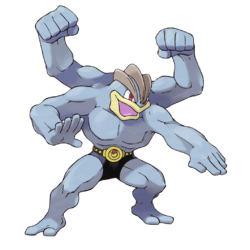 Machamp punches extremely fast, throwing five hundred punches a second. With only one hand, it can move a mountain. Because of its four arms, it can hit from a multitude of angles and pin all of its foe's limbs at once. However, it has poor dexterity, and cannot handle delicate work without its arms becoming tangled. It is a rash Pokémon that rushes into action without forethought. Machamp can be found living in the mountains. 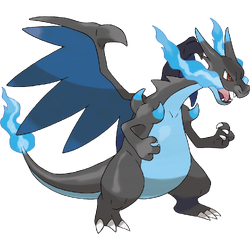 As the name implies Mega Charizard X is the mega evolved version of Red's Charizard. The mega evolution boosts the already strong capabilities of his Charizard to entirely new levels. Along with the boost in combat capabilities that increase Charizard's power such as durability and physical and ranged combat skills. Mega Charizard X has shown itself to be capable of beating Mewtwo even after sustaining injuries from its previous form alongside Red.

Titans: Two major factors for training when it comes to Titans are as follow: Titans for the most part never get rusty at combat or become out of shape, they keep at a solid baseline stats and are only overpowered by enemy Titans; secondly, Titans have been in existance since before recorded time as according to Hunitk lore.

Pokemon: Pokemon start at a level with stats and progressively get stronger after battling against other Pokemon, whether it be in the wild or at a trainer's side.  The higher the Pokemon is in it's evolutionary chain it is, the stronger and more training that pokemon has had.

Sophie: From birth, Sophie has been trained to be a Seeker due to her family name, but that couldn't have prepared her for when the Blood Spirals emerged and threatened to erase all of civilization.  It was evident that being forced into her family's secrets, while fun at first, did eventually stress her out such as when she was mastering the spell Findshape or when she took the test to replace her brother in the Casterwill Elders.  Both times though, she managed to rebound from the stress once she accomplished her goals.

Red: Being one of the greatest Pokemon trainers in existence was helped due to Red' ability to stay calm and collective during the course of battle. During his earlier time as a trainer, Red was more brash and let his emotions rule his ability in battle, but he became more experienced this changed. He became more strategically in his approach and more calm. He portrays a calm demeanor as he battles with trainers, even when facing a particularly tough opponent.

Sophie & Titans: As a member of the Huntik Foundation and Dante's team, she has been on the frontline of the Seekers collecting Titans from around the world, stoppping in Paris, Turkey, Greece, Atlantis, Prauge, and Ireland to just to name a few locations.  In these travels, Sophie and her Titans have faced the goons and higher ups of The Organization and The Blood Spiral, culminating with putting a stop to a powerful and ancient Seeker

Red & Pokemon: His journey has taken him to all sorts of new places and his challenges have all varied. Red's experience comes from wild Pokemon, countless trainers, Elite Four members, Champions and even on some occasions legendary Pokemon. He's battled and captured Mewtwo during combat albeit with difficulty and through his perseverance with Mega Charizard X & his own personal skill. Red and his team have about six years of experience under their belts.

Titans are ancient beings tied to the spirit world known as Huntik. Before recorded history, Lord Casterwill sealed the Titans into amulets in order to anchor them to earth so that he could call upon them to fight at his side, just like how modern day Seekers are capable of summoning them. While typically neutral in alignment, Titans are capable of being swayed by their Seeker's personality, as seen when the Titans owned by Vlad Dracul became impressed with his evil mentality. This may even cause some titans to refuse bonding to certain people if they don't match the personality of their previous owner. While Titans may very in skills, size, and shapes, they are classified into certain groups:

While the Titan typing system plays no effect into combat, I know that it wouldn't be fair if there wasn't someway to compare the Pokemon types to the Titans, thus I had to come up with Pokemon types for the Titans. Most cases, it was easy, such for the cases of Fighting, Steel, and Flying, and water, but some I feel might need explaining.

Since Aerodactyl's Ability, Pressure, is designed for Pokemon and their PP, but Titans don't operate on that. Instead, they can repeat an action over and over with no limits. To get around this, Wandering Skull has suggested that instead, Pressure causes the Titans to become more fatigued than usual, causing them to tire out much faster.

Sophie has set off on her own mission to Mt. Fuji/Mt. Silver to collect three Legendary Titans of Volcanoes, Thunder, and Auroras (Entei, Raikou, and Suicune).  Armed with her Titans, she travels up the mountain only to come face-to-face Red who stands between her and the Legendary Titans.  Locking eyes with her, Red starts a new battle...

Again, a very large thank you goes to Wandering Skull for helping me out with Red's information and putting up with me when I was being an ass about getting the battle ready to post.