Knights Hospitaller : Medieval tanks sworn to protect Christiandom from heathens and themselves

Sohei Monks: Buddhist warriors who took up arms to take on the Feudal lords

Two holy warriors, sworn to protect their religion, duke it out in today's episode of Deadliest Fiction.

nicknamed The "Religion", are a Christian military order established in the Middle Ages. Founded by a group of individuals in an Amalfitan hospital dedicated to St. John the Baptist in Jerusalem, the knights were initiated as a humanitarian movement dedicated in helping, caring and protecting pilgrims journeying to the Holy Land. During the First Crusade, the organization became a military unit by the orders of the Papal ministry. Their job was to defend the Holy Land and its Christian inhabitants from infidel tryning to raid or invade Christian lands. In the next century and the subsequent loss of Jerusalem, the Knights Hospitaller moved out and conquered Tripoli and Cyprus. When Pope Clement dissolved their rival, the Knights Templar, the Knights Hospitaller became one of the leading fighting force of the religion, conquering and setting up their new headquarters in Rhodes. They also set up orders throughout Europe such as Germany, Britain, Netherlands and others.

After the Crusades, the traditional armored knights were dissolved with the introduction of gunpowder, but the Knights Hospitaller still existed as a powerful force by now acquiring muskets and firearms mixed in with their traditional knightly armor and virtues. They fought in many battles and sieges of the Ottoman–Venetian War, such as in Rhodes, Tripoli, Preveza, as well as the infamous Siege of Malta, which was one of the greatest sieges in human history. They also colonized small parts of America, and during the Napoleonic Wars, they had a brief war with Napoleon, to which they finally lost Malta. Today, the Knights Hospitaller still exist as the Sovereign Military Order of Malta as a humanitarian and charity organization while even retaining their militaristic allegiance to the Papacy. 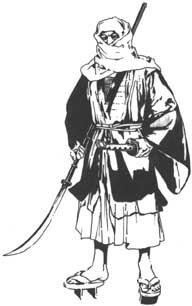 Warrior monks had existed in Japan since the end of the Japanese classical age. At first, they simply existed to fight other monks; much of religion was politics, so when two monasteries had a feud, often violence would break out. For over two hundred years, the Sohei merely existed to fight each other in small temple conflicts.

All this changed when the Genpei war, one of the many great civil wars of Japan, began. The two warring clans, the Minamoto and the Taira, wished to bolster their samurai forces, and appealed to the now many warrior monasteries. Both sides obtained help from various groups, and their skill in battle was famous.

After the Genpei war, the monks went back to rebuilding their monasteries, and didn't really participate in the wars of the next couple hundred years, once again only fighting each other. The Onin war started in 1467, localized in Kyoto, where many monasteries were, so much of the Sohei could no longer be passive. This conflict grew into a nation-wide civil war, now known as the Sengoku Jidai.

Meanwhile, in the countryside, a new face of the warrior monks arose; the Ikko-Ikki. These religious fanatics believed in the downfall of the Feudal system, and led a peasant rebellion against the Samurai rulers. Many of the daimyo lords, including Tokugawa Ieyasu, future founder of the Tokugawa Shogunate, sent armies to fight the rebels. The Ikko Ikki took began to spread, conquering more land, but eventually, in 1580, they were defeated.

While the next twenty years saw more warrior monks siding with various forces, when Japan was unified under Tokugawa, the time of the warrior monk ended.

While the Sohei knights have fought numerous bloody battles in Feudal Japan, even fighting rival temples and rebelling against the samurai class, the monks are isolated only in conflicts in Japan. The Hospitallers have fought almost all around the world like fighting the Crusades, against the Timur and Ottoman invasions, and even fighting in the Napoleonic wars.

The knights only fight mostly to defend Christian pilgrims and Christian territories. Unlike other European factions in the Medieval Ages, they seldom go out murdering or massacring non-Christians. The Sohei however, especially those part of the Ikko Ikki rebellion, were known for their brutal destruction of rival towns and temples, utterly massacring everyone that stood in their way.

Both holy warriors were known for their iron will and never surrender attitude in the face of impossible odds. The Knights have fought through some of the most legendary last stands in military history such as the Siege of Smyrna and the Siege of Malta. In cases like those, the Hospitallers are always outnumbered by the thousands. The Sohei has also fought in many great last stands like Benkei's killing of 300 samurais, and the Seige of Ishiyama Hongan-ji led by Kōsa.

In a small port somewhere in the coast of Japan, five Sohei monks were meditating peacefully on the sandy beach. Suddenly, a large pontoon boat landed on shore and disrupted their meditation. Five armored knights hospitallers landed on the beach carrying their banners.

. But before he can regain himself, an angry hospitaller drives his knightly sword right through the Sohei

One of the Sohei grabs a horse and rides to the knights, firing his arrows. His shots however, only glanced on the armor and shields of the knights. A knight with a halberd quickly skewers the Sohei off his horse and chucks his body in the air like a ragdoll

As this was going on, a Sohei and a knight faces off with their swords. While the knight had the upperhand with his superior steel longsword against the weaker katana, the Sohei managed to land a lucky blow on the knight's leg, making him fall down dripping with blood. He then raised his sword and coup de grace the knight with a stab to the abdomen

. But before he can savor his victory, he is shot with a crossbow bolt from behind by a knight

Suddenly, a shot rang out, and a knight falls down dead after getting hit by a tanegishima musket on the chest

. The knights quickly dove to the sand for cover as the remaining Sohei's fire their bows and muskets at them. A knight managed to grab his matchlock musket and shot a Sohei

. But the superior accuracy of the Japanese musket kept them pin down. The knight lets out one bolt from his crossbow and hits a Sohei in the eye

Wanting to finish this once and for all, the head knight chased and mounted the horse that was left behind by the dead Sohei as his comrade covered hi with his musket. The two remaining knights, one on foot and one on horseback, charged towards the remaining Sohei camped in the sand dunes. The Sohei lets out another shot and hit the rushing knight in the neck

. But it was too late for him to reload as the other knight on horseback hacks him with his sword. The wounded Sohei tried desperately to get away, but the knight hospitaller finally decapitates him.

The victorious knight then raised his sword and yells in victory.

The knights won because they have the overall better weapons and x-factors since they were better experienced and had better feats in wars. The Sohei's were fighting wars only in Japan while the Knights fough wars all across the globe.