Last round the ODST took down the cybermen (6-2)

Nathan Hale: The Sentinal who fought against the Chimera threat to save the Human race from extintion. 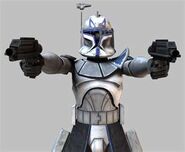 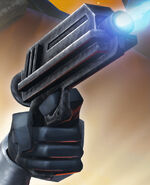 DC-15 blaster rifle being used by a clone trooper

Thermal Detonator
Add a photo to this gallery

Hedgehog Grenade
Add a photo to this gallery

My personal edge goes to captain rex. He has the more advanced weaponry and better training

“You think you so tough, try fighting me then”

Hale pulls the trigger on his wraith but all he hears is the dredded clicking noise. "God dammit" he shouts angrily and takes out his marksman and fires several well placed shots at the clone trooper captain. Rex rolls to the side, dodging all of the bullets. He takes out his blaster rifle and fires back but hale easily dodges the lasers. This firefight goes on for a little while untill hale runs out of ammo. "S**t" he says and hurls his marksman at the clone trooper, who ducks away from it, giving hale enough time to draw his magnum. He fires a shot at rex which hits him in the arm, knocking him back with the explosive round. Rex is shocked by the power of the small revolver but he soon shakes off the blast. Slinging his blaster rifle over his back he takes out his blaster pistols out and rapidly fires them at the sentinal how is forced to take cover behind a half destroyed fence.

Hale peeks the barrel of his gun through a hole in the fence and continues firing at his opponent but rex is not stupid and he blasts massive holes through the fence, burning through the barrel of the magnum. Hale shakes off the burning sensation in his hand he takes out a hedgehog brenade and hurls it at the ground in front of the clone trooper. Rex laughes at the grenades failure and takes a step forward but just as he does the grenade flies into the air and sharpnel rains down on rex, who instintivly holds his hands up to cover his face. He armour absorbes some of the damage but he is still badley injured by the blast.

Hale takes out his combat knife and charges at the clone trooper who takes out his vibroblade and gets into a fighting stance. Hale starts the attack with several quick slashes and thrusts but rex blocks each of them with suprising ease. He then stabs hale in the side of the stomach, the vibrating blade doing hevay damage to hale's stomach. The Sentinal roars in pain and grabs the clone captain but the arms and hurls him to the ground. Rex gets back to his feet slowly, still recovering from his wounds and takes out a thermal detonator. Charging at hale agains he swings his knife at him, which hale easily ducks under. However he is met with a grenade to the face and is knocked to the ground. Rex runs off and leaves hale furiously tugging on the grenade but it is stuck firmly to his face. Its not long before the blast goes off and hale's cold, faceless body lies non-moving on the floor. Rex holds his chest and breaths heavily before collapsing on the floor.

Rex wakes up to find the a surgen leaning over him, smiling cheeisly. "Wha where am i" he says bewildered. "Your in the medical bay Mr CC-7567" the surgen replies "You took quite a nasty blow from a grenade but you we have removed all the sharpnel and you should be fit to fight again in a few days". Rex groans as he stretches his arms out and rests his head into the pillow. "Do you mind if i just rest here for a while" rex says and the surgen pulls his face away from the clone trooper captain. "Sure have a nice rest" he says and leaves the room. Rex looks up at the celing before his eyes slowly droop shut and he drifs into the land of nod. Winner Captain Rex

Rex won due to his more advancd weaponry and training despite hale's multi-fuctional weapons.

This round ends on friday the 14th of october and next round is the first round of the quater finals. Whoooooooo

Retrieved from "https://deadliestfiction.fandom.com/wiki/User_blog:Wassboss/Last_16:Captain_Rex_vs_Nathan_Hale?oldid=60785"
Community content is available under CC-BY-SA unless otherwise noted.