I'm a simple guy. I love comic books, sci-fi, movies, novels and video games. I enjoy reading comics of all sorts. From JLA to Punisher, I love them all. If you know me, you'll know I'll always be available to help with anything about them. Another one of my great loves is Transformers. I grew up with the G1 re-runs that Cartoon Network played and I never looked back. From the age of 3 I have always loved them and would consider myself an amateur expert on the subject. I enjoy writing and reading. 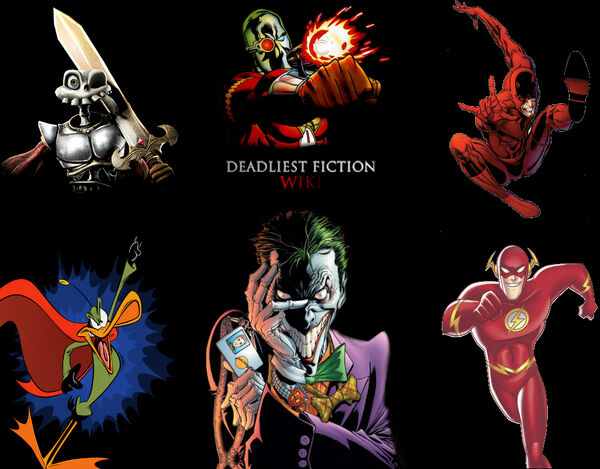 This is my sandbox: http://deadliestfiction.wikia.com/wiki/User:Thundrtri/Sandbox

This is my 2nd sandbox: http://deadliestfiction.wikia.com/wiki/User:Thundrtri/Sandbox2

Joshua Quinton grew up reading about heroes and their quests, slaying beasts and fighting the Trojans. When he grew up, he became a proffessor of ancient history at Princeton University. At the age of 29, he was asked to join an Achaelogical dig in Greece to uncover the possible burial grounds of the great hero, Achilles. When they uncovered the tomb, he was shot by a gold burst of light. He later woke up 1 week later in a hospital in Greece. During that week, his mind was flooded with messages of god-like beings. Upon his return to the US, he discovered that these messages were from the Olympian Gods. When the Gods call upon him, he is transformed into the reincarnated form of Achilles, called back from the dead to fight off the last of the villains of Olympus. These include various monsters such as the Hydra, Nemean Lion, Medusa, and the Chimera. He also fought the decendants of Circe and King Meidas as well as the reincarnation of his arch-nemesis Prince Hector among many, many other foes. In the form of Achilles he retains all of the great greek-hero's memories, personality traits and skills. Each victim he kills, is banished to Tartarus for an eternal life of suffering.

Transformation into Achilles: When the Gods call upon him, Joshua is immediately transformed into Achilles with all of his powers. The armor of the gods is bestowed on him which covers his body and is extremely light and strong.