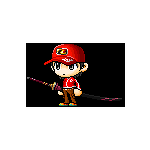 aka They call me Kazanshin

Basically, I'm a Japano-Canadian with viking, celtic and samurai origins. I practice karate, kendo and Jigen-ryu Nodachi (which hurt my knee af). I'm fairly (and by fairly, I mean very) knowledgeable in ancient Japanese weapons, warriors and warfare tactics, as well as ancient Japanese myths and to a slightly lesser degree more modern Japanese military/criminal organizations such as the JSDF and the Yakuza. I also believe myself to have fair knowledge about 16th-17th century warriors overall. I like Jojo's Bizarre Adventure and some other anime, although I mostly use my free time napping around and doing other non-productive stuff.

So, who am I? To sum it up, I'm a white Japanese highscholar who likes swords.

Agloolik, as he is called by the deity known as "火山神", is the chief of an Inuit tribe codenamed "Maritimus

5" by the deity. He was one of the 10 Inuit leaders to be teleported to an island created by 火山神, which they shared with multiple other tribes from around the world, such as the Aztecs, the Tui Tonga, the Mapuche, the Apache and multiple others. Living in the northernmost part of the island, the Inuits lived their classic hunter way of life, until one of the villages, Maritimus 3, was raided and destroyed by a raiding party of Aztecs. After Martitimus 7 and Maritimus 9 met the same fate, Agloolik assembled the other Inuit leaders and decided with them that the villages should band together in a bigger settlement to defend themselves against the invaders, who, unknowingly to the Inuit, were also in conflict with the other tribal cultures due to their aggressive nature. After banding together, the Inuits built fortifications of wood and bone around the settlement, then fought for the first time a major battle against a force of Aztec raiders, who were defeated through the used of snow traps, war wolves and a quick attack in the rear by the arctic natives. Agloolik and his men then marched to counterattack against the Aztecs, from whom they copied the idea of wearing beast-like helmets to create their very own "Bear Warriors" and "Wolf Warriors". However, the warriors were ambushed by Apachean tribes, forcing them to retreat back to their homelands. After multiple more battles against the Aztec warriors of the city codenamed "Onca 1" and their warleader "Tezcatlipoca", the Aztecs and the Inuits finally made peace, just in time for the unforeseen introduction of a Spanish army of conquistadors by 火山神. The Aztecs, the Inuits and their Tui Tongan allies led by "Tangaloa", fought back against the Spanish, and managed to chase them out of the island after the battle known as the Battle of Carnivora, when the Inuits used the shock factor of war dogs and wolves to their advantage while showering the Spanish with arrows alongside the Aztecs, and finally putting the icing on the cake with a Tonga charge. The Spanish retreated from the island, at which point 火山神 warped them out of the world and back to Spain.

In his childhood, Nobuzumi Tsuda was raised by his mother and father alongside his brothers as the son of Oda Nobuyuki, brother of Nobunaga. He was taught the way of Bushido, as well as how a samurai must act with honor and that a daimyo must seek what is right for the clan. However, upon the death of his father by the hand of his uncle, Nobuzumi (Nobushige at that time) pleaded for his life and that of his brother to Nobunaga. As a result, he was spared, but separated from his brother. While being raised by Nobunaga's vassal Shibata Katsuie, Nobushige learned military tactics and read the Art of War of Sun Tzu. He, however, learned one thing on his own: bushido is not something worth putting your life on, and should be discarded to protect yourself and those around you. At the age of 15, he was already out in the fields alongside his reunited brother, leading Nobunaga's men against multiple foes around Japan. It was during that period that he met multiple of his greatest allies in the future, including Fatafehi, monrch of the Tu'i Tonga dynasty, and Queen Elizabeth the First of England.

As years passed, Nobuzumi's name kept rising in fame, but behind the scenes, he kept using his brother and his band of ninjas to sabotage and assassinate his political rivals under Nobunaga, including many of his own cousins. At the time of Nobunaga's death at the hands of Mitsuhide Akechi, Nobuzumi was one of the top contender for the Daimyo's throne, especially with all but the youngest of Nobunaga's sons dead (most at the hands of Nobuzumi). He was ultimately chosen as his uncle's heir, and used his newfound power to crush all opposing factions in the clan, including Hashiba Hideyoshi, who he blamed of plotting against him. With all rivals struck down, Nobuzumi conquered the rest of Japan, flipped the Ashikaga Shogunate upside down and established the Tsuda Shogunate. After this event, he took a break from war for a year, during which he contemplated his next steps, all the while establishing lasting relations with the British Empire and the Tu'i Tonga Dynasty, who he helped reclaim power from rival dynasties.

After the break, Nobuzumi did what some of you probably expected: the invasions of the Korean peninsula (after bribing Chinese officials into tricking the Ming to not interfere). He was, of course, met by Yi Sun Sin, but the naval warfare took a different turn, mostly thanks to the new ship Nobuzumi had created: the Itachi Bune (Weasel Ship). Based on European galleon ships bought from Britain, this ship made for better mobility and speed than the original galleon, at the cost of durability and lighter armament. It was however still capable of besting the turtle ships, albeit only after multiple defeats and victories of mixed results. After finally besting the Korean navy, he sent his land forces which made the inexperienced and less trained Koreans suffer defeat after defeat, until he had taken over almost all of the lands of the Joseon dynasty, at which point he made peace with what remained of the Joseon Dynasty in 1580. After the destruction of his rivals, Nobuzumi silenced a few Jurchen clans who spoke too loudly of their opposition against the Shogunate and declared war against the Ming Dynasty. The war was far harder fought than against the Joseon, mainly because of the greater size of China and the better experienced troops of the Dynasty. However, even with these obstacles, the Japanese army of samurais, aided by the Tongans, a handfull of English knights, Korean auxiliaries and Jurchen/Mongol mercenaries used Nobuzumi's siege tactics and superior mastery of the musket to outmatch their Chinese foes.

After securing alliances with Vietnamese and Thai kingdoms, the forces of the Tsuda Shogunate moved on to crush the Jurchen and Manchurian forces who still opposed the Shogun. All the while, Queen Elizabeth was slowly starting to fear the power of the Shogunate, but her friendship with Nobuzumi and his gift of multiple Chinese cities which allowed her to control the spice, tea and silk trade made her change her mind. Fatafehi's Dynasty moved on, with some Japanese allies, to conquer Papua New Guinea and Indonesia. Nobuzumi died in 1622 at the age of 82 during his Manchurian campaigns, leaving behind him a Shogunate that lasted for 300 years, after which they lost control of a large part of Manchuria and some parts of China.

Siege: Pummel, fire and rain Used during most sieges of the invasion of Joseon Korea, Nobuzumi bombarded his foes with his Tosekiki catapults packed with pots full of burning oil and/or gunpowder, which would ignite the fort's wooden structures and cause chaos. He would then move his hiya tsutsu rocket arrow launchers and otsutsu hand mortars in the front and bombard the front walls to rid them of the archer and musketeers defending them. Finally, he would move his bow armed samurai (an later mongol and korean auxiliaries) in to rain arrows down his enemies to finish them off. The survivors would be killed in melee combat by an assaulting force.

Field: Force the attack While Nobuzumi was a brilliant defender and siege attacker, attacking enemy forces head on was never his favorite action. As such, during field battles, he would use his bombard-catapults and cannons to bombard the enemy until they would decide to come and attack or retreat. Once in a defensive position, musket armed troops would break the charge, yari armed ones would push them back, naginata and nodachi armed ones would combat them in close quarters and archers would rain down arrows in the enemy's rear lines. Cavalry was also sometimes used to harass enemies with missile fire or charge in their rear during the pike confrontation.

Masaru-Jerome Surei was a Canadian-Japanese highscholar, the son of the Canadian embassador in Japan, attending Kaminomiya Highschool. From his early childhood he had a very independent personality and preferred being depended on than depending on someone. During his days in Japan, he met Sotojima Haruka, a girl who's father was a prominent politician in Japan. Because of the mental stress from her father's death, Haruka had almost completely secluded herself from the outside world, and as such found herself attracted to Masaru, who became the first one to interact and sympathize with her about her father's fate. This soon turned into a complete and psycopathic obsession with the Canadian teenager as the two fought Bōryokudan thugs sent against Haruka by family members who seeked to rob her of her father's inheritance. The girl begun seeing Masaru as a "knight in shining armor" who was the only one in the world who cared for her and protected her. Her mental state wasn't helped by the fact that Masaru made her kill her family members once they cornered them.

Eventually, however, Haruka became incapable of bearing the stress and guilt of murder and being constantly under attack by assassins. Because of this, she did what any Yandere in love would do: she asked Masaru to commit suicide with her so they could be forever together. Masaru obviously refused, and Haruka, being the Yandere she was, tried to kill him, only for the Canadian to best her in combat and kill her back. In the last moments of his girlfriend life, Masaru revealed to her that her father had been assassinated by a joint Canadian-American operation because of his anti-American ideologies. He then told her the only reason he kept her close to him was because he enjoyed seeing her fall into insanity and become completely dependant on him. He then shoots her in the head, killing the poor Yandere. In Masaru's words, however, "she was already dead before I pulled the trigger". After this, Masaru Gets away with the murder with some help from the Canadian government and contacts in the Japanese government and moves to China, where he "plans to look for another locked-up princess".

Retrieved from "https://deadliestfiction.fandom.com/wiki/User:Kazanshin?oldid=324588"
Community content is available under CC-BY-SA unless otherwise noted.