This is a line up of warriors and battles I plan on making or doing.

False Shepherds: The Wolves (OCF) vs The Seventh Kalvary (Watchmen)

Tonight on Deadliest Fiction, we have a showdown between two groups, hidden by masks, recruited by silver-tongued leaders, and used as a weapon to further a sinister agenda! Prepare to be astounded as The Wolves, masked cultists who waged a war on crime, do battle with the Seventh Kalvary, the white supremacist terror group fighting to restore white rule in America! It's an all-out war as we compare their weapons, skills, and abilities to determine... 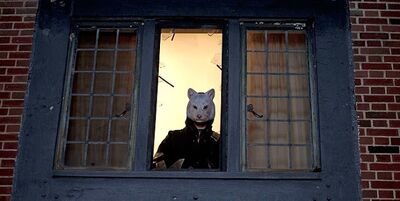 The Wolves were a gang formed in the late 70s by Jefferson Tala, Charles Schrader, and Randall and Phillip Flagg in New York City. Despite their small numbers, the group became a feared faction in the New York underworld thanks to the steady influence and leadership of Tala before expanding across the country. Though the others were content with their successes, Tala's ambition proved far greater and he quickly picked up a career in politics, successfully winning election as Senator of New York in 2000. Preoccupied with his career, Tala was largely powerless to stop his former friends from usurping his role in the Wolves, leaving him to hatch a plan, started when Tala advised Schrader to have two junkies that robbed the gang killed, then adopted the child as his own, giving him the best schooling and training possible.

When the child, Edward Wesker, turned 18, Tala pushed for his initiation into the Wolves, setting him up to be mentored by Jack O'Leary, a widely-respected and noble enforcer for the New York sect of the group. O'Leary's kindness and sense of morality rubbed off on Alpha, who tuned his rhetoric to convince Jack that the current leadership was corrupt and a danger to society. With Jack in his corner, Edward began hatching his plan, winning over other prominent members before recruiting Jack Renard, a corrupt and underappreciated undercover cop, and Piper Watson, a prostitute forced into slavery by the Wolves, as his top assassins. When the leadership grew wary of him, Edward sprung his trap, using their attempt to kill him as pretext to launch a coup. In a matter of days, Edward wiped out the original leadership and the vast majority of their loyalists and crowned himself "Alpha" of the new Wolves, and quickly reformed the group towards more ethical operations and recruiting the downtrodden and outcasts of society, with Jack and Tala as trusted advisors. In reality, Alpha's morality was a ruse designed to win followers, and he had inherited his adopted father's ruthless outlook and lust for power, though this secret was known by very few.

The Wolves enjoyed three years of prosperity, going as far as to ally themselves with a British gang also calling themselves the Wolves, peaking when they joined the New York Alliance, a criminal alliance consisting of Omnia Venena, Cicada, the United Crime Corps, and the Appalachian Vipers, and battled the Miami Triangle for control of North America. Following their victory, the Wolves were manipulated into a catastrophic war with the Vipers, leading to hundreds of deaths, the shattering of the Alliance, and the betrayal of Tala, which forced Alpha to kill his mentor and take shelter in London, leaving Jack to run the gang's operations.

This isolation made Alpha deeply resentful, fracturing his relationship with his second-in-command, and was helped along by Jack's friendship and apparent subservience to Eddie "Vulcan" Brooksford, leader of the fearsome Suns of Vulcan, and British Wolves leader Alexander Greaves, both of whom urged Jack to take command from his egotistical protege. During the Fall of the Vulcans, a misunderstanding led Alpha to believe Jack was plotting his demise, and he launched a preemptive strike that failed, leading to a violent civil war that killed Renard and most of Alpha's loyalists before culminating in his apparent death in a shootout in an abandoned hotel. Jack reluctantly took the title of Alpha and attempted to properly reform the gang to match Alpha's supposed vision, but he was in turn assassinated five years later by a pro-Alpha fanatic.

Without stable leadership, the group collapsed for good, though centuries later Alpha's teachings would find popularity on the planet Bliss, with this new neo-Wolves clashing with detective Remy Yousser and his assistant, R'yth Thirman. 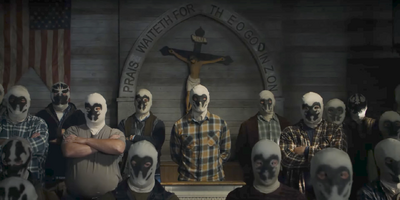 Inspired by the diary of the deceased vigilante Rorschach, The Seventh Kalvary is a domestic terror cell based out of Oklahoma and formed by US Senator Joe Keene, with the backing of the decades old "Cyclops" conspiracy, who radicalized much of the group's membership by revealing the truth of the alien attack in New York in 1985, showing the "alien" was a creation by genius Adrian Veidt and arguing that the attack was a liberal plot to destroy the American way of life. Railing against the reforms of President Robert Redford, Keene set himself up as an apparent presidential frontrunner before working with police chief Judd Crawford to organize "the White Night", a night where the Kalvary launched an assault on every cop in the state, killing several and badly wounding many more. In the wake of the tragedy, Keene pushed for legislation to protect the identity of police officers, alongside investigating the apparent return of Dr. Manhattan, who had apparently intervened to save Officer Angela Abar during the White Night.

Initially sending the Kalvary underground, Keene has them re-emerge in 2019, building a machine to steal the power of Dr. Manhattan, with one attempt to smuggle equipment stumbled upon a police officer who is shot and critically injured. In response to the shooting, the police and their vigilante detectives launch a full investigation, with Abar in particular coming close to unmasking the conspiracy, though Keene manages to briefly stymie her by forcing her partner, Wade Tillman, to give her up to Agent Laurie Blake. Though Tillman escapes an attempt on his life, Keene is able to uncover the identity of Dr. Manhattan as Calvin Abar, Angela's husband, and the Kalvary assault their home and use a special gun to capture Manhattan.

With all opposition seemingly defeated, Keene revealed to Agent Blake his intention to steal the power of Manhattan and use it to restore America back to it's "glory days". In the midst of his gloating, Keene is interrupted by Lady Trieu, billionaire scientist and inventor, who reveals that she had secretly manipulated Keene and the Kalvary the entire time, using them to build the machine and capture Manhattan while she continued to play the part of an eccentric inventor. After Keene is killed when Manhattan's power overwhelms his body, Trieu swiftly kills the rest of the Kalvary and Cyclops, though she is herself defeated by the return of Veidt.

Fate of the World: The Anti-Monitor (Crisis on Infinite Earths) vs Heaven Ascension Dio (JoJo's Bizarre Adventure: Eyes of Heaven)

May You Live In Interesting Times: Jesse Faden (Control) vs Cole MacGrath (inFamous)

Tonight on Deadliest Fiction, the month of horror continues with a clash of hunters as L, the world's greatest detective, matches wits with Hannibal Lecter, the Chesapeake Ripper who outsmarted and outmatched the FBI for years! It's a careful chess game between two of the greatest minds in the world, but only one can walk away!

The Red Hoods Are Coming!: Arsenal (Arrow) vs Eggsy

Retrieved from "https://deadliestfiction.fandom.com/wiki/User:BeastMan14/Sandbox?oldid=335795"
Community content is available under CC-BY-SA unless otherwise noted.